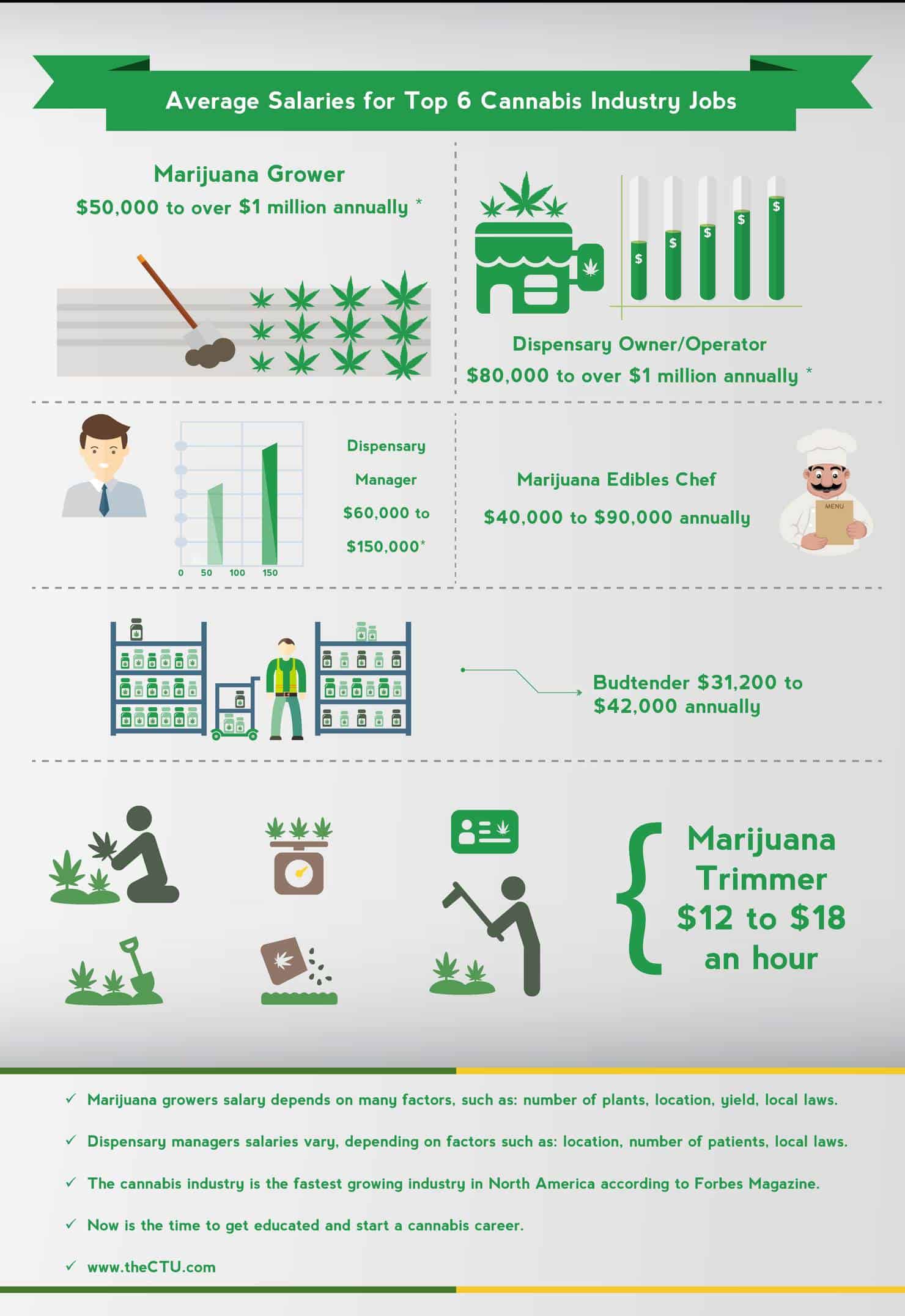 Marijuana growers earn on average $50,000 to over $1 million annually.
These figures vary greatly based on which state the grow is located in, how many plants are grown, and how the laws are as far as legally selling cannabis that is cultivated.

Some of the best states to make a good living growing marijuana in are:
California, Oregon, Arizona, Colorado, Maine, Michigan, and Massachusetts.

When looking at cannabis job salaries being a marijuana grower is the most sought after position by cannabis career applicants.

To learn how to grow marijuana it is suggested to sign up for an online cannabis college.

For example, Harborside Medical dispensary in San Jose, California reportedly does over $20 million in annual sales.

Dispensary managers are responsible for the day-to-day operations at medical marijuana dispensaries, or even at recreational cannabis stores.

Dispensary managers are often hired from within after starting as a budtender or cannabis trimmer.

When looking at cannabis job salaries the position of marijuana edibles chef comes up as one of the most popular positions in the cannabis industry.

Salaries depend on how big of a company they are employed by. How many cannabis edibles they create and sell. How many dispensaries carry their line of edibles.

To learn how to cook with cannabis and start your own cannabis edibles business it is best to do so online.

Budtender’s earn on average $31,200 to $42,000 per year. Budtender jobs are very competitive and only the most educated applicants are usually chosen.

Budtender’s are responsible for choosing cannabis strains for medical marijuana patients, as well as customer service and patient education.

Budtending is one of the most popular marijuana jobs. Budtenders are most often found in: California, Colorado, Oregon, Washington, Maine, Michigan, Massachusetts, Rhode Island, Nevada, and soon to be many others.

Marijuana Trimmers make on average $12 to $18 per hour, although some of the best cannabis trimmers can earn over $30 an hour.

Although the need for cannabis trimmers is expected to steadily clim each year and grow to many more states.

*Cannabis job salaries vary greatly based on which state you live in and which cannabis company you are hired by.

Cannabis companies aren’t just paying higher salaries than comparable jobs that are not in the marijuana industry. They’re also providing benefits packages, too.

According to Vangst’s salary guide, vision and dental benefits increased by almost 15 percent from 2018. The number of companies that offered no benefits decreased by 7.5 percent.

Cannabis salaries differences exist beyond the job description. Where you work also determines how much you make. Salary data analyzed by Marijuana Business Daily uncovered some surprising weed salary differences between states in April 2019.

Maryland paid more than other states in all categories including dispensary manager, cannabis extractor, trimmer, and budtender.

Master cultivators are paid more in Ohio, Pennsylvania, Massachusetts, California, and Maryland compared to those in Rhode Island, Illinois, Colorado, and Alaska. Their salary in Massachusetts is between $120,000 to $150,000 per year.

California and Washington state paid their trimmers less than trimmers in Colorado. Colorado pays between $12 and $16 per hour for trimmers, while California trimmers earn between $10 and $12.50 per hour.

Colorado’s developed and robust medical and recreational cannabis sector is primed for expansion with new job opportunities. In Colorado, a master extractor can earn up to $70,000 a year.

Budtender hourly pay in Colorado is about $12.78 per hour on average based on data from Indeed. Common budtender benefits include store discounts, paid sick time, and flexible schedules. A marijuana grower’s average salary in Colorado reaches $51,000 and up to $73,000 a year.

A November 2018 report released shortly after legalization by Statistics Canada found that cannabis-related jobs pay $29.58 per hour compared to the Canadian average of $27.03 per hour.

Cannabis industry salaries can even exceed six figures. For example, British Columbia’s Liquor and Distribution Branch has listed positions reaching up to $112,000 a year.

While cannabis cultivation is big in Canada, other cannabis sectors that are hiring include educational services, health care, and retail shops.

Based on Statistics Canada’s report, the highest level of marijuana-related employment was in Ontario with an estimated 5,700 jobs as of Nov. 2018. These numbers are expected to steadily rise.

Canada’s agriculture industry is seeing enormous gains from cultivating cannabis. A 2018 survey conducted by Cannabis At Work found pay scales for cannabis cultivation jobs are increasing faster than other jobs in the marijuana market.

According to CEO Alison McMahon, job salaries for cultivation manager, quality assurance, processing assistant, and cultivation technician have gone up. Some cultivation-related job salaries have even increased by 14 percent.

A quality assurance position in Alberta could earn an average of $103,000 a year. Master growers in Canada can expect about $81,000 annually. Despite the need to fill cannabis cultivation positions, applicants need job training to stand out.

One of the biggest Canadian producers is Aurora Cannabis. According to job descriptions, Aurora Cannabis’ annual marijuana salaries include the following:

How to get a job in the marijuana industry

To become the best possible cannabis candidate and to learn how to write a cannabis resume, be sure to enroll to the leading cannabis training destination, Cannabis Training University.

Anyone interested in finding a marijuana job or starting a cannabis business will benefit from online training at the best marijuana college, Cannabis Training University.

Start a cannabis career or marijuana job with online cannabis training at the industry-leading marijuana school.