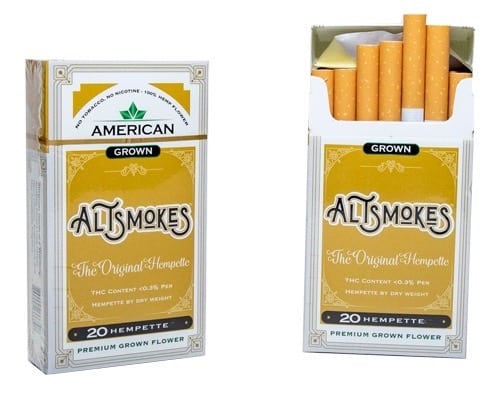 If you’re looking for an alternative to traditional nicotine cigarettes, AltSmokes’ premium hemp cigarettes are made from 100% American-grown hemp and deliver a relaxing experience without tobacco or nicotine.

AltSmokes’ hempettes are the latest and greatest hemp cigarettes that are taking the industry by storm. Whether you’re looking for a healthier alternative to tobacco or simply want to find a way to relax, AltSmokes offers a superior hemp product for the modern smoker.

From the rolling foothills and great smoky mountains of Tennessee, comes a hemp brand made for smokers of all stripes. A hemp brand that values quality, all-natural products with visually striking packaging.

Based in Smithville, Tennessee, AltSmokes began as a simple but powerful idea over the holidays in 2019. CEO Bryan Wyka and President Crede Colgan joined entrepreneurial forces to create one of the best CBD cigarettes on the market today.

A good hemp cigarette starts off with high-quality hemp.

Since 2018, Crede had been growing hemp. The duo came up with the concept of creating hemp cigarettes that use premium hemp for a better taste and flavor than everything else that’s out there. Shortly after, they went full steam ahead with the operation and literally hand-rolled thousands of hempettes.

They began selling, passing them out, and seeing how the public reacted to them. They were an instant success.

AltSmokes stands by a simple credo, according to Wyka in an interview with the leading trade publication B2B Wholesaler Mag: to help deliver “a cleaner, smoother, filtered smokable hemp product that helps people chill out and overcome nicotine addictions.”

What Are AltSmokes’ Hemp Cigarettes?

Hempettes aren’t your traditional weed joints. They’re made of hemp flower with low THC (0.3%), just CBD from the hemp plant. It’s the perfect way to chill and relax without the high.

AltSmokes works with farmers in Tennessee to grow American-grown hemp made from 100% premium hemp flower.

All hempettes from AltSmokes contain American-grown hemp packed with a full spectrum of cannabinoids and terpenes. AltSmokes uses the following to create a premium smoking experience:

AltSmokes’ hemp cigarettes are for sale online from their website.

What Makes AltSmokes Stand Out Among the Rest?

Apart from delivering full transparency of the hemp inside the hempettes, AltSmokes delivers a superior CBD cigarette because they’re one of a handful of companies that don’t remove the CBD from the flower before it manufactures its product.

Cannabidiol (CBD) elicits relaxing and clear-headed effects without the high feeling you get from smoking THC. Along with other minor cannabinoids, CBD’s relaxing effects are amplified for a chiller experience.

Its manufacturing process is fully certified by the ATF, so you can have peace of mind knowing you’re smoking high-quality CBD cigarettes that meet the federal agency’s rigorous manufacturing standards. No shortcuts are taken here.

Last but not least, AltSmokes delivers hemp cigarettes that smell and taste considerably better than even the leading competitors. Upon opening the packet, you’ll notice an all-natural aroma of pure-grown hemp. It’s the difference you can smell and taste.

AltSmokes offers a variety of hemp cigarettes to quit smoking or just to relax and feel at peace. 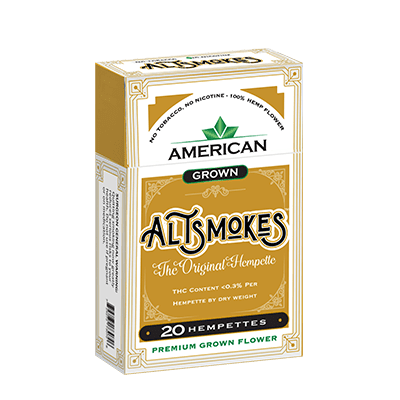 Classic, clean, and smooth. That’s what you get with the Original Hempettes. An unadulterated product allowing hemp’s natural flavor and aroma to shine through.

Go with this classic ready-to-smoke hemp CBD cigarette for a smooth hit time after time. 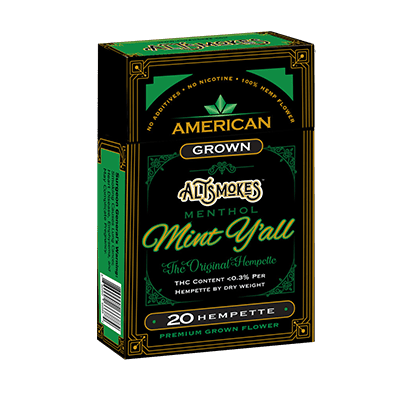 Inhale, exhale, and relax with Mint Y’all’ Hempettes. These minty-fresh cigarettes deliver a cooling and refreshing smoke for those who like a hint of mint with their hemp.

Feel the intense freshness of menthol. Mint Y’all is just like the Original Hempettes with a mint twist. 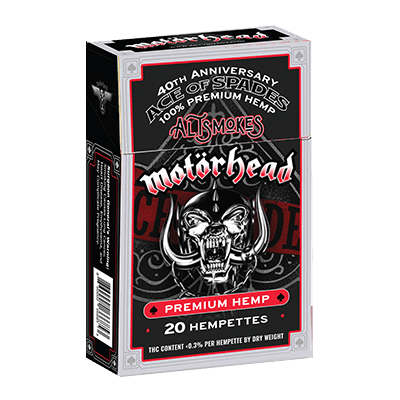 Keep rocking and rolling with AltSmokes’ exciting collaboration with the classic punk rock band Motörhead. Share your love for the band and hemp with these all-natural hempettes. 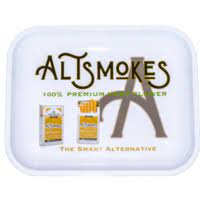 Looking for a functional and stylish rolling tray to pack your own pre-roll?

AltSmokes has got you covered. Shop a clean and white rolling tray with the AltSmokes logo and an image of the hempettes package. Sleek, minimalist, and functional. It’s the perfect gift for the smoker in your life.

In today’s fast-growing hemp market, it can be tough to weed out the quality hemp brands from the rest. AltSmokes makes it easy to see the hemp test results of its products.

Find testing results from third-party testing companies directly on their website. You’ll see a certificate of analysis (COA) that includes the concentration of cannabinoids, pesticides, and heavy metals found in the hemp flower.

It’s never been easier to confirm the quality of your smokeable hemp flower.

Check out their distributor form to get a first-time buyer’s discount on the up-and-coming hemp smokes. Discounts are available by the size of the order. Visit their website, send an email to rockon@altsmokes.com, or give them a call at 248-202-8230.

Cannabis Training University is thrilled to showcase the industry’s hottest products on the market. For more brand spotlights, product reviews, and industry news, subscribe to our cannabis blog to stay up-to-date with the latest developments.