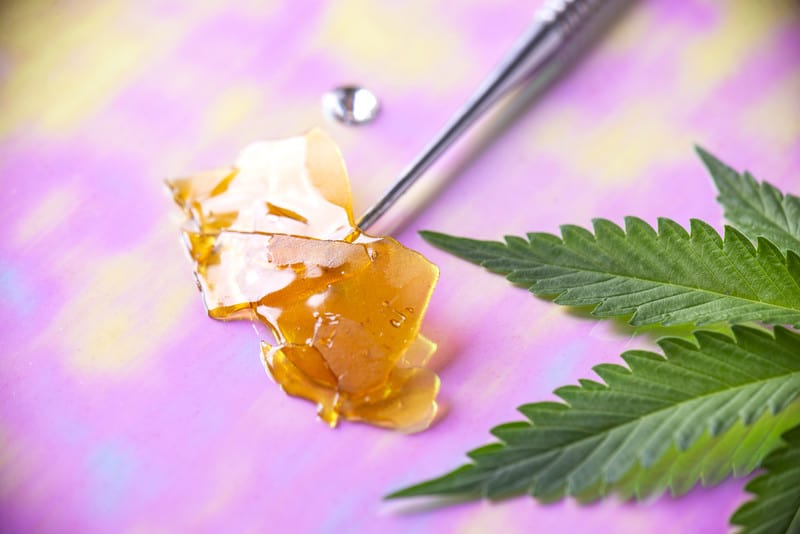 What is shatter weed? In short, shatter is a pure form, super-strength cannabis extract that is hard and translucent with a look that mimics a piece of glass. And lest we mention the incredible high THC and/or CBD percentage that one gram of this cannabis gold contains.

Believed to be a most gorgeous type of weed products available today, shatter is highly sought-after. Let us commence by providing a detailed answer to the question: What is Shatter Weed?

To more accurately answer the question of ‘What is Shatter Weed’, we can provide an additional definition. Shatter is, inherently and physically, butane hash oil that has gone through a vacuuming process in an oven, and is made by using large amounts of highly flammable butane gas that helps strip the THC out. What is left is a glass-like extract that hardens, to look like cooled honeycomb.

As for the industry expert definition, it’s similar to ours in stapling it as a type of cannabis extract, created by doing an extract of the plant’s essential oil, which contains the highest concentration of cannabinoids and terpenes. Almost needless to say, the word shatter means it pertains to the texture of the cannabis concentrate that shatters similarly to glass if broken.

Making its mark on the scene in a shattering way in the early 2010’s, this particular cannabis extract provides consumers with a radical new way to smoke their favorite strains. Gaining popularity ever-more in the US and across the globe, weed shatter is the next best thing in the cannabis industry.

In this article, we go beyond answering the question of ‘what is shatter weed’, by putting the shatter in the spotlight in exploring its origins, how it’s made and how it’s used.

A Brief History of Shatter Weed

Shatter is a new development within the history of weed consumption, of which can be dated back to the ancient production of hashish. By the mid-1990’s, the process of modern cannabis marijuana production became more refined, and shatter was produced for the first time in the U.S.

In 1989, the second edition of the 1973 book Cannabis Alchemy: The Art of Modern Hash making, included the first well outlined details of how to make hashish – the first known cannabis concentrate. Subsequently, in 1990, another medical technologist published the second edition of his 1977 book that went into further into hash production methods.

In the late 90’s Budderking from Canada was the first to market shatter and cannabis budder and get their products into dispensaries.

In 2005, the production processes were published in Cannabis culture magazine. And sure as daylight, by the 2010s, it emerged as a leader in weed consumption with dab rigs adding onto the commercial cannabis paraphernalia market.

How Shatter Weed is Used

All shatter is able to be dabbed, but not all dabs are in the form of shatter. As a popular method of consuming shatter, the thoughtful act of dabbing’ requires a water pipe, or more aptly called a rig with a flat bowl. This contraption is attached to a ‘nail’ that is designed to withstand high heat.

In this case, you can dab your shatter weed, similarly done to dabbing other cannabis concentrates: Preheat the nail with a small butane or propane torch and let it heat up to the right high temperature. Using the flat end of the dabber, drop a small amount of shatter onto the hot nail, and the concentrate will instantly vaporize.

The next step is to place a cap over the nail to grab all the vapor, then inhale it through an open spot on the rig. Consuming shatter in the right manner means investing in proper dabbing tools. The temperature of the nail at the moment of consumption also affects the flavor and may alter the effects, which brings us to the next section.

The biggest benefit of dabbing shatter is that it offers a very quick method for cannabinoids to make it into the bloodstream, offering a quick onset of desirable recreational and medicinal effects. And because of the increased potency of shatter, alongside its terpene-rich flavors and aromas, it allows some users to use less since they require less of it to reach their desired level of intoxication.

With that said, dabbing shatter means the elimination of large amounts of burning plant material which can effect some users negatively such as wheezing in the lungs. And, instead of smoking a joint or blunt with a paper-based material and exposing the lungs to harmful chemicals, a user can dab only 1 or 2 times to get the desired number of cannabinoids, all the while only inhaling vapor.

In summary, the health benefits of high-quality cannabis shatter start with the very same benefits that medical marijuana has, although in more concentrated doses. High-CBD strains with little to no psych activity are especially effective at providing relief from symptoms such as chronic pain, sleeplessness, anxiety.

How Shatter Weed is Made (Don’t Try This at Home!)

We added this section just in case you’re wondering and possibly considering your own hand at shatter making. But beware, it’s a very hazardous and dangerous process, and best left to the experts.

Be aware that for safety and health reasons, producing extracts should be left to professionals, as the safety precautions and equipment requires utmost precision, accuracy, and expertise.

For interest’s sake then, we can at least share how it’s made. Cannabis extracts are created by passing large amounts of butane isopropyl, or CO2, through fresh ground cannabis material, producing a thick, goldish cannabis oil full of THC and CBD. Next, the solvent is purged oil using heat and vacuum, resultant in shatter.

In Conclusion: Respect the Nectar of the Gods

Shatter, as the latest addition to the family of cannabis concentrates, is growing in popularity and availability. With places slowly on the concentrate bandwagon, you can find shatter, wax, budder, honey, and oil at cannabis dispensaries throughout the U.S. With that said, uninformed cannabis tourists can easily stumble upon its strength, unexpectedly.

There is a push from the cannabis community to educate people about marijuana safety and consuming responsibly. This will make it easier for people to acquire concentrates that are pure and were manufactured under professional, safe conditions.

It will also ensure that whether they’re using concentrates like shatter for medical or recreational purposes, novices know how to proceed cautiously. Ensuring that their experience with shatter is a positive one.

To learn more about various concentrates and extractions, enroll in Cannabis Training University!