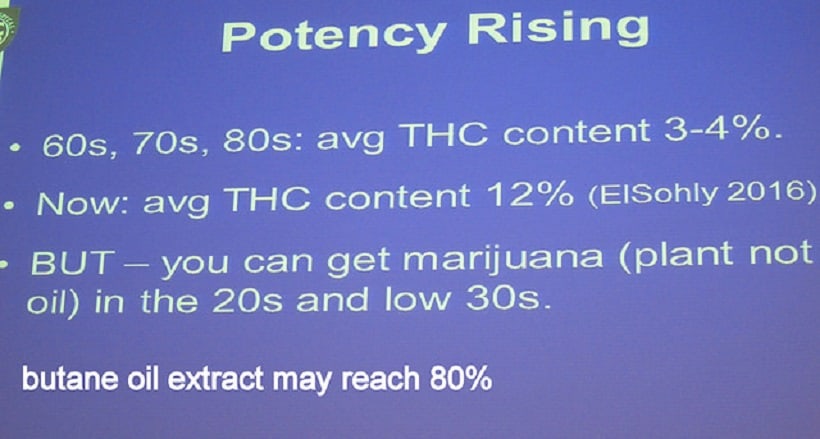 If you haven’t noticed it before, there are many older individuals that believe marijuana potency has increased in recent years. Do you agree? Millenials or the younger generation does want to see the increase in marijuana potency. In fact, they don’t mind at all. Marijuana is coming from humble beginnings and has a unique and distinct history surrounding its spread in the United States. The primary psychoactive element in marijuana is THC, which, in 1975, had an average use of less than one percent and in 1985, it increased to three percent. These lower levels reflect the times we live in and the condition of the cannabis industry. In the black market, marijuana is grown in other countries and smuggled to the United States. However, due to the legalization of marijuana in several states, this has reduced the smuggling actions of drug cartels as it relates to weed. California, for example has legalized medical cannabis since the 1990s and the marijuana potency experienced its initial explosion then. The average marijuana strains since 1995 to 2014 have increased three times; up to twelve percent.

In the past decade, more marijuana growers have resorted to growing weed indoors in hydroponic labs. If you grow weed outdoors, you can always move the plants indoors, controlling where it is being harvested and optimizing its environment for improved quality. In addition, cannabis growers have implemented strategic methods for a better harvest. This includes trimming fan leaves and lowering plant shoots so energy can be diverted to the top of the marijuana plant instead. These methods are highly effective for increasing marijuana potency.

Prohibition of marijuana has been simplified by legalization. However, the federal government is not in line with legalization, even when it has been approved by some states. For that reason, it is recommended that breeders should strive for higher marijuana potency to hide weed from federal authorities. What does this mean? Well, if people can use a smaller amount of weed to get high, growers do not have to harvest in huge amounts to attract the eyes of federal authorities. This means that there is less weed to sell and to transport as well as to grow and harvest. If you were to review history, you would see that is what was done to hard liquor as it grw in popularity over the years of prohibition. So, the conclusion is high marijuana potency in smaller quantities, the easier it is to be hidden from prying eyes.

Demand from the Consumer

Not everyone has the same tolerance of THC. The more that you consume marijuana is the more you will want it so you can get that desired impact that you may have grown accustomed to.  Of course, the less that you consume it, the better it will be on your pocket and your lungs. When the marijuana potency and quality is higher, you will find that it is in more demand from consumers. In many cases, the heightened potency makes users want to choose methods like vaping. Why is this important? Well, vaporizers handle higher marijuana potency in comparison to choosing to smoke a joint.

As marijuana becomes legal in more states and more people choose alternative treatment for their qualifying medical conditions, breeders have to increase the marijuana potency in terms of CBD concentrates. Extractors and breeders, these days, are working in conjunction to find and create the highest and best strains that contain CBD. This is done so as to ensure patients are getting the best for their ailments and disorders. Learn more about marijuana potency by visiting the Cannabis Training University.