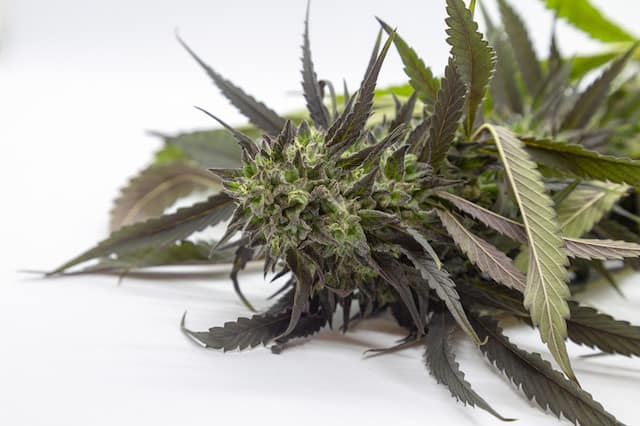 We’ll answer all these and many more questions about ditch weed in the subsequent paragraphs. Cannabis plants grow in many different varieties, and ditch weed is just one of them.

One distinguishing characteristic of ditch weed is its low or negligible tetrahydrocannabinol (THC) content. You’ll usually find them growing in the ditch, off the roadside, or places, where they weren’t planted or tended by choice.

Some people smoke ditch weed, but the effect you get from it is not comparable to that obtainable from a well-grown marijuana strain.

Nonetheless, according to reports from a handful of consumers, ditch weed still produces a classic cannabis high if dried and appropriately cured. However, this isn’t generally the case.

One exciting thing about ditch weed is that they grow in numbers, i.e., you’ll typically find many of them growing on their own. Perhaps the lack of human care and tending is why they are deficient in THC.

Early in the 20th century, farmers and many locals observed (in line with the report of the U.S. Division of Agriculture) cannabis growing in the wild and abundance in many Midwestern territories, including western Iowa, Missouri, and southern Minnesota.

To date, ditch weed continues to grow, even in Nebraska, Indiana, and Kansas. If you take a road trip across Kansas, Iowa, Minnesota, and Nebraska, you’ll notice them growing in large fields, distinguished by their tall green leaves and pungent odor.

It would interest you to know that the United States Drug Enforcement Administration believes that 90-98% of weed consumed by lots of folks in the US is a feral weed.

Generally speaking, the legal status of cannabis in the United States can be a tad confusing in the sense that the laws governing the growing, sale, and use of cannabis differ from state to state. Ditch weed, despite being very low in THC, is not exempt from regulations.

Expectedly, whether the level of THC is high or low, if in the wrong hands and used inappropriately, significant damage may arise.

A considerable amount of effort exercised by the DEA is actually channeled towards eradicating ditch weed from America. In 1979, the DEA created the Domestic Cannabis Eradication/Suppression program. The program uses federal funds to eradicate the growth and spread of ditch weed.

Within 13 years, the program eradicated over 118 million feral weed plants, whereas only 6 million cannabis plants were deliberately cultivated within the same period.

According to a report published online in the Sourcebook of Criminal Justice Statistics, approximately 99% of all marijuana eradicated by the DEA in the Domestic Cannabis Eradication/Suppression Program in 2003 was a ditch or feral hemp and was not cultivated.

This is not only worrisome, but it also calls for more work to be done in getting rid of ditch plants.

The proliferation of ditch weed seems out of control in some places, so much so that authorities have given up the fight altogether.

In Indiana, for instance, the government has totally abandoned weed eradication because of the continued sporadic spread of the plant and, of course, the funds expended in trying to check the growth of unwanted cannabis plants.

Surprisingly, some people engage in nefarious acts that undermine the efforts of the authorities in this regard. It’s common practice to maneuver the law by planting and cultivating marijuana seeds in the ditch and then returning later to harvest the plant.

The DEA believes that marijuana found growing in the ditch occurred naturally and was not cultivated. The police are actually on the lookout for persons engaged in this practice, especially in states where marijuana is not allowed for any use whatsoever.

How To Identify Wild Weed

Wild weed can grow as tall as 8-9 feet. Because it is not tended like indoor-grown or properly farmed weed, it’s leaves are often not as sticky. Also, as already mentioned, you’ll mostly notice them in ditches and waysides. But most significantly, you can identify the wild or feral weed by their negligible psychoactive effect. This means that they have deficient levels of THC in them.

Can You Smoke Ditch Weed?

People smoke ditch weed, but the experience does not compare with smoking a good roll of joint made from a well-grown cannabis bud. Smoking it will hardly get you high. Therefore, if you want the juice or primary substance in marijuana, ditch weed would be the last option you want to turn to.

Cannabis ruderalis is a type of ditch weed commonly found in some parts of Europe and Russia. They are neither Sativa nor Indica, but like a regular feral weed, they have very low THC.

Get a low cost and easy to use kit for growing pot at home with a discount here at a Pot for Pot.

Ditch weed is another name for wild or feral weed. Typically, they are neither ideal for recreational or medicinal use. Some believe that they are offshoots of some random hemp plants from the 20th century, but studies so far maintain that ditch weed was descended from industrial hemp plants many years ago.

We hope the information provided in this piece rightly answers your questions. The world of cannabis is rich and broad, and so is its potential for benefits.

To find out more and grow your understanding of marijuana and its many uses, you can enroll for an online course in cannabis training at the Cannabis Training University, a foremost faculty in cannabis education.