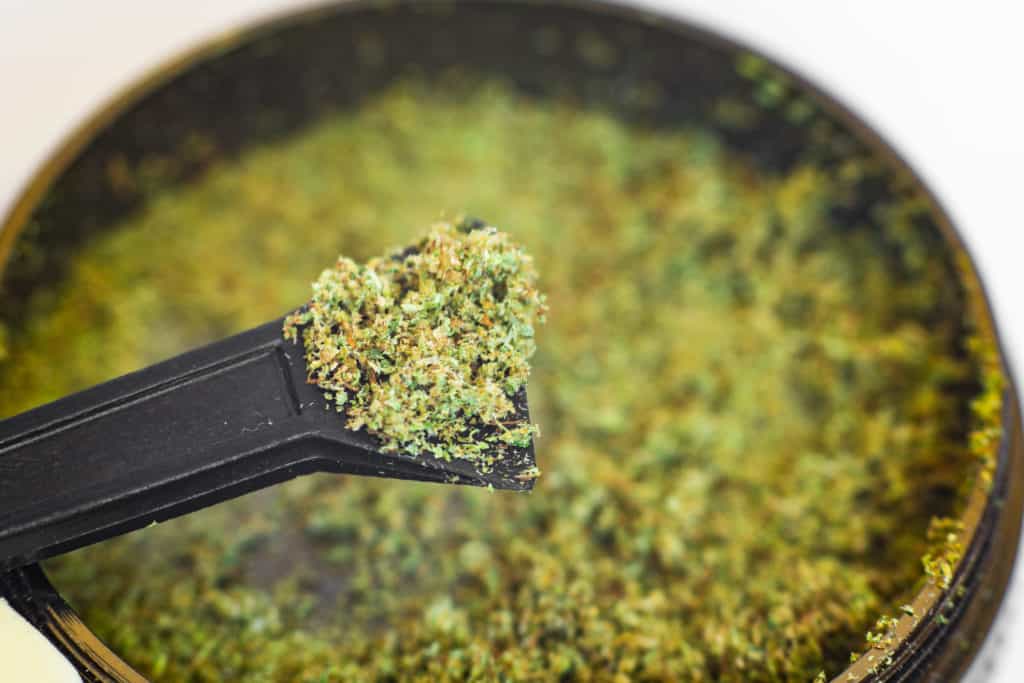 Ever wondered the best way to decarb kief? Decarboxylation, also known as decarbing, is a vital part of the process used to make marijuana-infused edibles potent and long-lasting. In the simplest terms, decarbing occurs when you heat raw cannabis buds, leaves, or stems. This activates the chemical compounds in cannabis.

Kief, also known as dry sift or pollen, is a critical part of the cannabis plant. This powdery substance holds the plant’s essential and therapeutic oils. When using kief for cannabis edibles or concentrates, it’s important to decarb it for maximum potency and effectiveness.

The decarbing of cannabis occurs when the chemical components are heated. This happens when users smoke or vaporize dry herb. When lit or vaporized, a chemical reaction activates the compounds that are responsible for cannabis’ psychotropic effects. Raw cannabis buds, leaves, and stems contain trichomes that make up the kief. The trichomes are most heavily concentrated on the marijuana flowers (nugs).

The trichomes in cannabis contain a high concentration of non-intoxicating compounds such as tetrahydrocannabinolic acid (THCA) and cannabidiolic acid (CBDA). Other cannabinoids exist, but THCA and CBDA are usually present in the most abundance. When ingested without heating first, THCA and CBDA won’t make users feel high (although they do have medicinal benefits in that state).

When cannabis is heated at a certain temperature for a certain amount of time, the THCA and CBDA molecules lose a carboxyl group (COOH), releasing carbon dioxide and water vapor. As a result, THCA and CBDA convert into the intoxicating tetrahydrocannabinol (THC) and non-intoxicating cannabidiol (CBD).

No matter what type of raw cannabis material you use, you’ll need to decarb your cannabis to get the most out of your trichomes. Using cannabis without decarboxylation can lead to some psychoactivity, but not as much as if the material were decarbed. Conventional decarbing options include a stove, oven, sous vide (hot water bath), or another kitchen heating device. 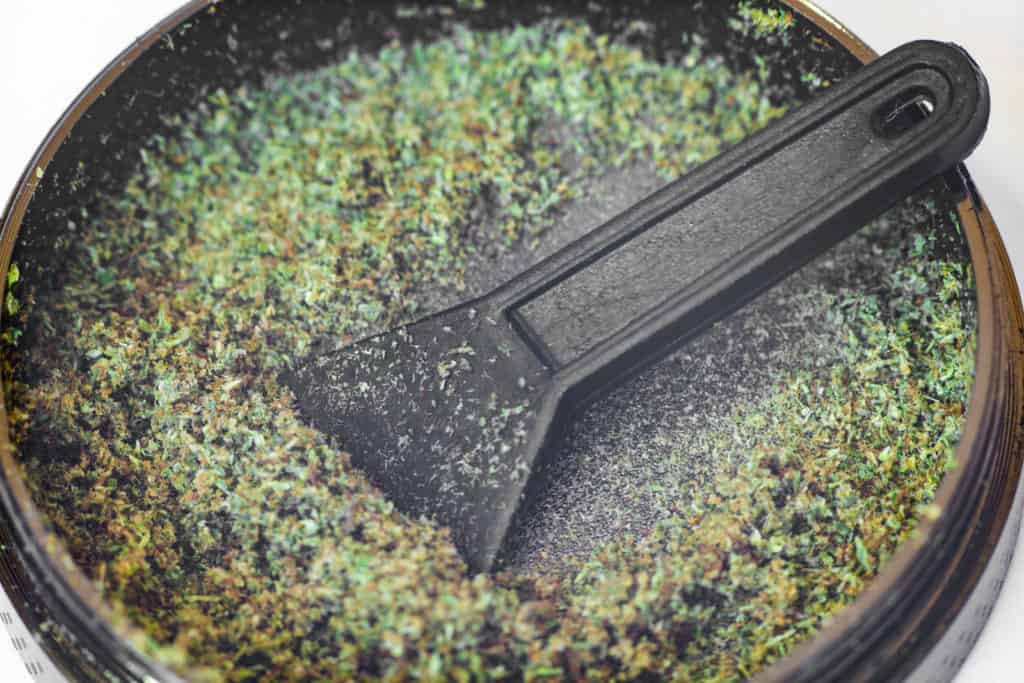 Kief is made from the milky white or amber-colored trichome glands that exist on cannabis flowers, leaves, and stems. Kief usually contains tiny pieces of plant fiber that are collected with the trichomes. The trichomes are made of a waxy substance that contains a sticky resin. You can often feel this adhesive resin when you break up a freshly cured bud. Kief can also be found in between a cannabis grinder’s teeth, screen, and all throughout its interior after grinding weed a few times.

Trichomes may be small, but they contain the plant’s strong and psychoactive chemical compounds, including cannabinoids, terpenes, and flavonoids. From an evolutionary perspective, the aromatic odors and effects prevent animals from eating the plant, while also attracting potential pollinators with the fragrant scent.

How to Collect Kief

Kief and kief-derived products have a long history of use. One of the easiest, but time-intensive ways to collect kief is to buy a three-chamber weed grinder. The top of the chamber holds the lid and grinder teeth. The middle compartment collects the bud and a screen in between filters loose kief into a bottom compartment that you can dip into once enough kief has accumulated.

You can also collect kief by using a kief box, also known as a pollen box. It is generally a box with a cover, a screen, and a collection surface below the screen. After you grind your weed, you can store it in one of these handy boxes. Or, break up your bud right in the box. Either way, the kief sifts to the bottom, where you can collect it for further processing.

Another easy option to obtain kief is to buy pre-collected kief from a licensed retailer. This is usually produced from a water hash process. Home-sifting has become a popular method to collect large amounts of kief for personal consumption. Dry-sift kief requires multiple fine mesh screens.

Kief is typically between 75 and 125 microns and requires mesh screens between 80 and 270 LPI. These mesh screens can be stacked from largest to smallest size to filter out plant matter from the trichome resin.

How to Decarb Kief

Now that you have your kief, you can begin the decarbing process. Decarboxylation machines can help first-time users or those short on time. Tools such as Ardent Nova are specifically made for botanical extraction. You can fit up to an ounce or more of kief in a decarboxylating container designed for flower. Once you close the lid, you press a button and the device does the heavy lifting. You can have decarboxylated kief in about an hour.

You can also decarb your kief using a sous vide machine, which uses hot water to evenly decarboxylate your cannabis. Set the sous vide for 90 minutes at 203 degrees Fahrenheit (95 degrees Celsius). Put your kief in a closed silicon container, seal it in a vacuum sealer, and drop it into the hot water. Turn the machine on, and you’ll have perfectly decarbed kief in 90 minutes! The amount of kief you need depends on the specific cannabis recipe you are using.

You can also heat your kief in the oven. Set the oven to between 245ºF to 250ºF and heat the kief inside an ovenproof dish covered with at least two layers of tin foil. Convection ovens are preferred to ensure even heating throughout. Heat the kief for 20 to 40 minutes. According to some users, CBD-rich strains may require longer decarbing periods, ranging from 40 to 50 minutes.

After you’ve decarboxylated your cannabis or kief, you can use it in a myriad of ways. Infuse it into an oil or cannabutter or sprinkle it on food as a psychoactive garnish. When pressed, decarbed kief makes an excellent hash. You can press it in a hash press, roll it with a hot water bottle, or even put it in your shoe! Breaking open the decarbed trichomes imparts a layered flavor that some pot consumers love.

There are many ways to decarb kief, each with their pros and cons. If you want to learn more about working with cannabis, enroll in Cannabis Training University’s certification program. Learn all about cannabis cooking, extraction, medicine, laws, and other marijuana essentials. A well-rounded education is a crucial component to becoming creating effective and potent cannabis and kief-infused products.

Decarbing kief or any other cannabis matter is easy using common kitchen tools, but can create a pungent odor. The strain’s unique aroma depends on its genetics and growing conditions. The potency of the odor when decarbing kief depends on the decarbing method, strain, and amount of kief used.

Utilizing the sous vide method of decarbing kief can notably reduce the smell. Decarbing machines can also significantly reduce the smell of decarbed kief. Despite these decarboxylation methods, however, there will be some detectable odor, which can dissipate within a few hours or the day.

Users employ a variety of methods to reduce the smell of weed such as using an air freshener or incense to mask the smell. Others have cooked with stronger flavors while decarbing kief or any other marijuana material. Users can fry up some garlic or fish to have a delicious meal and tone down the decarbed kief smell.

Do You Need To Decarb Kief Before Smoking?

Generally, users don’t need to decarb kief before smoking it, but they can definitely smoke decarbed kief. Some users have claimed that decarboxylating cannabis and then smoking or vaporizing it produces noticeably better experiences, while others don’t notice a difference.

Cannabis decarbs through heating methods such as when combusting the flower, kief, or other concentrates with a lighter or vaporizing the product. Some dry-herb vaporizers can be efficient at vaporizing ground material mixed with kief. Dry-herb vaporizers aren’t designed to handle kief alone.

Apart from heating, cannabis goes through the decarboxylation process when aged or cured. Curing and aging weed involves managing a number of unpredictable variables such as temperature and humidity. Additionally, different cannabis compounds decarb at different temperatures.

How To Store Decarbed Kief

After decarbing kief, many cannabis consumers may be wondering how to store it.

Decarbed kief can be placed in a mason jar or other airtight container and then in a cool and dark location such as a cabinet or drawer. Light and heat can lower the decarbed kief’s potency, while moisture can increase the chance of mold formation in the container.

Users should avoid putting decarbed kief or un-decarbed kief, for that matter, in a plastic baggie. Plastic has a static charge that can stick to kief like glue.

Some users believe that decarbed kief can be kept for as long as six months without noticing any significant loss of THC or CBD.

Ardent Cannabis, a producer of a decarbing machine, experimented with THC-dominant and CBD-dominant decarbed cannabis through its decarbing machine and placed them in a cool, dark drawer for a little under six months.

The Sour Apple strain showed no significant loss of THC during the storage period. A small amount of THC converted to cannabinol (CBN). Both the initial and six-month sample had nearly identical THC amounts over 19 percent THC.

Lilly Hill, a CBD-dominant strain, experienced a mild CBD degradation with a reduction of about 30 mg per gram. The initial buds tested at 18.5 percent CBD., while the stored sample had 15.84 percent.

Over time, cannabis compounds will degrade through the slow and steady process of decarboxylation. THCA converts to THC and then the sleep-inducing CBN compound.

A number of decarb machines out there are useful for cannabis flower, leaves, and concentrates such as kief. Below, you’ll find a few of the most popular decarbing machines along with a few key points.

Ardent’s Nova Decarboxylator ($210) comes in a striking purple color. The small kitchen device can hold up to one ounce of flower or five ounces of kief. Pre-set heat temperatures and durations make decarbing a cinch.

For best results, Ardent recommends decarbing anywhere from ¼ to 1 ounce of flower or three to five ounces of kief. Grab a 110v version for U.S. residents or a 220v decarbing machine for international users.

Levo’s latest device, the Levo II ($349.99), is a minimalist, smart, and modern device that can power up your decarbing process. Users can choose from a variety of colors. The Levo app streamlines decarbing cannabis flower or kief.

One setting is for drying herbs to extend their shelf life and another is to activate cannabis before infusing it into a meal. The app allows users to check their cooking history and use Levo’s useful time and temperature calculator, as well as find cannabis recipes.

BluSky’s Butter Machine ($99.99) comes with a complete decarbing kit featuring the main unit, a silicon heat resistant glove, stainless strainer, and cookbook. Its compact design can handle up to five cups and can make cannabutter in as little as 45 minutes.

The TX Infuzium 420 Herbal Infuser ($134.80) lets users work with as little as one cup to as much as four cups. The complete kit comes with everything you need to make delicious edibles. The Infuzium comes with an inclusive cookbook with over 80 recipes.

Learn more about decarboxylation and cannabis infused products at the top cannabis training school online. Get certified online as a cannabis chef at CTU. Start your own cannabis edibles business. Learn from industry experts.