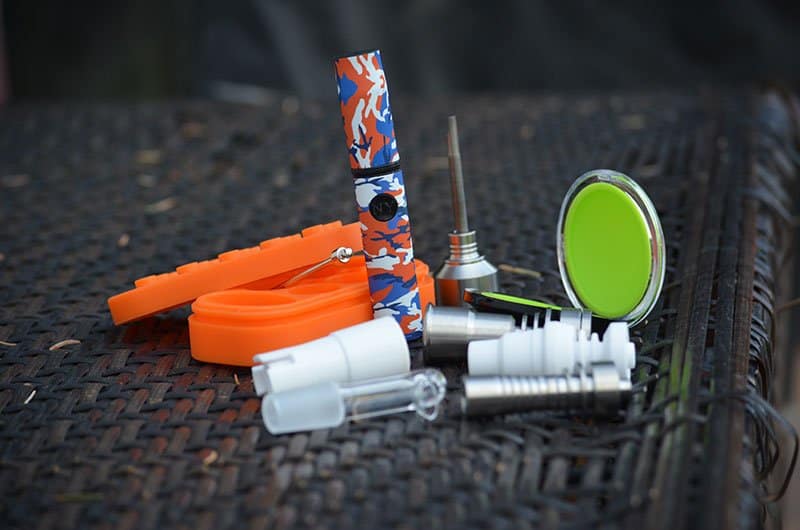 In the world of cannabis, the highly potent concentrate known as wax has been gaining popularity over the past decade. Cannabis wax gets its name from its wax-like consistency. However, it is nothing like your standard household beeswax. This substance is created by putting cannabis into a chamber and blasting it with a pressurized gas, usually butane. This pressure forces the cannabinoids off the bud, creating a wax-like substance with an incredibly high amount of THC that can be consumed.

There are two ways to consume wax. The traditional method involves what is known as a dab rig, a bong-like pipe with a nail rather than a bowl. This method requires a torch to super heat the rig’s nail to vaporize the wax. Vaping is the other method of consuming wax. A Wax vaporizer works much like a traditional vape. The user can place their wax onto a coil in the vape’s chamber. Then simply hold a button to heat the coil and vaporize the wax.

While both techniques are popular across the globe, each one has its own benefits. In the following text, we will cover how each method works. Also, go over the pros and cons of each to help you decide which way is best for you.

Convective heat is the best method to avoid burning and carbonizing your concentrates and producing harmful compounds. While conduction heat can heat the wax more effectively and quicker producing highly potent dabs, convective heat can provide better flavor and aroma from your wax and reduces the risk of inhaling harsh compounds.

The Importance of Low-Temperature Dabbing

When vaping or dabbing wax, temperature regulation is critical. High temperatures can end up scorching your expensive wax and ruining your dab rig’s nail by giving it a hazy appearance or charring your vape pen’s chamber. High heat can get you instantly high, but high temperatures come with a cost.

One 1986 study found that cannabis can produce low levels of benzene, a common carcinogen, when heated, and even more so when heated over 365º F. Many vaporizers and e-nails can reach significantly higher than 365º F, but it’s not always smart to reach those temperatures. Whether you choose to vape or dab your wax, always keep temperature management top of mind.

Vaporizers are by far the easiest way to consume wax concentrates. Because of their size and convenience, and their low price compared to rigs, they are one of the most popular wax tools on the market. Wax Vaporizers have evolved into all sorts of shapes and sizes. As a common rule of evolution though, they have all adapted to working more or less the same way.

There are three main parts to a wax pen vaporizer: a battery, a chamber with a coil, and a mouthpiece. There are also two main styles of vape coils, a ceramic donut shaped coil and a quartz rod coil. Both are efficient at vaporizing wax. Some people prefer ceramic as it retains heat longer than quartz and is good for vaping at lower temperatures. Quartz, on the other hand, heats faster and gives off a pure taste, though it does not retain heat as well as ceramic.

To find out more about the different types of cannabis vaporizers for wax, check out our guide to marijuana vaporizers blog post where we cover table top vaporizers, dry herb vaporizers, vape pens, and vape modifications. Just make sure you differentiate between vaporizers intended strictly for flower and ones designed to handle the sticky and oily consistency of many cannabis concentrates. Some vaporizers can work for both dry herb and extracts.

Using a wax vaporizer is simple. To start, you would remove the mouthpiece that is covering the heating chamber. Then you would apply wax to the coil inside the chamber. In general, a wax vaporizer can hold enough wax for a single vape session. You don’t want to use too much, nor too little. Just a portion big enough to cover the coil. Many wax vaporizers will also come with a metal poker, known as a dabbing tool, that you can use to put the wax in the chamber.

Once the wax is in place, you would place the mouthpiece back over the chamber and turn the battery on. Then, to start vaping, you would simply hold the fire button. This sends an electrical current to the coil, making it as hot as an oven, and subsequently converting the wax into a smooth vapor. Depending on the type of coil, it usually takes a few seconds to get hot enough to vaporize the wax.

Over the past few years, the technology inside wax vaporizers have gotten more advanced. These days you can get vapes that have variable heat settings so you can adjust how hot the chamber gets. This allows you to fine tune the amount of vapor you get with each hit. Different temperatures can also affect the taste of the wax, especially since some wax concentrates vaporize better at higher or lower temperatures.

Often you will hear someone refer to taking dabs while using a wax vaporizer. They may even refer to their wax vape as a dab pen. However, the term dab refers to an altogether different method of consuming wax concentrates.

Dabbing wax involves a special setup called a dab rig. This rig is comprised of a few main parts: a mouth piece, a domeless nail that vaporizes the wax, and a reservoir of water that cools the vapor, much like a bong or bubbler. The nail is the most important part of the rig, as that is where the wax is converted into vapor. Much like a coil, the nail comes in three varieties, quartz, ceramic, or titanium.

To take a dab with a rig, you first start by heating the nail. Wax takes a lot of heat to be turned into vapor, so heating the nail requires a strong flame. A simple lighter will not do, instead, people generally use a butane torch. You would hold the flame of this torch to the nail until it glows red. Then, using a dabbing tool, you would scoop up a small amount of wax, then run it across the head of the nail in a circular pattern. The heat and motion then turn the wax into a hot vapor, which passes and cools through the water reservoir and travels into your lungs. As a rule of thumb, you want to take a big pull through the mouthpiece as you vaporize the wax. This will ensure all the vapor makes it to your lungs.

Temperature control is crucial to get the most aromatic and flavorful vapor possible. Investing in an infrared thermometer, especially one built for dabs can lead to a better dabbing experience. For instance, devices like the Terpometer allow you to gauge the ideal temperature of your banger for dropping your wax. An LCD display shows you the temperature of your nail’s surface in real time. The screen will illuminate green when the temperature is just right. It makes dabbing infinitely easier compared to the traditional way of keeping track of your heat up and cool-down times.

If the idea of using a torch seems intimidating, then there is a relatively new alternative known as an e-nail. This device takes the place of the standard nail on a rig. Instead of requiring heat from a torch, the e-nail heats itself through electricity. You plug it in to an outlet, place it in your rig, set a temperature. Once it heats up, you are ready to start dabbing. This makes the dabbing experience less intimidating and a lot easier compared to the standard method.

Now it is time to go over the main differences between the two methods of consuming wax. This will help you better decide which route is best for you.

Should I be Vaping or Dabbing Wax?

There are many differences between vaping wax and using a dab rig, and you may not be sure which method is best for you. The answer boils down to your own set of preferences, but also whether you are new to wax, or a seasoned consumer.

Wax vaporizers are a great starting point for anyone looking to get into wax. They are easier to use and tend to be much less expensive than a rig with all its components. Even a rookie can pick up a wax pen and figure it out within a few minutes, compared to a rig that will take some know how to get started and instructions on how to properly heat the nail with a torch.

A wax vaporizer is also far more portable than a dab rig. People who enjoy consuming their wax while on the go will find a vaporizer to be far more convenient. You also do not have to worry about sticking out in the crowd if you use a vaporizer in a public area, as no one will know what you are vaping. A dab rig, on the other hand, is usually a large glass piece, and though they come in smaller varieties, a rig still requires a torch or a special e-nail to properly vaporize wax.

However, dab rigs are not without their own benefits. People who have been consuming cannabis and concentrates for a while may tend to go with a rig. While wax vapes are certainly easier to use, most do not deliver hits as big or as powerful as a dab rig. A large nail supplied with a lot of heat can quickly vaporize a chunk of wax in seconds, delivering a huge, lung-filling hit.

What About Smoking Wax?

Smoking cannabis wax is a crude, yet fun way to consume your concentrates when you’re in a bind. Don’t have an extract vaporizer or dab rig on hand? No problem. Wax, like many other cannabis extracts, can be smoked to reach the highest peaks you’ve ever reached compared to cannabis flower. All you have to do is add your wax on top of your dried herb in your smoking vehicle: joint, bong, or glass pipe.

It’s important to note that smoking wax exposes your concentrate to extremely high temperatures causing it to combust instead of vaporize. Combustion not only produces a harsh-tasting smoke, but also degrades many of the wax’s volatile compounds, particularly some temperature-sensitive terpene compounds. Terpenes are the aromatic compounds that give cannabis a range of aromas including skunky, fruity, earthy, and spicy notes. For this reason, concentrates should be vaporized at low temperatures to reap more of the good stuff.

If you’re set on smoking your wax, you can roll it in a joint or add it in your bowl. For joints, add an even strip of wax lengthwise to go on top of the herb. In a glass pipe’s bowl, add as much wax as you want on top of your packed bowl. When working with wax, you may need to slightly heat the concentrate with the tip of your lighter to make it more pliable. Once the wax is malleable enough, collect your wax with a dabber of your choice.

At the end of the day, what method works best will depend on your circumstances. If you want something that is quick, easy, and portable, then a wax vaporizer will be your best friend. If you have experience and want something that will deliver a powerful hit within the comforts of home, then a dab rig will outshine a wax vape.

Make the Most Out of Your Wax

Dabbing and vaping wax is a great way to enjoy the fast-acting and long-lasting benefits of your cannabis concentrates. Cannabis wax can be used in a variety of ways. Enroll in CTU’s online marijuana college to learn how to cook with cannabis wax or even make your own concentrates. Sign up for CTU’s online cannabis training program today!