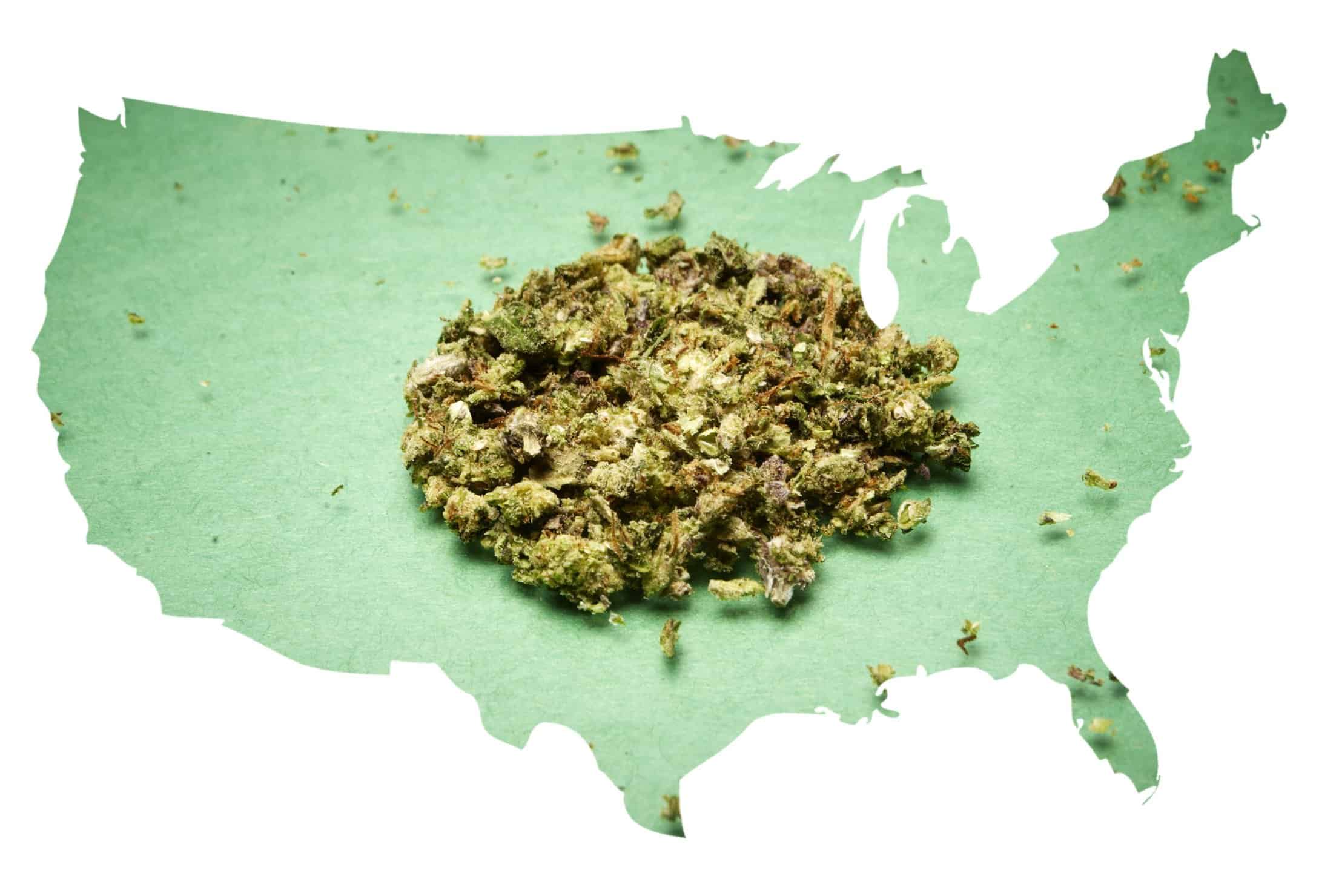 *UPDATE 11/7/2018: The election results are in! Legal cannabis has earned some major victories, but not everywhere. Check out each section below for a full update of the results by state.

The United States has seen a tremendous amount of marijuana reform. Each year, an increasing number of states have marijuana on the ballot for a variety of measures that will reshape and redefine cannabis policy, providing increasing numbers of people access to the plant. Whether it’s for medical or recreational use, the tide is turning nationwide as far as public perception and acceptance. There can be little disputing that the marijuana industry is here to stay.

The mid-term 2018 elections in November are no exception, and soon voters will be heading to the ballot boxes to cast their votes and let their opinions be known. Cannabis has been a hot topic in a variety of states this year, and in fall there are four states that will allow citizens to decide whether its use is acceptable for their regions. Two states will vote on recreational cannabis initiatives and possibly join Colorado, California, Washington, Oregon, Nevada, Alaska, Maine, and Vermont to completely decriminalize it. Two other states will vote about legal medical use to possible join 30 states where medical cannabis is already legal.

To learn more about cannabis on the ballot in 2018, let’s examine the four states that are seeking the most reform.

*UPDATE 11/7/2018: Michigan voters have spoken, and recreational cannabis use by adults has been approved! This makes Michigan the 10th state in the U.S. to approve recreational use. The measure – which allows adults to possess up to 2.5 ounces on their person, up to 10 ounces at home, and grow up to 12 plants for medical use – passed by a 56-44 margin. Public consumption and driving under the influence will remain illegal.

Full legalization will begin ten days after the vote itself, while the rules for a regulated and legal marketplace may take up to a year or more for the state to develop.

The state of Michigan has a highly anticipated vote that will decide whether recreational cannabis will be legal in the Great Lakes State. The Michigan initiative generated 277,300 valid signatures (252,523 signatures were required) to get marijuana on the ballot.

Michigan’s Proposal 1 would allow adults 21 years of age or older to purchase and possess cannabis. Retail sales would have a 10-percent excise tax, which would mostly be disbursed to local governments and the state’s education system. Michigan’s citizens would also have the right to grow up to 12 marijuana plants at their residences for personal use. Like other legal marijuana states, however, local jurisdictions could vote to ban or limit cannabis businesses within their regions.

From polls conducted in Michigan, the future of legal cannabis in the state is difficult to predict accurately. One poll, conducted by a group opposed to legalization, indicates that 47 percent of citizens oppose the measure, with a smaller 44 percent being in favor. Another poll, conducted by Michigan State University, paints a different picture. That poll concludes that 61 percent of Michiganians are in favor of legal cannabis, while only 34 percent are opposed.

With two major polls presenting conflicting information about the will of the Michigan people regarding legal marijuana, it seems that the vote there is anything but a slam dunk. Michigan will be a state to keep your eye on, because its vote may help shape the future outcomes of other midwestern states that are considering getting on the marijuana bandwagon.

*UPDATE 11/7/2018: The recreational adult-use cannabis measure in North Dakota failed to pass. Voters, who approved medical cannabis use in 2016, struck down the recreational measure by a 60-40 margin.

North Dakota, known for its conservative nature, comes out of left field for its progressive vote that may legalize recreational cannabis expunge past cannabis offenders. North Dakota, however, like Michigan, already allows the use of medical marijuana, so those two states, along with Minnesota, appear to be most progressive upper midwestern states with regard to cannabis decriminalization. The North Dakota ballot collected 14,600 valid signatures of a required 13,452 to put the vote before state residents in November.

Michigan’s Measure 3 (the Marijuana Legalization and Automatic Expungement Initiative) would legalize recreational marijuana for adult use in the state. Michigan’s vote has an interesting twist, because, if passed, it would expunge the legal record of anyone convicted of a marijuana-related crime in the past. Measure 3 would also lessen the penalty for people who sell or distribute cannabis to minors under the age of 21, putting it on an equal level with people who commit the same offense with alcohol. Michigan’s proposed legislation is as progressive as any seen so far in the U.S., which has come as a surprise to industry supporters and make it a state to watch closely.

Like Michigan, polls are divided about whether or not legal marijuana will become a reality in the state of North Dakota. The Bismarck Tribune maintains that only a mere 33 percent of state residents favor legalization, while an online poll (which usually appeal more to younger voters) two weeks earlier by the same media source concludes that 82 percent of residents agree with passing the measure. With poll results that are this inconclusive, it appears that the North Dakota voter outcome is anyone’s guess. Many industry insiders await November’s voter results with crossed fingers.

Garnering the support of 53% of voters, this medical cannabis measure allows patients with certain qualifying conditions (like AIDS or cancer) to obtain medical marijuana cards. However, it remains likely that state legislators will instead draft and pass their own medical cannabis bill, potentially overriding the ballot initiative.

Like North Dakota, Utah is known for its conservative policies, making the possibility of legal medical marijuana in the state seem unlikely to some. However, with a total of 113,143 valid signatures needed to put the vote on November’s ballot, a total of nearly 154,000 valid signatures were collected and verified by the state’s lieutenant governor earlier this year.

Utah’s Proposition 2, the Utah Medical Cannabis Act, if passed, would allow medical marijuana use for patients with qualifying conditions. Patients who qualify would have to receive a medical use card from their physicians. Card-carrying patients could purchase 2 ounces of unprocessed marijuana or 10 grams of processed THC or CBD within a two-week period. Smoking or vaping marijuana would not be allowed.

*UPDATE 11/7/2018: With 65% support from voters, Amendment 2 to the Missouri constitution officially legalized medical marijuana. This amendment allows qualifying medical cannabis patients to grow up to six flowering plants to treat their conditions, and patients must have a note from their physician approving cannabis use.

The state of Missouri differs from the other three states with legal marijuana measures on their ballots by having three separate medical marijuana initiatives on its ballot. Residents will have a lot to consider before casting their votes. All three initiatives received the necessary number of signatures required to put them on the ballot.

Missouri’s Amendment 2 would allow state-licensed physicians to recommend medical marijuana to their patients with qualifying conditions. Medical cannabis would have a 4 percent tax, with proceeds going to providing healthcare services to veterans. The revenue generated is projected to reach $24 million.

The second of Missouri’s proposed initiatives, Amendment 3, would allow the use of medical marijuana but tax it much higher, at 15 percent on all sales. This amendment is estimated to generate $66 million per year, but would cost the state much less ($500,000) to regulate compared to the $7 million estimated state operating cost for Amendment 2. Instead of going to military veterans, tax revenue generated by Amendment 2 would go to starting a biomedical research and drug development institute that would fund research and development of medication used for currently incurable diseases like cancer.

Proposition 3, the third of Missouri’s ballot initiatives but the only one that wouldn’t’ require a state constitution amendment, would allow state-licensed physicians to recommend medical marijuana to patients with qualifying conditions. Under Proposition 3, the medical marijuana tax would be the lowest of all three indicatives at only 2 percent. This tax would lead to a projective annual revenue of $10 million. The cost to the state for this initiative, however, is very high and expected to reach $10, which basically means the tax would pay for medical marijuana implementation and regulation. Tax revenue would specifically go toward veteran healthcare, drug treatment, law enforcement, and education.

Get Out and Vote!

With four states poised to vote on legalizing cannabis in November, there is clear indication that the American people are continuing to change their views about its consumption for a variety of purposes. If state residents vote in favor of marijuana reform next month, there will be 11 legal recreational marijuana states and 32 legal medical marijuana states.

So, get out and vote. Make your wishes known regarding marijuana use in your state—particularly if you live in Michigan, North Dakota, Utah, or Missouri!