Our Biscotti strain review covers one of the West Coast’s most flavorful cannabis strains. From the famed group of cannabis breeders known as Cookies Fam, comes Biscotti, a hybrid strain with an intense potency and flavor. If you can get your hands on this rare indica hybrid, we suggest you tread carefully. Biscotti’s small nugs pack a more potent punch than you’d expect.

What Strain is Biscotti? 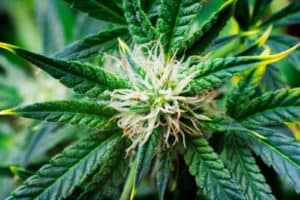 Biscotti strain is an indica-dominant hybrid cannabis strain with roots in the Bay Area. Its sweet and spicy aroma and flavor remind users of a sugary and decadent dessert with a kick. Its robust THC potency can leave usersfully relaxed any time of day.

Is Biscotti Strain indica or sativa?

Biscotti stain is an indica-dominant hybrid.

This strain’s high THC and terpene content make it an ideal strain for terpene-rich extracts.

Biscotti strain delivers a wave of cerebral effects that instantly get rid of stress. Users feel happy and blissful after a few puffs. Its balanced effects also physically relax the body.

Users can sink into their couch and wind down after work. In addition, Biscotti strain can make users feel more talkative and giggly.

Based in the Bay Area, Cookies Fam is known across the world as fine purveyors of lip-smacking cannabis strains. Their lineup includes the legendary Girl Scout Cookies, Sunset Sherbet, and Cherry Pie strains. Biscotti brings together the powerful traits of Gelato #25 and South Florida OG strains.

There are many Biscotti Strain types.

Biscotti genetics can be found in the following strains:

Gummy Buns by Exotic Genetix is an indica strain with an aroma of diesel and berries. Users feel extreme relaxation without feeling too sedated.

Gelly Biscuit from Solfire Genetics has a striking dark purple appearance with a heavy coating of trichomes. Growers report a strain that does not stretch a lot and has an incredible leaf to flower ratio.

White Gold from Archive Seed Bank is one of the most pungent strains around. It has a sweet, vanilla aroma that keeps users coming back for more.

Gelatti from Cookie Fam Genetics is a favorite in California. This strain has a gassy OG and intense menthol aroma. Its balanced effects leave users feeling happy, relaxed, and euphoric.

Biscotti Dough from Cannarado Genetics provides users with strong sedative effects on the body and a heady buzz.

The Belmont is from Envy Genetics.

Biscotti Cake from Elev8 Seeds is a sativa-dominant strain that produces a fast-growing plant with small, purple, and resinous buds. Gassy and cookie flavors make this a treat to smoke or vape. It produces a robust relaxing effect.

Biscotti Mintz from Barney’s Farm is an indica-dominant strain that has a pleasant aroma of mint, spice, and chocolate. Its main terpenes include limonene, caryophyllene, and eucalyptol. Experience a relaxing effect with a rush of euphoria and creativity.

The Spice: Biscotti x The Whip

The Spice from Twenty 20 Genetics is perfect for lovers of gassy strains. Its aroma has been described as a complex blend of cloves, anise, nutmeg, and cinnamon. The Spice is a hardy strain that has a slightly higher yield than its Biscotti parent.

Scotty 2 Hotty from Exotic Genetix is an indica-dominant strain with an intense diesel aroma.

Popscotti from Exotic Genetix is an indica-dominant strain.

Girl Crush from Twenty 20 Genetics has an alluring purple hue and a potent diesel and licorice aroma. Expect very high THC levels from this strain.

Bosscotti from Solfire Gardens has vibrant and dark flower buds with a robust aroma of sugar cookies and gas.

CandyCrush is from Envy Genetics.

Lemonatti from Connected Cannabis has a bright citrus and diesel aroma with floral and hashy undertones. This strain can make users feel focused and energized. In high doses, however, it can produce stupefying effects.

Jellie Cake has a sweet and creamy taste with subtle floral undertones.

Biscotti Peach from Cali Weed is an indica-dominant strain with sweet and fuel-like flavors and high levels of THC. Its effects can be very sedative. They can be good for patients with depression or anxiety.

OBJ from Cannarado has a pleasant flavor of citrus, cookies, and fruit. Its main terpenes include limonene, farnasene, caryophyllene, myrcene, and pinene. OBJ is an excellent daytime strain that can help stimulate creativity.

The Biscotti Mintz strain is a deep purple plant.  Biscotti mints strain leaves turn into a beautiful variety of many vibrant colors.

For a delicious biscotti recipe check out AllRecipes. Just switch out butter or oil for cannabis butter or cannabis oil if you want potent edibles.

Biscotti Strain is reviewed at Allbud. Allbud has biscotti strain as 80% indica and 20% sativa.

Biscotti Cake is a sativa-dominant hybrid.

Named after the traditional Italian pastries, Biscotti strain has similarmouthwatering flavors. With every puff, get a taste of its sweet almond and vanilla flavor. Its sweet dough and cream taste blend perfectly with its earthy and kushy undertones.

Beneath its sugary flavors, you’ll notice a slightly bitter undertone that reminds users of coffee and chocolate.

Biscotti’s dessert-like aroma features buttery, fruity, and gassy notes. A scent of freshly baked sweet bread spreads throughout after opening a jar or breaking apart its pungent buds. A gassy, spicy, and earthy smellsubtly lingers around you and on your taste buds.

Biscotti’s most common terpenes include the following:

Caryophyllene’s spicy and earthy aroma pairs well with any sweet and fruity strain smell. In addition to offering an invigorating smell, caryophyllene is thought to help fight pain and inflammation.

Myrcene’s earthy and musky aroma provides a balance to this sweet-smelling strain. Myrcene is believed to help relieve inflammation and pain.

Limonene’s bright citrus smell provides a sharp and complementary contrast to Biscotti’s subtler earthy notes. Limonene is thought to be able to reduce stress and anxiety.

Don’t be fooled by Biscotti’s tiny appearance. It packs quite the punch for its size. THC levels can range from moderate to high depending on the batch. A small dose should be enough to provide instantly relaxing and blissful effects.

Biscotti is the perfect daytime or nighttime strain. Its versatility allows you to have an effective strain on hand at all times. It gives you a strong cerebral buzz that’ll leave you relaxed and stress-free. Biscotti can be enjoyed in moderation, while high doses can have a slightly sedative effect.

Gelato can provide relief for the following:

Biscotti’s potent and balanced effects make it a good strain to use to relieve a variety of symptoms. Patients use Biscotti strain to treat pain, stress, anxiety, and depression.

Its robust THC levels can help relax muscles an

d ease tension. In high doses, Biscotti can be sedating and leave you couch locked. For patients with mild to moderate pain and inflammation, this strain can provide physical relief.

Biscotti weed strain also produces blissful and invigorating effects that can help improve mood and relieve stress. Even just a small dose of this strain can slow down a racing mind and help users feel more relaxed. This strain can be helpful for those with depression and other mental health disorders.

As a cannabis strain with a complex aroma and flavor, Biscotti weed strain is popular in whole flower products including dried herb and joints.

Biscotti’s potency, flavor, and aroma make it favorit in the cannabis concentrate market. Biscotti is found in a variety of high-terpene extracts.

As a relatively balanced cannabis hybrid, Biscotti does not commonly produce any negative reactions commonly found in high-THC cannabis strains.

For some new or low-tolerance users, Biscotti may produce mild adverse reactions including dry mouth, dry eyes, anxiety, and dizziness.

When consuming THC-rich strains, we recommend starting with the smallest dose possible before gradually building up to a higher dose for desired effects. 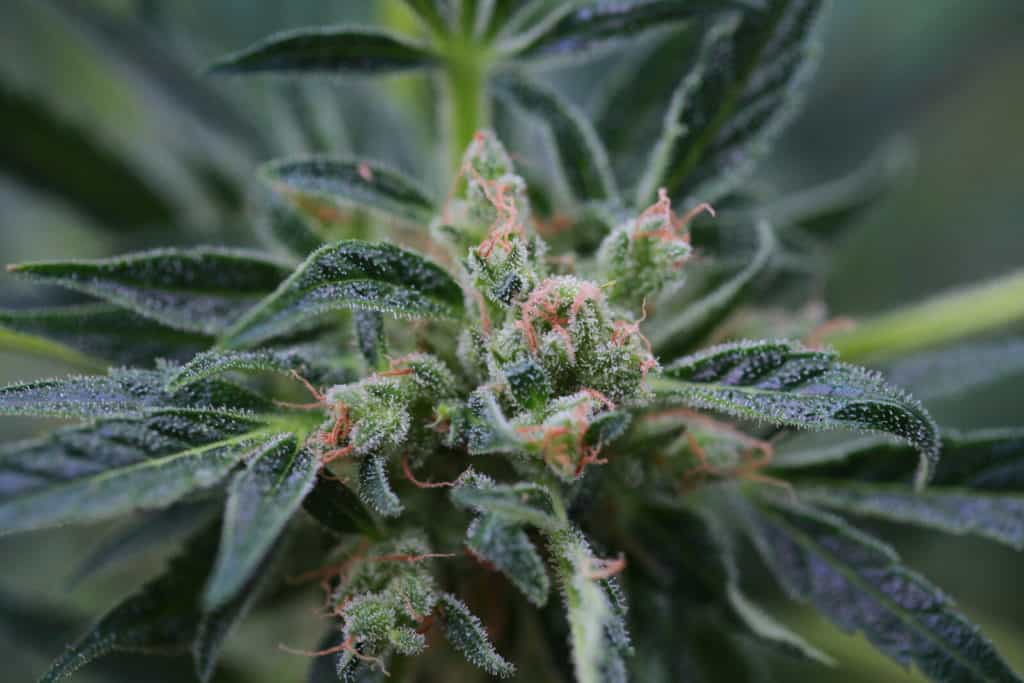 On top of its incredible aroma, flavor, and balanced effects, Biscotti’s got the looks, too. While you may dismiss its tiny popcorn buds at first glance, upon closer inspection, they are full of translucent trichomes surrounding every crevice of the buds.

Dark green and vivid purple leaves mix with vibrant orange pistils. Its mid-size nugs are dense and sticky to the touch.

How to Grow Biscotti Strain

Biscotti can be grown indoors or outdoors. This strain is available as clones or feminized and regular seeds. As a relatively new strain on the market, Biscotti can be hard to grow for beginners.

Its indica-dominant traits produce a short and bushy plant that requires minimal plant training to keep your yields high and plant healthy.

Biscotti responds well to low-stress training (LST), such as lightly pruning the top to give lower branches more light. Many growers have found that this strain responds well to the Screen of Green (SCROG) growing technique.

The SCROG method involves bending and tying down the top branches to create an even canopy for better light distribution.

Are you ready to grow weed at home? Do you want to learn more about different types of cannabis strains? Are you confused about the difference between indica, sativa, and hybrid strains?

CTU’s online cannabis college teaches you the essentials of starting your first weed garden. Whether you’re growing in a closet or a windowsill, our curriculum has got you covered.

Our extensive growing techniques prepare you for a bountiful harvest and a career in the industry. Sign up today at the premier online marijuana school!