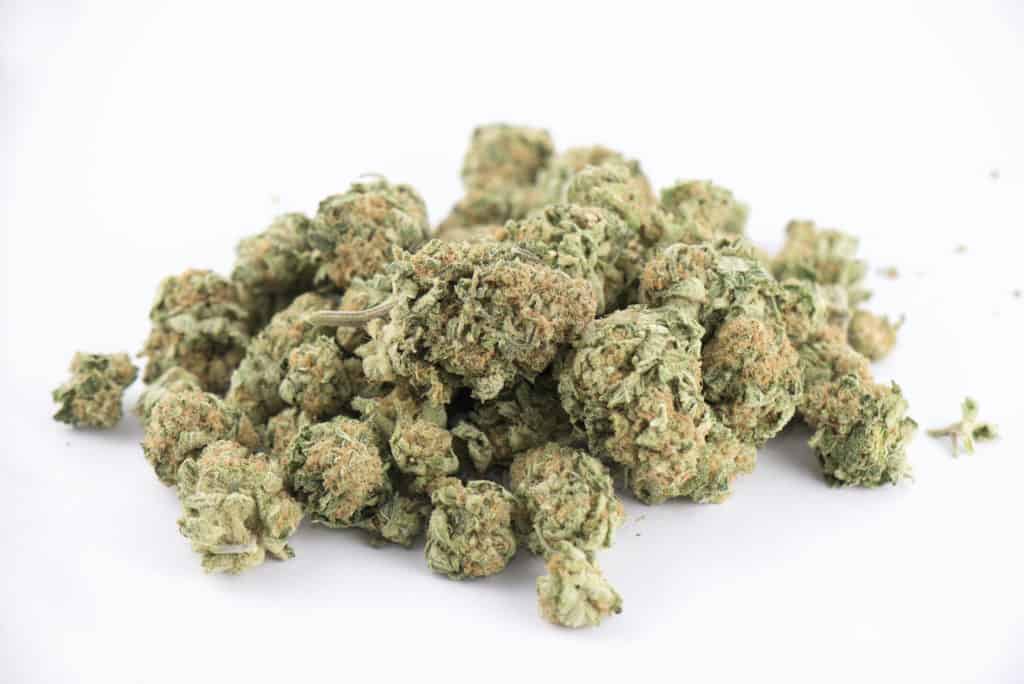 This Gushers strain review will examine a cannabis strain that the Cookies Fam put together that has spread across the nation. This bud strain is also known as Fruit Gushers and White Gushers, so if you see these labels in the dispensary or seed bank you can be assured that they feature the same genetics. Let’s see what Gushers offers to recreational and medicinal marijuana consumers alike!

Cookie Fam combined Gelato #41 and Triangle Kush to create this fruity cannabis strain. It’s an evenly balanced hybrid that slightly leans towards indica with a 60/40 ratio. Gushers typically gets lumped into the same category with Zkittlez and Runtz as new-age fruity strains with epic levels of potency.

Created by the Cookies Fam themselves, Gelato #41 strain is one of the most prominent phenotypes of the Gelato marijuana strain. Colorful buds feature a sweet and earthy essence that delivers ultra-high levels of THC best served to cannabis connoisseurs with a healthy tolerance to THC. It has been used to create another classic in Dolato, also known as Do-Si-Lato, when crossed with Do-Si-Dos.

Triangle Kush represents the three cities in Florida that dominate the marijuana industry: Jacksonville, Tampa, and Miami. This indica-dominant weed strain delivers a boost in creativity with a healthy dose of relaxation. It has spawned other child strains like Triangle Mints, Sin City Juice, and Golden Triangle.

White Gushers is available through seed banks as feminized and regular seeds and nurseries that market marijuana clones. Since its creation by Cookie Fam, many other breeders have put their spin on Fruit Gushers, meaning it’s widely available to grow but each breeding group may produce different phenotypes with varying traits.

With Gushers becoming popular nationwide, it’s only normal for it to become a popular parent strain to try to ride the wave of fame. Some notable child strains include Tongue Spalsher and Wet Betty.

Wet Betty strain is a cross of Gushers and Grease Monkey. Exotic Genetix is yet again responsible for this Gushers derivative. It’s said to maintain a balance of sweet fruit and earthy diesel and delivers a euphoric experience.

White Gushers can do well indoors and outdoors and produces a 3-4 feet tall plant indoors while outdoor plants can reach 6 feet tall. It does best with pruning and low-stress training to maximize airflow and light exposure to optimize yields and reduce pest and disease pressure.

The flowering period for White Gushers will last around 10-11 weeks to optimal levels of maturity for the cannabinoid and terpene profiles. Outdoor growers can expect to harvest in late October due to the long flowering time.

The elongated buds are typically olive green but the dense coat of milky white trichomes almost hides the green and makes the buds appear a shimmering white. There are lots of thin orange hairs throughout the buds as well, but they do little to mask the shiny trichomes.

THC levels range between 15-25%, meaning everyone from beginners to daily consumers can find a batch of Fruit Gushers that works well with their tolerance. The high is best suited for evenings when you need a mood boost and a night of relaxation.

The experience delivers a euphoric body high that is uplifting. It won’t boost energy or motivation levels. Instead, it helps you melt into the night and leave the stress of the day behind. The relaxation isn’t combined with sedation, however, so you won’t be falling asleep right away.

The aroma and flavor of Gushers are what made this strain so popular. It also made it a great choice when making extracts that concentrate the amazing essence of this ganja strain. The aroma features a little bit of herbal earthiness but is dominated by tropical fruits and sour grapes. The flavor refines this into sweet and sour tropical fruits, grapes, and berries with subtle hints of creamy richness throughout.

Fruit Gushers is rich in Limonene, Caryophyllene, and Humulene.

Limonene brings a fruity essence when present in marijuana strains and is great for a mood boost and stress relief.

Caryophyllene brings a sense of spice when present and also delivers stress relief while fighting the effects of inflammation.

If you like what Gushers has to offer, you can try other strains that offer the same terpenes and effects, like Garanimals, Jet Fuel Gelato, and The Sauce.

Yes, Gushers is ultra-popular in the recreational marijuana market. However, it has plenty enough to offer to medicinal marijuana patients to hold its own against the best medical cannabis strains. Here are a few of the conditions that can be mitigated by Gushers:

The only thing it is missing for a complete marijuana-based holistic medicine is CBD. Combine Gushers with a CBD extract and you have the best of what medical marijuana has to offer!

Final Words On The Gushers Strain

Gushers is a wonderful strain with plenty to offer for recreational and medicinal users. Beginners and advanced cannabis consumers will be happy with this bud strain.

If you want to try your hand at growing this strain to ensure an unlimited supply of Gushers for yourself, check out our training course on growing medicinal marijuana. Increase yields and potency by utilizing our course here at CTU!