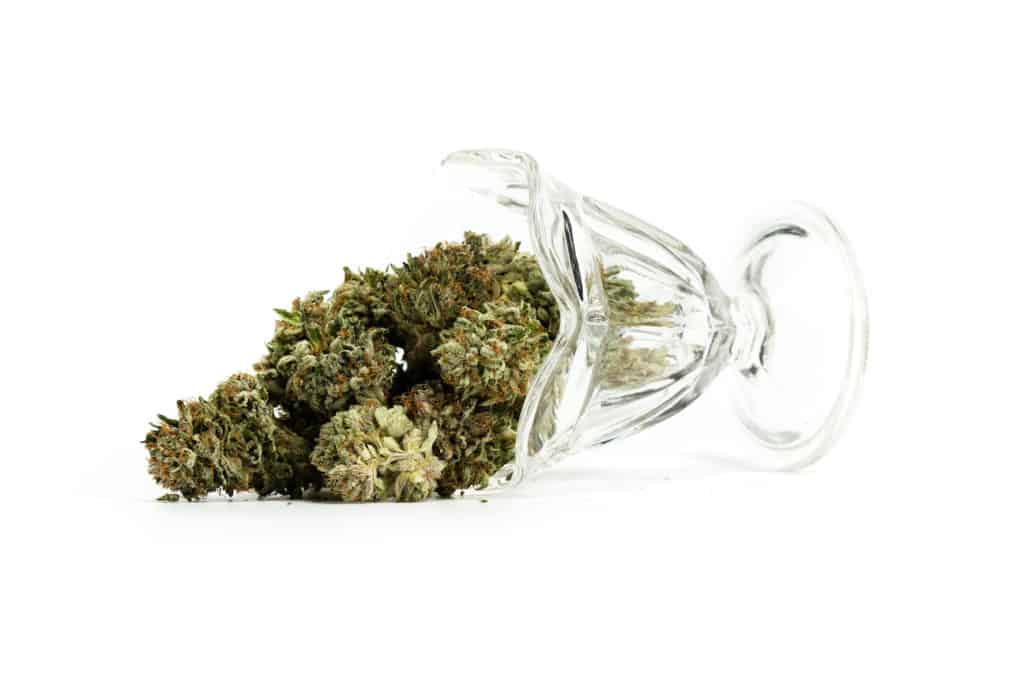 After reading this Ice Cream Cake strain review, you’ll be ready to try some of this decadent bud! With relished genetics like Ice Cream Cake possesses, it’s no surprise that this bud strain from Seed Junky Genetics can be found on most dispensary shelves and breeders and nurseries around the nation are working to replicate this sought-after marijuana strain.

While this certainly clouds up the data collected on the internet about this bud strain, we know that Seed Junky used its variety to create Ice Cream Cake without a doubt.

Another hybrid produced with this lineage is LA Kush Cake, which is also an indica-dominant ganja strain. It delivers a creeping high which matches the effects of Ice Cream Cake.

Sunset Sherbert and Thin Mint GSC come together to create the Gelato weed strain. Gelato #33 is the most popular phenotype of Gelato, and can quite often be labeled without the phenotype number. The sweet and fruity citrus essence is complemented with an uplifting and energetic high.

Gelato #33 has been used to create plenty of child strains, with many coming from Elev8 Seeds. Some of their child strains include Gelatmo, Forbidden Gelato, and Gelato Sundae.

They also have a cross of Gelato #33 and Wedding Cake called Gelato Cake, which uses the Cherry Pie and GSC lineage instead of Seed Junky’s Wedding Cake.

If you are looking specifically for genetics straight from Seed Junky themselves, you might be out of luck. They don’t sell their genetics very often.

However, there are other breeders and nurseries out there that have feminized seeds and/or clones available for Ice Cream Cake. The hard part is verifying their lineage is what you desire.

Confused yet? Yeah, that’s why finding seeds and clones with the genetics you really want can be hard sometimes…

Ice Cream Cake has been used by other breeding groups to create new child strains, like Banana Cream Cake and Mint Cream Cake. Both of these hybrids are from Alchemy Genetics. Other breeders have used Ice Cream Cake successfully as well.

Ice Cream Cake can be grown indoors and outdoors and produces heavy yields. Outdoor growers should start growing at the beginning of June to avoid the plants budding far too early, due to a lack of sufficient sunlight hours.

While this plant can be a bit difficult for beginners to grow to its full potential, yields can exceed 500 grams per plant, with outdoor plants producing more than their indoor counterparts.

The buds will appear very dense and feature forest green with hues of purple if the natural color-producing compounds are activated within the plant during the flowering stage.

Thick orange hairs weave amongst the buds as the thick coat of potent white trichomes glitters on the surface.

Ice Cream Cake is a perfect fit for the end of the day when you are getting ready to go to sleep. The average THC levels hover around 20-25%, so this ganja strain isn’t for the faint of heart.

The high initially hits mentally with a boost of happiness and relaxation. Soon, the creeping physical effects set in a turn the experience quickly into couch-lock as you fade away into a deep slumber. Don’t consume Ice Cream Cake if you have a to-do list!

The aroma is quite pungent with a mixture of creamy vanilla and cheese. The sweet aromatic profile transfers to the flavor with a more pronounced essence of sweet sugary dough to go along with the creamy cheese flavor.

Limonene delivers a sweet and/or fruity essence when present and dominates strains like Wedding Cake and Strawnana.

Caryophyllene delivers a spicy punch and is rich in GSC and GG4.

Linalool is rarely the most dominant in a cannabis strain, but it is found in strains like Zkittlez and Kosher Kush.

Ice Cream Cake is heralded as a wonderful choice for medicinal marijuana. It is used to treat:

Ice Cream Cake is a derivative of the GSC family, which has taken the entire cannabis industry by storm. Ice Cream Cake is one of the many dessert-flavored strains that crowd the market as well. While there is plenty of competition, this bud strain takes a place at the podium for most cannabis consumers.

If you want to grow your own and be able to produce dispensary-quality bud, check out the growing education course here at Cannabis Training University that is designed to help you grow the best medical marijuana possible you’ve ever cultivated!