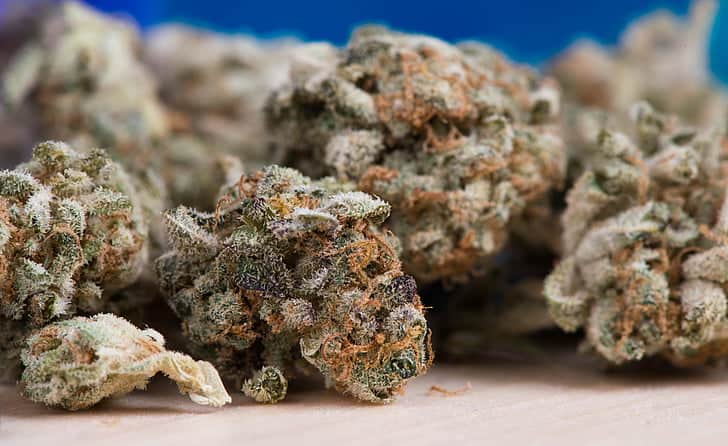 Here is an updated Lava Cake strain review for 2021!

Lava Cake is one of the most delicious marijuana strains with cake genetics. All cake strains are appealing because of their delicious taste.

Lava cake has an even better and more refined “cakey” aroma and taste earning it a coveted spot among the sweetest tasting marijuana strains. In the last couple of months, this strain has gained a lot of traction as demand for flavorful strains is on the rise.

You might be wondering, why the name Lava Cake?

While the “cake” represents the sweet taste of this strain, the lava is symbolic for the ooey gooey cannabinoid content in the resinous glands of this strain. Lava Cake is richly coated with trichomes that give it a glassy appearance when the nugs are fully mature.

Lava Cake is a super creation from the famous marijuana breeders Cannarado Genetics. They created this strain by crossing Thin Mint GSC with Grape Pie. The result is an indica dominant hybrid strain with 70% indica and 30% sativa genetics.

The indica effects can be felt all through this strain as it causes intense feelings of deep relaxation. It’s also a THC potency strain with 15%-18% THC.

Lava Cake has a light and pleasant scent that is reminiscent of rich and moist vanilla flavored cake. The cakey taste is decked with hints of pine and nuts.

Inhaling the first whiff is likely to get your mouth wet with saliva. When you exhale your mouth will be left with a taste of mint which is an inherited characteristic from Thin Mint GSC.

Lava Cake is one of the most beautiful marijuana strains that you will ever encounter. It has the highly coveted anthocyanin which gives weed varieties a royal purple hue. There is a mix of olive greens, purples, and burnt orange pistils going on in this strain.

The icing on the cake (pun intended) is the silvery layer that gives this strain an immaculate finish. Like most indicas, the nugs are large and low-lying. Lava Cake gives high yields.

Lava Cake is a strain for positivity and relaxation. Being a potent indica it causes a gentle couch-lock effect when consumed in moderate doses.

This starts from the upper limbs and higher torso and spreads towards the toes in waves. Your limbs will begin to feel totally stretched out and this is going to transcend to heaviness with time.

Eventually you might not be able to move your limbs or body and all you will have energy for is a nap. Do not hesitate from taking this refreshing nap.

Lava Cake has sufficient amounts of THC to cause an energized euphoria. This feels like increasing pressure in the higher levels that forces out disturbing thoughts and leaves the user without a care in the world.

If you are going through a rough patch that is taking a toll on your mental sanity, Lava Cake might be just what you need to relax your mind.

Lava Cake is also ideal for social settings. It’s a strain that causes giggles and laughter. This helps to set the tone for social events and individuals with social anxiety disorders will benefit greatly from this.

Lava Cake is a deeply relaxing strain that is great for evenings and weekends when all you want to do is wind down and do nothing. The mental energy will allow you to focus on some creative activities that don’t require a lot of movement.

Next time you are feeling stressed out and want to catch a break consider trying out Lava Cake; it works wonders.

Lava Cake is intended for users suffering from anxiety and depression. It has uplifting effects on the mind and will wipe out negative emotions and leave you in an elevated mood for a while.

Given the THC content, Lava Cake is also ideal for combating pain of a chronic nature. Patients have used this strain to manage migraines and backaches.

Lava Cake induces the munchies. This works well for those with a low appetite. After consuming this strain users have reported an increased desire for food and less nausea.

Patients undergoing chemotherapy usually struggle with poor appetite which is a side effect of the treatment regimen.

A couple of studies have shown that high-THC marijuana strains could help to improve the appetite of such patients as well as reduce nausea and vomiting.

The euphoria that is produced by this strain is effective in relieving anxiety. The same effect also helps in dealing with PTSD and OCD.

The body-high created by this strain will ease chronic fatigue that may have built up in the muscles over the years. Inflammation in the muscles is also likely to dissipate after consuming Lava Cake. This will leave you feeling very relaxed and rejuvenated.

Lava Cake, like many other high THC strains, is likely to cause the cotton-mouth effect. For those who have not used marijuana before this is not something to look forward to.

It feels like chewing on tiny cotton balls and at the same time your mouth is very dry. In some instances it presents with foul-smelling breath as well.

THC inhibits the production of saliva from the salivary glands. This makes your mouth dry.Chewing on ice cubes and breath enhancing mints can be helpful. Additionally, hydrating before and during could also help to minimize the cottonmouth effect.

Lava Cake is generally well-tolerated by most users. However, some new users tend to over-do in this strain. What happens later is that they are not able to handle the extreme gush of euphoria that follows.

This causes panic, anxiety, and paranoia in some cases. This can be avoided by sticking to manageable doses when handling this strain.

How To Grow Lava Cake

Lava Cake seeds are not easy to come by as this is a rare strain. But if you are lucky to come across some this is a strain worthy experimenting with.

It is a simple indica to grow and follows a similar pattern as most indicas do. The nugs are wide and dense giving the canopy a bushy appearance. They grow to a height of five to seven feet, depending on exposure to light.

Lava Cake can do well both in an indoor and outdoor setting. Grown indoors the plants mature in about 9 weeks and give a yield of 10 to 16 ounces per square meter.

Outdoors Lava Cake does well in the Northern Hemisphere, the harvest should be ready in early October. Expect to harvest 14-18 ounces per plant.

Lava Cake has a sweet and chocolatey taste to it, with a hint of mint and an aroma that is a bit earthy. It packs a slight punch with a THC of 15%-18%. Lava Cake helps lift your mood and users experience levels of joy and happiness.