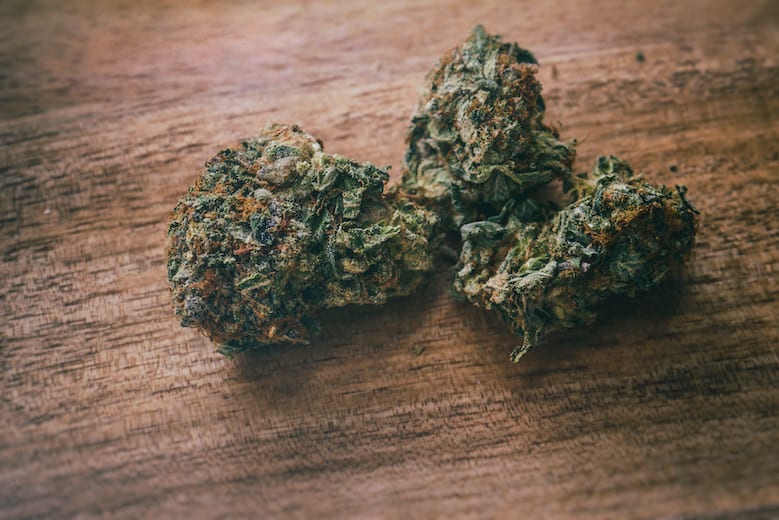 In this MK Ultra strain review, we’ll be reviewing a potent indica cannabis strain bred by the breeders T.H. Seeds. Being named after a top-secret CIA program is a lot to live up to. Does the award-winning MK Ultra OG stand up to the best of the best weed strains?

OG Kush is one of the most widespread cannabis strains to date and its unique mixture of skunky fuel and spice is held as one of the standards of weed strain essences.

It has gone on to spawn hundreds of child-strains, including Girl Scout Cookies, Headband, and Bubba Kush. It also has many notable phenotypes that are popular themselves, including SFV OG, Ghost OG, Tahoe OG, and more.

G13 takes on more government conspiracy as the legend of this strain is that the nation’s top agencies (CIA, FBI, etc) gathered the best strains in the 1960s and bred them to create what we would now call “dankensteins”.

G13 was allegedly one of these strains and a single technician was able to get a cutting from one G13 plant and spread it to the world. Is that the truth? Probably not, but it’s interesting nonetheless.

We don’t know the parent strains, however. It has gone on to create many child-strains of its own, including Tangerine Dream and G13 Haze.

MK Ultra OG is available in feminized seed form from T.H. Seeds, the original breeders of the pot strain. It is also available through many other online seed banks. While it may not be quite as intense as the LSD experiments it was named after, this indica surely has much to offer growers.

Breeders have also used MK Ultra to create more child-strains. Cannatonic and Cold Creek Kush are two that stand out.

Cannatonic is one of the most popular weed strains for a balanced THC and CBD experience. It is quite possibly the most popular CBD strain in today’s market and it will still deliver a mellow high for those who prefer a mixture of CBD and THC. It is a cross of MK Ultra and G13 Haze, using the G13 lineage deeply.

T.H. Seeds put together Cold Creek Kush as well, crossing MK Ultra and Chemdawg 91. It’s another indica-dominant hybrid that has a sour pine essence that took home 2nd place in the 2010 Cannabis Cup.

This marijuana strain is almost exclusively grown indoors due to its small stature and affinity for a controlled environment. Outdoor grows can be used, but this cannabis strain is far from frost-tolerant and prefers warm and sunny climates. These plants can reach 4 feet tall, although they tend to fall shorter than that most of the time.

8-9 weeks during the flowering stage will produce mature MK Ultra buds. This means that outdoor growers will be harvesting come late September/early October.

As are most indicas, the buds are quite dense. They take on an olive-green color and feature red-orange and brown hairs that swirl among the buds. The trichome coverage is magnificent. The buds are sticky and drenched in resin, pleasing even the most stubborn cannabis connoisseurs.

While THC levels between 15-22% don’t seem as enticing as some of the new-age strains that can reach 30% THC sometimes, the high experienced with MK Ultra OG is no joke. It’s a relaxing indica that is best served in the evening.

The hypnotic cerebral effects of MK Ultra are probably what spawned the idea for the name behind this strain. Within a few minutes, the psychedelic cerebral effects kick in and can induce paranoia and anxiety in those with a low tolerance to THC.

If you make it through without paranoia, the high will be a combination of fast-acting and hard-hitting, leaving you relaxed and carefree for long periods. Beginners should tread lightly with MK Ultra.

The aroma accompanying MK Ultra is quite odd and seems to be a mixture of pungent chemicals, sweet lemons, and fuel. The flavor is a bit more common being a blend of sweet pine and earthy skunk.

Myrcene, Caryophyllene, and Limonene are the dominant terpenes found in this ganja strain.

Myrcene acts as a calming antioxidant and may treat insomnia, pain, and inflammation. It’s found strains like Blue Dream and OG Kush.

Caryophyllene can fight inflammation, pain, anxiety, and depression and its spicy essence dominates strains like GSC and Original Glue.

Limonene is known to treat the same conditions as Caryophyllene, making them a potent medicinal combo. It dominates strains like Wedding Cake and Do-Si-Dos.

Those looking for similar strains that match the terpene and effect profile will be pleased with Mandarin Cookies, Pink Kush, Sundae Driver, and Alien OG.

MK Ultra may be popular with recreational users, but it does seem to have the propensity to be a good medicinal strain. It can treat many strains, like:

If you tend towards paranoia, this strain can be more harmful than medicinal, as the cerebral effects discussed in this review are quite potent and apparent. There are other strains that you can use for similar medical purposes if this describes you.

MK Ultra OG won awards back in the early 2000s but it’s still worth its weight and can measure up to the most popular strains on today’s cannabis market.

If you want to try it out, find it at a local dispensary or pick up some feminized seeds online and grow a batch for yourself. We can help you out with our growers education course designed to help medical marijuana patients grow the best pot possible on their own!