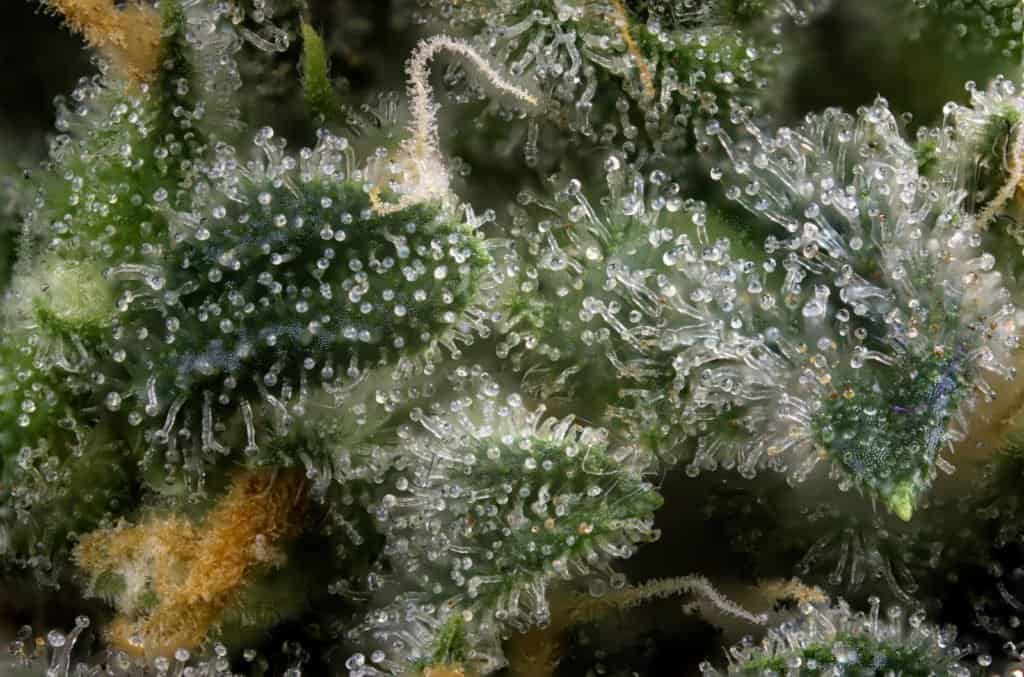 The flavors and aromas of various cannabis strains are due to the wide range and ratios of terpenes contained within them. These cannabis compounds not only make some strains taste fruity and sweet and others skunky and earthy, but they work in combination with cannabinoids to provide and boost the effects as well. This complex and synergistic relationship is a phenomenon known as “the entourage effect,” and is the subject of ongoing research.

Terpenes are not unique to cannabis, although cannabis certainly maximizes the essence of many of them. Other plants contain terpenes as well. Many plants and fruit have robust terpene levels. It’s terpenes that make fresh-cut mangos and papayas smell so delicious, as well as the distinctive aroma of herbs like rosemary and basil. Terpenes are found throughout nature. Interestingly, in addition to their presence in various plants, they are also found in some insects.

The terpene pinene ranks as one of the most common terpenes found in marijuana flower. As its name suggests, pinene has a notable pine aroma. Like other terpenes, pinene is secreted in the trichomes of cannabis buds along with other terpenes and cannabinoids like tetrahydrocannabinol (THC) and cannabidiol (CBD). Pinene is also found in various conifer trees, orange peel, dill, rosemary, sage, and parsley.

Like research relating to other terpenes, research relating to pinene is ongoing, but there are indications that pinene may provide a host of benefits for those who consume it. Among its potential medical applications are the treatment of anxiety, asthma, and pain, and it may even be useful in the treatment of cancer. The effects of pinene when smoked or vaped include alertness and improved short- and long-term memory. Pinene is able to cross the blood/brain barrier and once in the brain is thought to affect neurotransmitters in a way that boosts memory. Although a partial understanding of how pinene specifically impacts memory has been relatively recent, the ability of pinene to provide mental clarity and improved memory has been recognized by various cultures for thousands of years.

Also, like CBD, pinene is thought to counteract the effects of THC. Research also indicates that it may be effective as a bronchodilator and in the treatment of inflammation. Pinene is an antioxidant and has antibacterial properties as well.

A wide range of cannabis strains contain this terpene. Although pinene’s effects suggest it may be more prevalent in sativa strains, this terpene is prominent in the terpene profiles of some powerful indica strains as well as sativa.

Regardless of whether strains containing pinene lean to the sativa or indica side of their genetic backgrounds, they tend to be strains that result in a significant level of mental clarity, regardless of whether or not they have relaxing qualities. Some strains that contain pinene also contain myrcene—another terpene—which deliver deeply relaxing effects. Bubba Kush, an extremely popular strain, is a perfect example of this. Regardless of Bubba Kush’s deeply relaxing qualities and uses in fighting insomnia, it also allows a certain level of mental clarity, largely thanks to its pinene content.

A large number of extremely popular cannabis strains are known for their notable pinene content. Unlike the Bubba Kush strain just mentioned, some of these strains deliver strong sativa effects. The following strains contain high levels of pinene in their compound profiles. Their range of effects and unique aromas and flavors define their terpene combinations and make them notable. Indeed, all of these strains are standards in the industry and most of them have been found in the jars of consumers for decades.

Pinene is a beneficial terpene found in a range of cannabis strains, including a number of industry classics. Known as an effective treatment for anxiety, asthma, and pain, many strains containing pinene are popular for medical use as well as recreational party accoutrements. The various terpenes found in cannabis are part of what makes them interesting and appealing, and pinene ranks as one of the most prevalent and important.