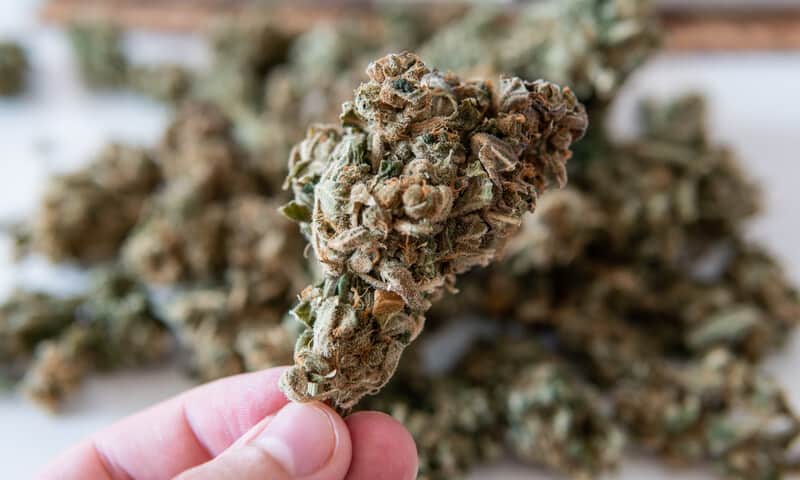 The Triangle Mints strain AKA Octagon Kush will give you so high you might feel like you were in the octagon with an MMA fight you’ll be so high. For those that do not know, this strain is so strong that even veteran smokers might want to toke a bit carefully.

Is Triangle mints strain indica or sativa? Triangle Mints weed strain is a 70/30 Sativa-dominant hybrid of Animal Mints and Triangle Kush. This can be a great wake and bake strain as it will bring about an energized focus. The high will hit quickly and while you have energy your entire body will be relaxed.

Triangle Kush is a strain that was bred in Florida and thrives under warm humid conditions. THC levels hover around 20 percent for this Indica-dominant hybrid. This strain is a great investment as you will truly relax and the high seems to last forever.

Animal Mints is going to get you incredibly high with a THC content of up to 32 percent. This Sativa-domiinant hybrid will give the consumer energy while allowing their body to relax. Expect a menthol flavor that is so appealing to a number of cannabis enthusiasts.

Finding strains that have similar effects can allow you to increase or decrease the potency. You cannot always smoke potent strains especially if you have important things to do. Strains that have a similar high to Triangle Mints are Amnesia and Bullrider.

Triangle Mints can be grown indoors or outdoors. The yield is not very high but this strain more than makes up for this with its potency. Beginners can have an easy time growing this strain as this could be its most attractive feature besides the potency.

Yield is not going to be massive with Triangle Mints but this can be a great addition to your medicine cabinet. Make sure that you invest in quality seeds as well as soil and nutrients. Strains differ in ease of growth with this being one of the easiest besides autoflowering strains.

The flowering period of Triangle Mints lasts 8 to 10 weeks. Outdoor grows should be ready to harvest at some point in October while indoor grows can be harvested at any time of the year.

The THC content of Triangle Mints comes in at a massive 28 percent. Beginners should not even try this strain as it will be overwhelming for even seasoned marijuana consumers. This content is as high as some concentrates like hash which is nothing to scoff at.

There are certain grows of this strain that reach over 30 percent which makes it one of the strongest in all of cannabis. Other heavy-hitters include Gorilla Glue #4 and Chemdawg.

Humulene has an earthy aroma and a spicy taste. Strains that contain this terpene are Mars OG and Jesus OG. Benefits of this terpene include a calm mind and body which is perfect after a long day.

Pinene is present in a number of plants and has the ability to treat pain, anxiety, and stress. Strains that are relatively high in this terpene include Gary Payton and Strawberry OG.

Limonene has the taste of lemons as well as the aroma. This terpene can help with inflammation as well as anxiety and depression. Strains that are high in this terpene include Blue Cheese and Rainbow Chip.

Strains can have almost identical tastes and vastly different effects. Some people swear by a citrus taste or that of berries. Regardless of your taste, you can always find strains that have similar tastes. Animal Mints has a similar flavor to Blood Sativa and Sweet and Sour Diesel.

Cannabis has been used for centuries to address various medical problems. Weed made its way back into the mainstream due to the relief it can provide. Triangle Mints can help with the following medical conditions:

Marijuana can change the life of a person that struggles with various medical conditions. Pharmaceuticals can have a plethora of side effects when taken for years. Weed does not have this as people have smoked weed for decades with no issues besides maybe a smokers cough if they smoke blunts.

Triangle Mints is a strain that can test your might against high levels of THC. Growing this strain will not be much of a test for an experienced grower as it just needs water, soil, and nutrients to thrive. Other strains require far more work than this THC monster.

Growing marijuana is truly a skill that you can learn over the course of time. The tough aspect is that some people only learn with one grow a year which can lead to it taking years to learn important lessons. Researching grow diaries and asking questions online can be a great way to figure out what might be impacting your grow negatively.

Cannabis Training University has the best in marijuana cultivation courses and has helped thousands of people improve the quality of marijuana that they grow. Learning to grow proficiently can lead you to find a job into the cannabis industry which is only expanding annually. Our faculty has won awards in various aspects of the legal weed industry so you are learning from the best of the best.