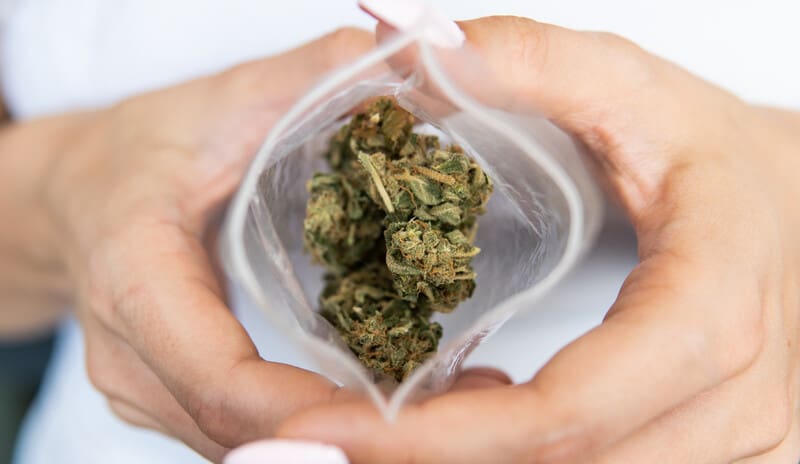 Are there cannabis strains for Restless Leg Syndrome? Restless Leg Syndrome is a neurological condition where patients feel tingling, itching, or crawling sensations in their legs, which leads them to keep shaking them. In addition to feeling extreme discomfort and lack of quality sleep, patients also find it hard to maintain a social life because of the obstruction caused by RLS.

The remedies for this condition include massage, exercise, and medications like pain relievers and muscle relaxants. Patients of RLS have been turning to medical marijuana to treat this condition. Marijuana can help with relaxing leg muscles and numbing sensation in the legs.

Though there is limited research concerning medical marijuana and RLS, users report that they can cope with RLS after consuming certain marijuana strains. These strains may also help with falling asleep, body pain relief, and boosting confidence during social interactions.

What is Restless Leg Syndrome (RLS)?

Restless Leg Syndrome is a neurological condition that results in an uncontrollable urge to keep shaking or jiggling one’s legs. It is also known as Willis-Ekbom disease. The shaking is caused by the feeling that something is crawling on or tickling their skin. This condition flares up at night, and it is particular to the legs, although it may affect hands in some patients.

The most significant sign of restless leg syndrome is the urge to shake your legs. Other symptoms of RLS include:

A dopamine deficiency or genes can cause RLS. RLS may be passed on among family members, but some neurologists believe there is a link between dopamine production and Restless Leg Syndrome. One of the potential reasons why weed has a positive impact on RLS is because it can increase the production of dopamine in the brain.

Can Marijuana Cause You to be Restless?

Can weed make RLS worse? Marijuana side effects vary from one individual to another. A strain that brings one person anxiety relief may cause paranoia in another. Certain strains of weed may cause restlessness. However, other strains are capable of reducing muscle spasms and seizures.

In fact, some users report that taking marijuana for RLS may help more than pharmaceutical medication. Take note that using marijuana in the right doses will not cause adverse effects like restlessness and paranoia.

Can Weed Help with Restlessness?

Restless leg syndrome has some correlation to dopamine deficiency in the brain. Marijuana is capable of increasing the production of dopamine in the brain. This is made possible due to the compound called THC, which is found in marijuana. THC, or tetrahydrocannabinol, is a compound that produces weed’s psychoactive effects like heightened senses.

THC is similar in structure to anandamide, which is a chemical found naturally in the brain. Anandamide is responsible for sending chemical messages between cells in the body. Because of this similarity, THC can interact with the brain’s compounds easily.

For example, THC latches itself to molecules in the brain’s receptors and activates the brain’s reward system, leading to the production of dopamine, which is the pleasure hormone.

In addition to THC, using CBD for restless legs is also effective. CBD, or cannabidiol, is another compound found in marijuana. It does not produce as much intoxication as THC and it has several positive benefits for the body.

CBD interacts with pain receptors in the brain to reduce the amount of pain felt within the body. This makes it ideal for relieving headaches, back pain, and pain caused by injury and trauma.

Users can obtain CBD through smoking or vaping cannabis, but it can also be extracted and isolated in the form of CBD oil. Medical marijuana users are turning to CBD oil for restless leg syndrome, mainly because they want to stay away from the intoxicating effects of cannabis. For this reason, cannabis growers are breeding strains of cannabis that have a higher CBD content and limited psychoactive effects.

Romulan is an Indica marijuana strain that has a high chance of reducing restless leg syndrome. It is a commonly used by medical marijuana patients to reduce pain and control muscle spasms. The high from Romulan delivers sedative and relaxing effects. This strain provides a slight high, which is great for medical marijuana users who do not want to feel the effects of highs like reality distortion and paranoia.

Harlequin is a Sativa based strain that is well known for its significant CBD content. CBD is beneficial for many health problems such as back pain, nausea, and stomach issues, because of its ability to interact with pain receptors in the brain. It is for this reason that the Harlequin strain is the perfect Indica for RLS.

This strain is also helpful in curbing anxiety, depression, and stress. Harlequin is an excellent choice for medical marijuana users because the high does not obstruct everyday activity.

Charlotte’s Web cannabis strain is another cannabis strain that can reduce the symptoms of restless leg syndrome. It has a high CBD and low THC content, which makes it highly sought after by medical marijuana patients.

It works to regulate the body’s movement and reduce shaking and jiggling in your legs. This strain is also useful for lowering seizures and muscle spasms. Some users may not want to smoke or vape cannabis, and the better option may be CBD oils or tinctures for restless legs.

ACDC is a hybrid marijuana strain that is preferred by medical marijuana patients because of its high CBD content. Not only that – this strain has little to no intoxicating effects on the mind. ACDC is used to treat body pain, seizures from epilepsy, and the side effects of chemotherapy.

If you are looking to reduce restless legs, ACDC will provide benefits such as total body relaxation and improved sleep. This strain can be taken during the day because it does not obstruct focus and productivity.

Granddaddy Purple is an Indica marijuana strain that is high in THC content. The THC content helps with insomnia, nausea, loss of appetite, and muscle spasms. This strain is a good choice for restless leg syndrome, as it can bring on complete body relaxation and sleep.

It is quite potent and not suitable for daytime use. It’s best consumed at night time to take the edge off your day. Granddaddy Purple is also efficient in reducing anxiety, stress, and depression.

Holy Ghost is a hybrid strain that is used mainly for its uplifting and mellow effects on the mind. The high comes down with a warmth all over the body. This strain is among the best weed for restless leg syndrome.

It can target symptoms of restless leg syndrome such as tingling, itching, and crawling sensations. The Holy Ghost strain can also help relax the body and promote sleep, which can be a problem for sufferers of this condition.

Jack Herer is a hybrid strain with mostly Sativa qualities. It leads to a blissful and clearheaded cerebral high. After the mind high manifests, users start to feel a body high characterized by a boost in energy. It is the perfect weed strain for daytime use. It can take away anxieties and insecurities.

Users of Jack Herer report that it reduces the symptoms of restless leg syndrome. Taking this strain may cause some hunger.

Stephen Hawking Kush (SHK) is an Indica-dominant strain created to deliver a high CBD content. Due to its high CBD and low THC content, this strain is ideal for reducing pain and relaxing the body while maintaining focus and productivity throughout the day.

SHK promotes a sense of well being and produces waves of relaxation throughout the body. It is also perfect for reducing restless leg syndrome because it regulates body movement.

Cannatonic is another hybrid strain that was created to increase CBD content. This strain helps relieve restless leg syndrome because of its relaxing and numbing properties. It takes the focus away from the sensations caused by RLS, such as tingling, crawling, and itching.

Cannatonic also uplifts and relaxes the mind, making it ideal for anxiety and tension relief. Using this strain can also reduce headaches, back pain, and muscle spasms.

Pennywise is an Indica-dominant strain that contains a significant amount of CBD. This strain takes effect quickly and brings on a gentle cerebral high followed by total body relaxation. Even though this strain has slightly intoxicating properties, users report that they can carry out everyday tasks with focus.

This strain soothes the body, making it useful for restless leg syndrome. It is also suitable for reducing stress, anxiety, and depression.

Restless leg syndrome can result in discomfort, daytime drowsiness, shaking legs, and even a lacking social life. Marijuana can help with these symptoms. If you prefer to keep away from the intoxicating properties of marijuana, you can choose strains with a high CBD/low THC content.

Whether you choose CBD or THC for restless leg syndrome, marijuana can provide muscle relaxation properties that will help you to go about your day without any twitching or itching caused by RLS.