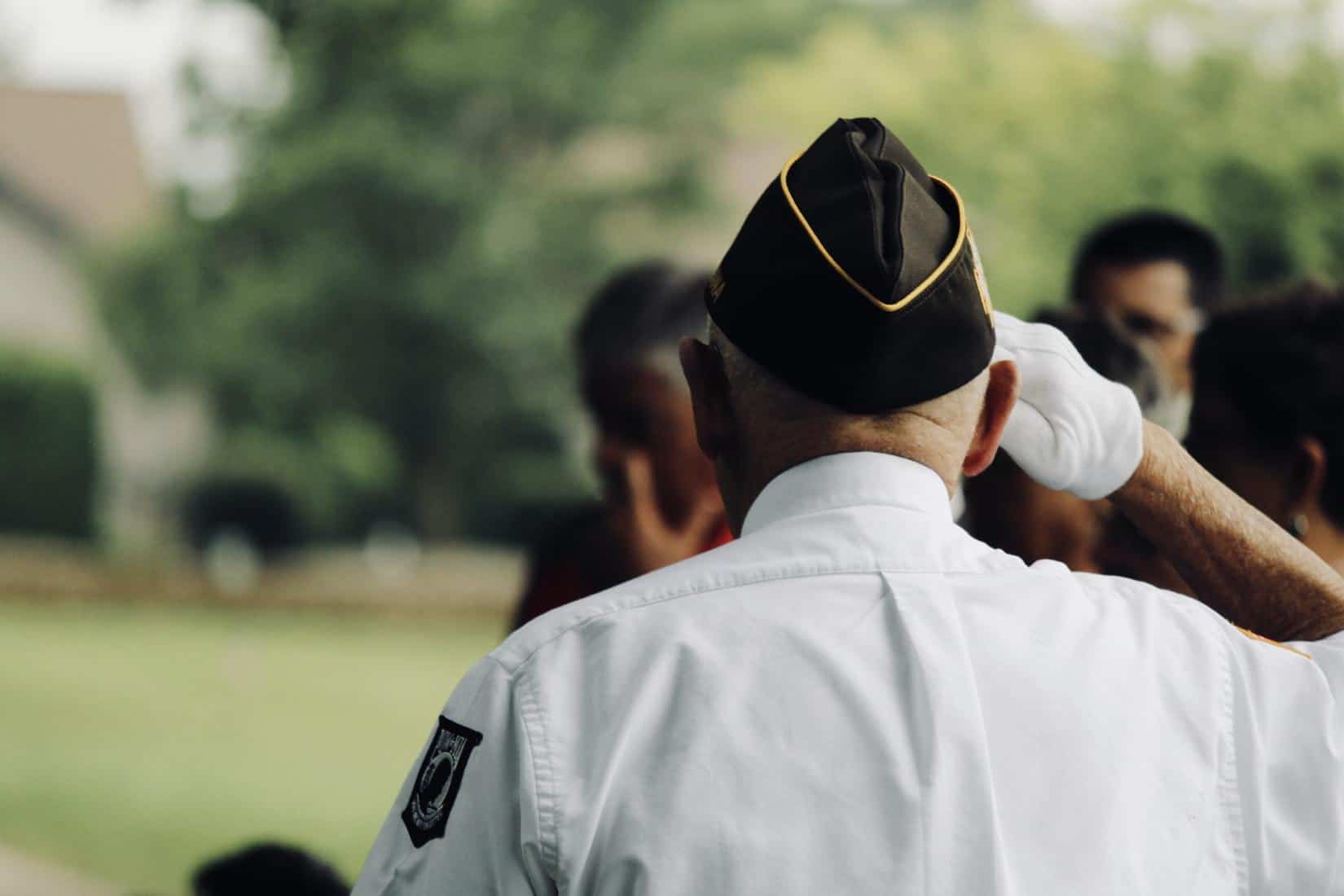 How Veterans Can Use Medical Marijuana For PTSD

Our cannabis consumption guide teaches you how veterans can use medical marijuana for PTSD. Veterans are one of the fastest-growing segments of medical marijuana consumers in the country. And for good reason. Cannabis has the power to treat many of the symptoms of medical conditions common among veterans.

Post-traumatic stress disorder (PTSD) is one of the most common conditions affecting military veterans today. Medical marijuana has shown promise as an alternative treatment for PTSD. Cannabis has been shown to significantly improve a patient's quality of life.

After experiencing harrowing events on the battlefield, soldiers can come back home feeling on edge, sad, and unable to function the same before the traumatic event happened. PTSD is a mental health condition that is triggered by a range of sights, sounds, smells, or thoughts.  These triggering events can elicit flashbacks, nightmares, and anxiety attacks.

While most veterans can recover from such experiences within weeks or months, others aren't so lucky. Far too many soldiers come back feeling broken and dejected. Unable to cope with the demands of everyday life, they may self medicate drugs and alcohol to relieve the daily burden of these intrusive thoughts. PTSD has the capacity to completely disrupt a person's ability to function from day-to-day.

How Common Is PTSD In Veterans?

Today's service members must engage in a whole new conflict compared to the World War era or even Korea, Vietnam, and the Gulf War. Modern conflicts don't have a definitive “winner” and fewer people participate in active combat leaving soldiers with a bitter and traumatic experience.

When service members with PTSD return home from combat, they aren't able to relate to civilians. They have a hard time speaking about their experiences. As a result, they can't open up and trust others with their feelings. This causes a vicious cycle of hopelessness. They can become closed-off, easy-to-anger, and hyper-vigilant.

PTSD affects everyone differently. There are a variety of short- and long-term treatments for PTSD. Here are just a few of the most common treatments.

Talk therapy is helpful for PTSD patients who have a hard time talking about their trauma. A professional therapist can help guide them through the traumatizing process of reliving experiences. They also teach people skills to deal with these emotions and help improve their overall self-esteem.

CPT is usually a 12-week course with sessions lasting between 60 and 90 minutes.  CPT, in particular, focuses on thoughts related to the traumatic event. Patients are asked to write out a detailed account of the event. Going deep into emotions and feelings can help patients and therapists focus on granular issues instead of covering the entire condition broadly.

PET sessions are about 90 minutes each, and treatment usually involves 8 to 15 sessions. During the sessions, therapists will teach patients skills to manage the emotions that rise up when exposed to a trigger. Instead of avoiding certain triggers, PET can provide breathing techniques and other tools to help patients cope.

EMDR is a process in which patients concentrate on the traumatic event while the therapist is doing something else. It could be hand movements, flashing lights, or making sounds. The process attempts to associate a positive emotion with the trauma. The process can take about 3 months of weekly sessions.

SIT is a type of CBT that lasts for 9 to 12 sessions, 90 minutes each. This technique can be performed alone or with a group. During the session, therapists can teach patients a variety of coping skills. These skills help “inoculate” the patient from the trauma-related fear and anxiety.

Medications may help those with PTSD manage the out-of-sync neurotransmitters that lead to an amplified “fight or flight” response. Doctors may recommend medications that affect the neurotransmitter serotonin or norepinephrine (SSRIs and SNRIs). These drugs include Prozac, Paxil, Zoloft, and Effexor.

Why Pharmaceuticals Are Not Always the Best Treatment

Doctors recommend different pharmaceuticals depending on the type of symptoms of PTSD a patient is experiencing. In addition, some medications take some time to work, especially when it comes to getting the right dosage. While medication has helped many cope with PTSD, they also come with some side effects.

For instance, SSRIs can cause negative side effects such as nausea, headaches, mood changes, drowsiness, and sexual dysfunction. This type of treatment, however, has shown limited effectiveness. An increasing group of people are turning to a more natural treatment form to supplement their treatment. Medical marijuana has been shown to provide another way to treat PTSD.

Some evidence has shown that medical marijuana has the power to limit the negative emotions associated with PTSD.  For instance, a study conducted from 2009 to 2011 analyzed PTSD symptoms of 80 patients applying to the New Mexico Cannabis Program. The results show the patients experienced a more than 75% reduction in Clinician-Administered Post-Traumatic Scale (CAPS) symptom score after cannabis use.

A scientific review published in the American Journal of Health System Pharmacist found that a substantial number of military veterans use cannabis to cope with symptoms of PTSD. The report concluded that military veterans reported seeing lowered anxiety levels and improved insomnia after cannabis use.

Anandamide to the Rescue

Some research has shown that people with PTSD have lower levels of anandamide, a molecule found in the brain. Known as a natural antidepressant, anandamide deficiencies can lead to anxiety, fear, memory problems, and other PTSD symptoms. Anandamide is known to target CB1 receptors, the same receptors stimulated by THC in marijuana, in the body's endocannabinoid system.

Nightmares are one of the most common symptoms experienced by people with PTSD. Some research has found that between 71% to 96% of PTSD sufferers have nightmares.  Medications have proven to be effective for some, but cause extreme side effects for others including increased suicide risk.

One Canadian clinical trial, however, has shown that medical marijuana has promise in treating PTSD-related nightmares. A synthetic cannabinoid drug, nabilone, was found to either stop the nightmares or significantly reduce nightmare intensity in 72% of patients. Furthermore, the drug helped them sleep longer, have a better night's sleep, and reduce daytime flashbacks and night sweats.

How to Qualify for Medical Marijuana PTSD Treatment

Why Do Veterans Have a Hard Time Getting Medical Marijuana?

Unfortunately, the federal prohibition of cannabis hasn't helped the plight of veterans. In addition, the Department of Veterans Affairs has labeled marijuana as harmful to veterans. Their website states that controlled studies haven't been performed on the effectiveness of medical marijuana for PTSD.

Despite the opposition from the federal government, many veterans have used marijuana to deal with their symptoms of PTSD. In fact, a majority of veterans support the legalization of cannabis.

How to Use Medical Marijuana for PTSD

Veterans and others with PTSD have tons of options for using marijuana. Below are some of the most common ways to use medical cannabis. Marijuana products are available as THC- or CBD-rich forms, depending on the type of experience you're looking for. A full-spectrum of cannabinoids may help balance the effects of marijuana. Regardless of what option you choose, it's recommended to start with low doses and build up gradually to find your desired experience.

Administered orally or under the tongue for faster absorption rates, tinctures are oil-based forms of cannabis that can instantly ease negative thoughts and allow patients to treat insomnia.

Not interested in inhaling smoke or vapor? Edibles are ingestible forms of cannabis. They can come in capsules, food, or drinks. Because edibles are ingested, the effects can take longer (1-2 hours) to kick in. However, edibles' effects last way longer than other consumption methods. It's a great option if patients want long-term relief from symptoms.

Looking for a fast-acting way to calm down? Inhaling cannabis smoke or vapor provides the fastest onset of effects. Experience relief of symptoms within a few minutes. Relief can last several hours. However, smoking and vaping marijuana may not be the best option for those with respiratory issues.

This classic strain has helped many users with PTSD. OG Kush provides a balanced experience of euphoria and relaxation. You won't experience any of those overexciting effects. Use this strain for a quiet night in or to enjoy with friends.

Enjoy Pineapple Express tropical fruit and earth flavors. It provides an energizing buzz for when you have tasks to do or when you want to create some art. Pineapple Express won't leave you feeling too spaced out. In fact, it can help increase concentration, focus, and creativity.

High-THC strains aren't always the answer. This CBD-rich strain is great for use during the daytime. Use Cannatonic for a fast-acting mood boost or to relieve anxious thoughts.  Allow its mellow buzz to wash over you. It produces a mild and relaxing high.

Master Kush isn't for the faint of heart. New users should take a small dose of this ultra-potent strain to relieve stress and minor aches and pains. Its high-strength effects have helped PTSD patients get better sleep. It provides the right level of sedation and blissful sensations.

For a boost of energy, try this sativa-dominant strain. Experience an increase in motivation and a cerebral buzz. Its calming effects target every part of the body. Use it to keep your mood lifted and your body relaxed.

Side Effects of Medical Marijuana for PTSD

Medical marijuana has helped thousands of veterans get back up on their feet when conventional treatment just wasn't doing the trick. However, using medical marijuana isn't for everyone. Some anxiety- or panic-prone people may actually experience heightened levels of anxiety and paranoia if they consume more marijuana than they can handle.

In small-to-moderate doses, THC can relieve stress and anxiety. However, high doses (especially chronic use) can make people more vulnerable to their PTSD-inducing triggers. Since people can build up a tolerance to the drug, they may consume more and more until they are seeing fewer and fewer benefits.

Additionally, withdrawals from medical cannabis can produce a range of emotions and symptoms. Everything from cravings to aggression to depression can affect those who overly-depend on medical marijuana for PTSD relief. If marijuana is abused, it could hinder a person's ability to lead a normal life and worsen the symptoms of PTSD.

As you can see, the lack of research and federal prohibition is holding back veterans from gaining access to a promising drug and improving their quality of life. For now, veterans can apply for a medical marijuana card (if they live in a state with medical marijuana) or buy marijuana recreationally (if they live in an adult-use state). As always, it's important to consult with a health professional before starting a new treatment program to avoid any medication interactions and side effects.

For more information about the medical, legal, and regulatory developments in the industry, enroll in CTU's online cannabis training program here.