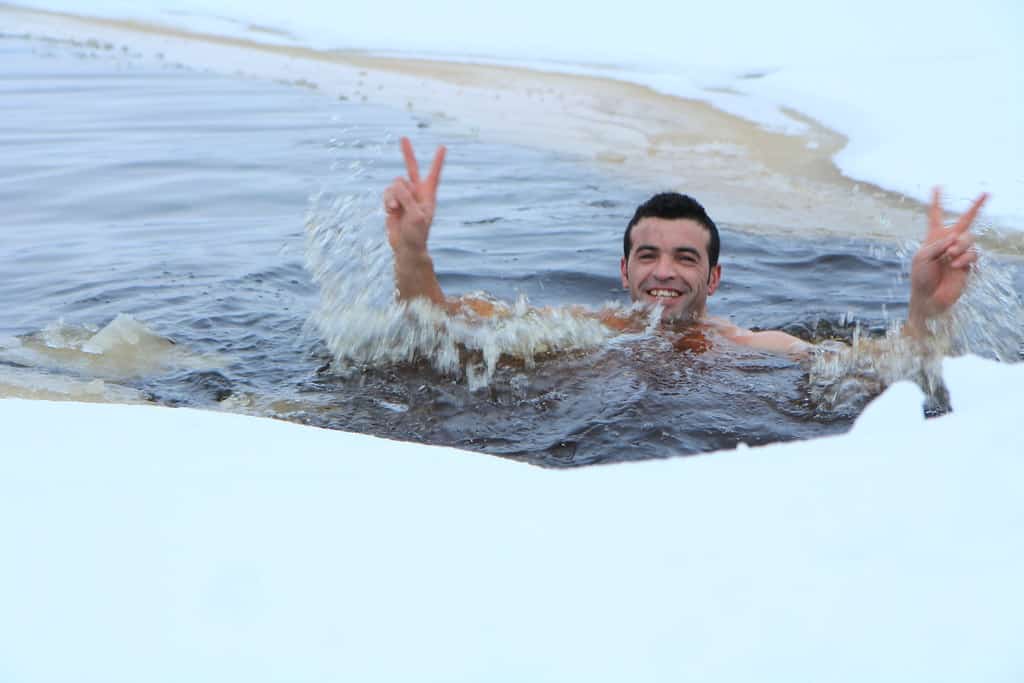 What is the Wim Hoff Method?

While most people can recognize the name Wim Hoffman as the name of the Dutch athlete who is famous for his ability to withstand extremely cold temperatures, many do not understand what the Wim Hoff method really is. It is basically a technique that involves subjecting your body to extreme cold, such as taking an ice plunge.

A recent Netflix documentary which features several staffers at The Goop Lab doing an ice plunge popularized the Wim Hoff technique. Consequently there was a buzz on social media about this technique. Many believe that practicing this technique regularly can improve one’s sense of wellbeing and boost productivity. Additionally, it has been suggested that this technique can help tackle the symptoms of fibromyalgia.

If you are yet to come across the documentary, this is what it is all about.

In the Wim Hoff method the participants perform some breathing exercises and later subject their bodies to extremely cold conditions.

This may be as simple as doing the breathing exercises and later taking a cold shower. Alternatively, it may mean immersing your body in frozen ice and sticking it out for a couple of minutes.

Not many people would survive this naturally. However, practicing the Wim Hoff method triggers the endocannabinoid system to come to the rescue and prevent you from “freezing to death.” One might wonder how this works. A recent research unearthed some interesting facts about the underlying mechanism backing this effect. But before getting there, here is a little bit of history about this technique.

Wim Hoff holds serial Guinness World Records in recognition of his ability to withstand freezing temperatures. He is commonly referred to as Mr Iceman. He holds world records for swimming under ice having his full body in contact with the ice. He also holds a world record for walking on ice and snow barefoot for half-marathon. So how does he manage to achieve this feat? Mr. Hof practices some breathing exercises prior to every ice encounter. This prevents his body from succumbing to the cold. What does this have to do with the endocannabinoid system?

What is the Endocannabinoid System?

The ECS is a system in the human body that is responsible for maintaining a state of physiological balance, also referred to as homeostasis.  The ECS is involved in the regulation of various vital functions in the body including:

The endocannabinoids interact with the endocannabinoid receptors that are distributed in different parts of the body and in this way they help to create homeostasis. The body has two dominant endocannabinoids; anandamide (bliss molecule) and 2-AG. It has been suggested that the WHM raises the levels of endocannabinoids in the body. Let us look at what one research has to say about the role of the ECS in the Wim Hoff technique.

A study that was conducted by Professors at Wayne State University investigated the response of various parts of the brain to the Wim Hoffman technique. The researchers compared the response of Wim Hoffman’s brain to those of other healthy adults. They were astounded to discover that Mr. Hoffman’s brain exhibited significant brain activation in the upper brainstem region as compared to the regions of the brain that are involved in thermoregulation. The upper brain stem is associated with pain control through the release of opioids and endocannabinoids.

The researchers concluded that the Wim Hof method triggered the ECS to release endocannabinoids which produce relaxation, reduced anxiety, and analgesia. This is what enables Mr. Hofman to survive the extreme cold.

Earlier research corroborates this finding; aversive stimuli to the skin trigger the pain regulating mechanisms of the ECS. The results also suggested that the WHM triggers the ECS to reduce immune response. This effect can be used in the management of autoimmune conditions such as fibromyalgia.

Performing the WHM could result in a number of health benefits; that is why this technique is gaining popularity. It is however interesting to learn that the underlying mechanism of this technique has to do with the stimulation of the endocannabinoid system. Hypothetically speaking, since marijuana has a similar effect on the ECS could it afford similar benefits as this technique?

How to Perform the Wim Hof Method at Home

Get a quiet space where you can lie down on your back comfortably. Take 30 deep breaths by filling your stomach and lungs fully with air and breathing out in a cyclic wave. After the thirtieth breath, expel all the air from your lungs and stomach and rest for 15 seconds. Breath in and hold the air in your lungs for 30 seconds, you will begin to feel your whole body and mind fill up with endocannabinoids.

Repeat the 30 breaths cycle 2-3 times. After this, take a cold shower and you will be done and ready for a rejuvenated day.

This wraps up our discussion on the Wim Hof method and the endocannabinoid system; please try it at home and let us know how it goes.