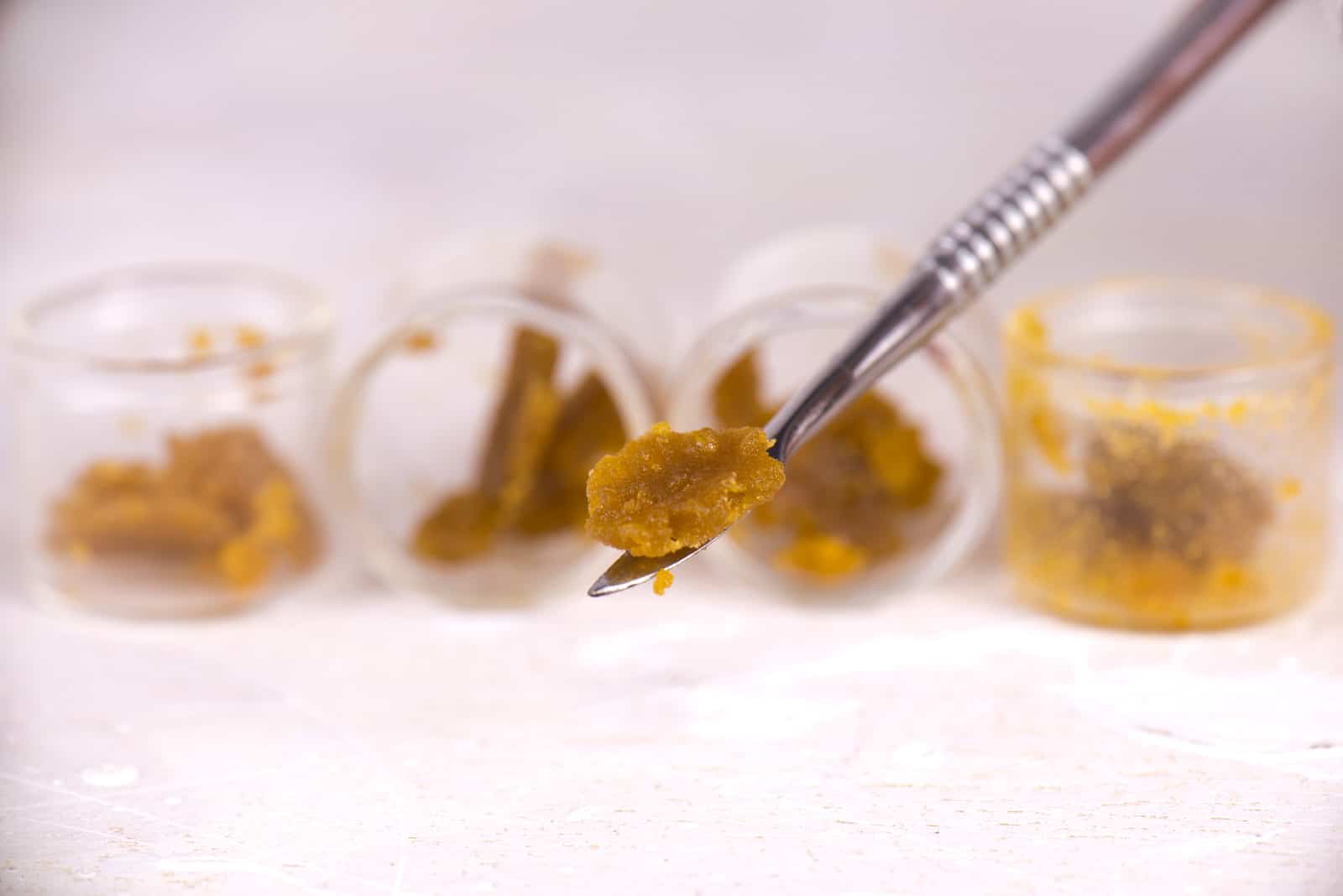 Anyone who has used Vicks® VapoRub to clear their sinuses or ease a cough, or has applied Campho-Phenique® to ease the itch from poison ivy, or has filled their diffuser with rosemary oil to help diminish the pain of a headache has used the terpene known as camphene. But, what exactly is a terpene?

Terpenes are what makes lemons taste and smell citrusy. They are what makes pine tree sap smell, well, piney. Basically, terpenes are molecules that give, mostly, plants their unique aromas. The healing properties of terpenes are what differentiate the uses of essential oils in aromatherapy. Like other plants, cannabis strains also contain terpenes, some more predominant than others, which contribute to the medicinal property(ies) attributed to the strain.

In cannabis, these terpenes, when combined with the plants other healing components, create what scientists refer to as the “entourage effect,” which simply means that the therapeutic impact of the plant as a whole is more effective than the sum of its individual parts.

Not all of the approximately 200 terpenes found in cannabis manifest in large enough amounts to be noticeable; however, many do appear in specific strains, contributing to the medicinal and, let’s face it, enjoyable effects of cannabis in its various forms.

Digging deeper, there are monoterpenes, diterpenes, and sesquiterpenes; these are differentiated from each other by the number of repeating units of a five-carbon molecule, isoprene. Terpenes found in cannabis can help kill respiratory pathogens, increase blood flow, treat pain and inflammation, ease the negative effects of depression and anxiety, and quell the symptoms of epilepsy, among other uses. Today’s cannabis breeders can isolate and enhance various terpenes to produce new flavors.

We’ve already established that camphene is marked by its pungent, damp, earthy, herbal aroma—lending to its sinus-clearing, anti-inflammatory properties. The scent is often mistaken for another terpene: myrcene, which has the traditional “marijuana” smell.

In fact, camphene has a multitude of medicinal properties, including: analgesic, antibiotic, anti-edematous, antifungal, antiviral, atmospheric antiseptic, bactericidal, and expectorant. When camphene is combined with vitamin C, it becomes a highly effective antioxidant. Camphene has also been found to reduce cholesterol and triglycerides levels in blood serum, which could decrease the occurrence of heart disease.

A monoterpene, camphene is found naturally in sage, bergamot, cypress, nutmeg, rosemary, fir, ginger, valerian, citronella…and cannabis, especially in indica strains, including Mendocino Purps. In addition to its medicinal advantages to humans, camphene helps protect the cannabis plant itself, as the camphene acts as a repellant to herbivores, yet also attracts pollinating insects.

With camphene being the primary terpene in such herbs as sage, rosemary, and lavender, it’s somewhat easy to recognize by its pungent, musky, earthy scent—which also makes it a popular terpene to use in fragrances, food additives, topicals, and oils. As a result, you’ll find a variety of cannabis-based lotions, salves, and creams that use camphene for its scent and especially for its medicinal properties as an antifungal and antibacterial in treating common skin conditions, such as eczema and psoriasis.

When choosing a cannabis strain high in camphene for its medicinal properties, be aware that this particular terpene was used as a fuel for lamps in the mid-1900s—and it had a nasty propensity to explode at high temperatures (it was eventually replaced by kerosene).

This terpene can produce an acrid smoke; however, it also, ironically, can be used to treat inflammatory lung diseases when kept at stable temperatures. Camphene is, undoubtedly, strong, but its medicinal benefits are abundant.

Although camphene most often appears in indica-heavy strains like Mendocino Purps, it is also present in Ghost OG and Strawberry Banana.

Derived from OG Kush, Ghost OG is an indica-dominant hybrid. Breeders believe it is a phenotype of the original OG. Smelling of citrus, floral notes, pine, and damp earth, Ghost OG also provides flavors reminiscent of oranges and grassy notes. This strain’s bright, lime-green buds feature crystal milky trichomes immediately prior to harvest. A clone-only strain, Ghost OG is highly resistant to diseases otherwise common to cannabis, making it fairly easy to grow, maintain, and cultivate. Ghost OG typically contains around 15% THC; however, that level could reach 18% or slightly more. CBD content is rarely over 0.3%.

Ghost OG is not for beginners. Its effects are potent, eliminating stress and anxiety and providing both mental and physical relaxation, making it especially useful for people who have anxiety disorder. It can, though, also cause the user to experience feelings of joy and creativity.

Being a strain high in camphene, Ghost OG also offers analgesic effects, making it helpful for people experiencing pain and muscle aches. Insomniacs can also benefit from Ghost OG, as it often makes one feel tired. It’s also good for cancer patients suffering from depression, nausea, and decreased appetite. This is not a strain to use if you have things to do…you’ll pretty much be in for the evening after partaking.

A 70/30 indica-dominant strain, Strawberry Banana is a genetic cross between Banana Kush and the “Strawberry” phenotype of Bubble Gum, thus its name. This resin-heavy strain features a high THC content, which provides effects of happiness, contentedness, and heightened creativity. True to its name, this strain offers fruity, candy-like aromas and flavors of bananas and strawberries.

Again, like the Ghost OG, Strawberry Banana, with its camphene content, aids in pain relief and depression/anxiety. THC content ranges from 22% to 26% on average. Also like Ghost OG, Strawberry Banana is highly disease resistant, which makes it one of the easier strains for beginners to grow. The buds can become tinged in purple if exposed to cooler temperatures. They are covered in sticky trichomes and resins.

The effects of this strain are powerful, like Ghost OG, but can offer strong relief from chronic pain (MS, back pain, fibromyalgia, etc.). Be prepared to spend the day on the couch if you plan to enjoy this strain, making it helpful for those suffering from insomnia.

Also called “Mendo Purps,” this strain is technically a hybrid and is strongly indica dominant, with THC levels reaching around 20%. As its name suggests, Mendocino Purps hails from Mendocino County, California. Featuring earthy aromas and flavors, Mendo Purps was once offered only as clones, but now is available as seeds from BC Bud Depot.

With its bright-orange hairs, Mendo Purps buds are both beautiful and unique. Like the two aforementioned strains, Mendo Purps is a deeply relaxing strain, making it perfect for use prior to bedtime. This strain’s medicinal properties include pain relief, especially for those with muscle spasms.

It also provides relief from nausea and lack of appetite, making it helpful for those fighting the devastating effects of cancer. People who suffer from anxiety disorders may find that Mendo Purps helps to relax them and alleviate their stress.

Don't Miss Out on Camphene

For those who use cannabis to provide pain relief, a break from stress and anxiety, and an aid in fighting insomnia, give strains that feature camphene a try. But be prepared to be in for the evening! Sign up for more at the best medical marijuana college today!

Get your mmj career training online at the 420 career source. Earn your mmj degree online at the leading 420 college, the Colorado cannabis university, Cannabis Training University.