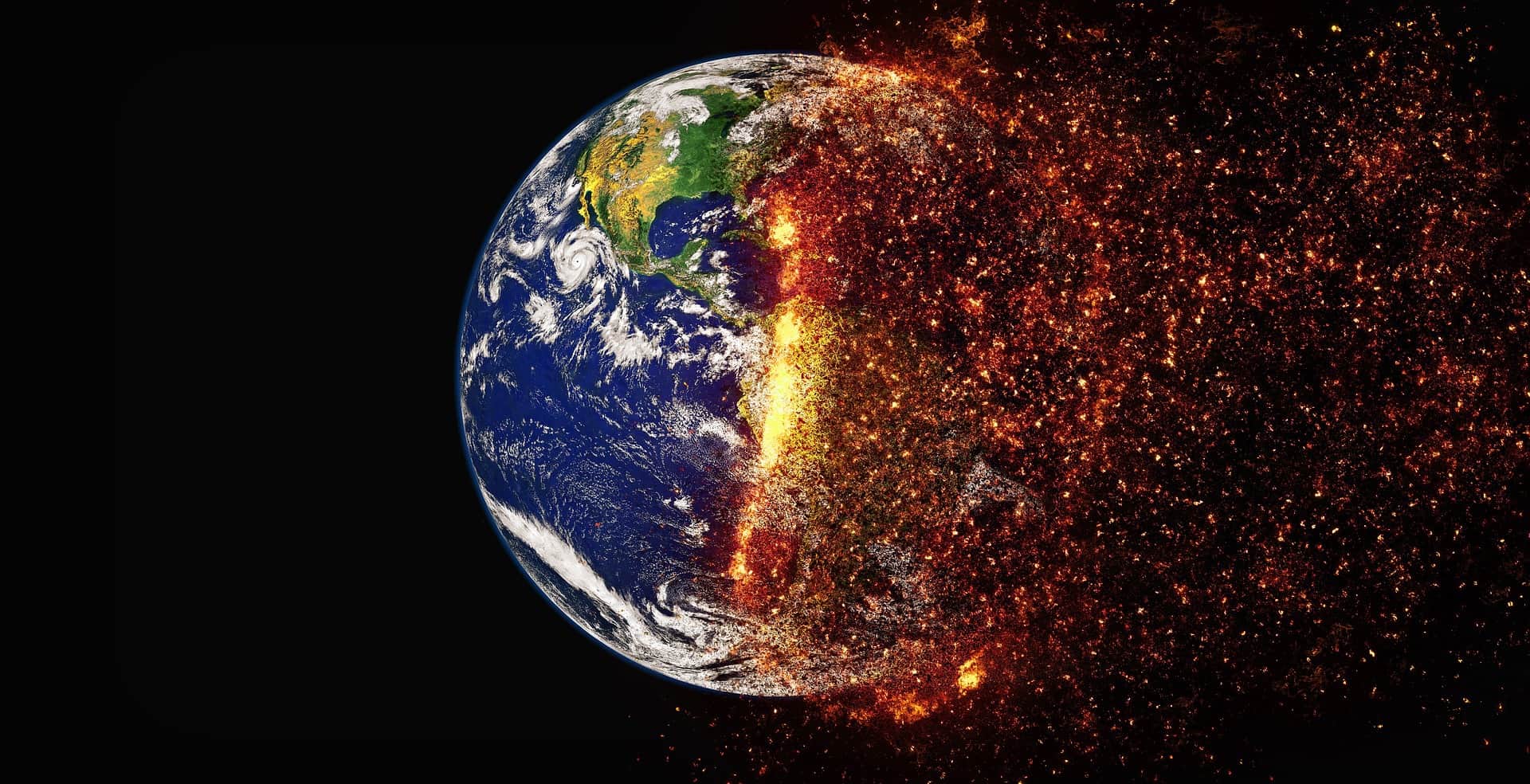 Can Hemp farming be the answer to the detrimental effects of climate change? Recent protests and global summits have brought climate change to the forefront of the international conversation, but it may be too late. It would seem that our single-use, wasteful society contributes greatly to the changes we see. Signs of climate change are extreme and could induce a scare in the most unbelieving of us.

·       Increased temperatures all over the globe

·       Extreme natural disasters, as well as many others

As a result of this, everyone needs to minimize their carbon footprint to decrease harm to our environment by:

·       Planting more trees and growing your own food

This is where hemp farming comes in. Its vast characteristics and properties can contribute significantly to our fight for less carbon footprints and generally improving the climate.

What Factors Cause Global Warming?

Before we get into how to resolve global warming, perhaps we need to understand what causes it in the first place.

Global warming happens when carbon dioxide (CO2) as well as other air pollutants together with greenhouse gases collects within the atmosphere. They then absorb solar radiation and sunlight which has bounced of the surface of the earth. In normal circumstances, this radiation would find its way into space.

When this radiation is unable to escape, it could last for years; trapped in the atmosphere for centuries, it eventually causes the temperature of the planet to rise. This is called the greenhouse effect.

The burning of fossil fuels for the production of electricity remains the biggest contributor of heat-trapping pollution. Power plants that use coal contribute the largest source of carbon pollution followed by the transportation sector that generates approximately 1.7 billion tons of CO2 emissions every year.

What then is the best way to slow down climate change?

Climate change could be slowed down by the simple act of planting more trees. It is basic knowledge that trees remove carbon dioxide (CO2) from the environment and release oxygen instead.

The Role Of Hemp In Fighting Climate Change

Hemp is a cannabis variety that does not have psychoactive effects, which means that it does not induce a high. In the recent past, it has catapulted itself into fame with a booming CBD market that exceeds $2 billion globally. This new trend however has very deep roots. Hemp farming was an ancient practice that has slowly evolved over time.

Why could hemp cultivation be the most cheap and effective way to effect climate change?

Though we all know that planting trees is important, the issue of available land, time and cost often gets in the way of us actually doing something about it.

Hemp is a different crop that might have the similar effects as trees on the environment as well as it being faster and more cost effective.

For decades, hemp was illegal in the U.S. However, the 2018 Farm Bill changed this and the U.S. has quickly grown to be the third largest grower of this precious plant. There's close to 500,000 licensed total hemp acreage, with more projected under the new presidential administration.

Hemp has a myriad of benefits that could benefit the fight against climate change:

·       It has a staggering growth rate that's hard to match by any other forest or commercial crop. Remember the growth of a plant in itself requires the absorption of CO2. It can grow up to 13 feet in 100 days.

·       It can do well on poor quality soils will even minimal water.

·       Its absorption of carbon dioxide per hectare exceeds any other crop or tree. It then uses solar energy to break down and convert atmospheric CO2 into hydrocarbons and water.

In addition to reversing the effects of carbon dioxide emissions, hemp also contributes in a very big way to reducing carbon footprints in other ways. Here are some:

Hemp Products Such As Rope and Cloth

Since ancient times, hemp has been used in the making of ropes and hemp apparel. The impact of having rope made non-biodegradable material and clothing made from material such as acrylic is far reaching and harmful to the environment. An advantage of hemp is that in the right formulation it could even be used to make water proof clothing that would be eco-friendly, recyclable and can be broken down.

Turning to hemp products can greatly improve the carbon footprint we leave behind us.

The effects of pesticides use are well known and far reaching. It has been linked to the development of Alzheimers disease, cancer and even birth deformities.

The use of pesticides and herbicides is not required in the growth of hemp and that is a big win for the environment and ecosystem.

As we have discussed earlier, hemp is a plant that does well in all terrains. This is perhaps the reason why it is often referred to as a weed. Despite the fact that it grows anywhere, its deep roots tend to hold the soil together preventing erosion.

Its stems and leaves are also packed with nutrients, which when they fall to the ground, they create humus and make the soil more rich and fertile.

We all know the negative effects of plastic on the environment and its role in affecting climate change. What we might know is that the primary material for plastic, cellulose is derived from Industrial petroleum. This form of cellulose is not only non-biodegradable, it also poisonous as its ingestion can lead to diseases such as cancer. Add to this the effects disposed plastic has on our seas and land, and you would be forgiven for wondering why we still use it.

Hemp provides an eco-friendly, biodegradable form of cellulose. The cellulose derived from hemp is not only east to derive, it is also eco-friendly, re-usable and bio-degradable.

All those plastic bags, water bottles and other plastic products end up either in the sea where they wreak havoc and destroy the balance of the sea, or end up in landfills which have their own hosts of issues. Some people choose to burn up plastics as a way of disposing of them. You can imagine the amount of toxic gases that are let out into the environment as a result of this.

On the other hand, “plastic” made from hemp is non-toxic and can be broken down into natural components. What this means is that even if it makes its way into the sea, it will simply break down and be absorbed into the eco-system.

Bio-products that are made from hemp can be quickly and easily recycled of broken down which is a great relief for the environment, and for the effects the use of plastics has on the climate.

Over a period of time, some soils get contaminated due to the chemicals used on them or surface runoff from contaminated sources of water. This has a huge impact on the ecosystem and could also end up with the food on our plates being contaminated, causing adverse effects to us.

It has been found that after growing hemp, the levels of toxic metals decreased for the apparent reason that they were absorbed by the plants.

The fast rate of deforestation to cater for items such paper is alarming. In some instances, trees are cut down to produce paper that took up to 30 years to grow.

Did you know that hemp can be used to produce paper? Do you know that the quality of this paper is even higher than most other trees?

Hemp is capable of producing more than four times what a particular section of land can yield. Take into consideration that hemp trees mature in a matter of months and you have an alternative to cutting trees that is both cost-effective and beneficial to the climate.

An Alternative To Fossil Fuel

The world has desperately been seeking for an alternative of fossil fuels. Hemp can be converted into biofuel with an outstanding 97% effectiveness.

When compared to other options for biofuel options, hemp requires lower temperatures and has the advantage of having fragrant emissions, as opposed to burning used cooking oil.

As we mentioned earlier, it is scientifically proven that the growing hemp plants trap and absorb carbon dioxide from the air. In fact, for every ton of hemp, 1.63 tons of carbon dioxide is captured.

It is without doubt that hemp farming can have a great impact on climate change. As such, there should be an even louder call to urge the world to switch to hemp, thereby saving ourselves from the adverse effects of climate change.