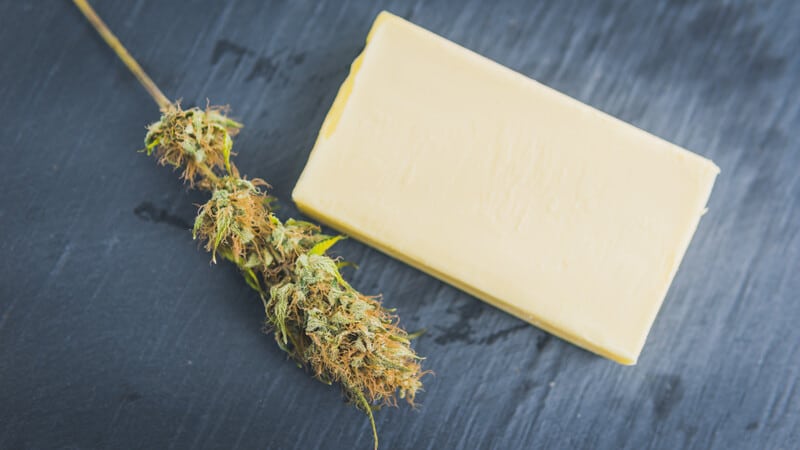 What is budder? Budder, not to be confused with cannabis butter aka canna-butter, can be defined as inherently being concentrated butane hash oil. But to be more precise, it’s a type of THC-rich cannabis concentrate with an amber/yellowish color and smooth texture that resembles regular butter. What do butter and budder have in common? They can both be used for making edibles – indeed.

Butter aside, and setting our sights on wax budder, it’s the creamy consistency of budder that captures the eye. Budder is similarly defined as a cannabis concentrate made by soaking marijuana flowers in a solvent.

As the solvent evaporates, it leaves behind an oily substance with the ability to be manipulated to produce different consistencies – of concentrates – including wax, shatter, crumble, honeycomb, and of course, budder.

The Characteristics of Budder – What Makes it So Special?

So, what sets budder apart from its other concentrate counterparts – in other words, what is budder, really? Borrowing its name from the consistency of the final product, we know that budder looks and feels a lot like butter.

Thus, to start with, budder has the creamiest consistency of all the concentrates, which is the most desirable factor. Potency-wise, recent advances in extraction technology means budder can store up to 80% THC, notwithstanding 90% on occasion.

Filled with delicious smelling and tasting terpenes that carry a ton of health benefits, these also ensure a more flavorful smoke than its concentrate counterparts. Even its consistency holds advantages.

While the downsides to shatter include its tendency to break off easily, and oils don’t remain on a dabbing tool for long enough, budder is easy to serve up for a smooth smoke.

Another factor that makes budder so special is its ability to be manipulated. Fully liquid oil concentrates tend to be very tedious in terms of user-friendliness, while harder concentrates like shatter are too solid and tend to break off, which creates a lot of hassle with every use. Finally, lest we mention the versatility of budder.

If you want to, you can sprinkle it in your joints, dab it, vape it, or inhale from a bong. If you’re thinking about using it in edibles, just be sure to heat it in an oven first to activate the cannabinoids – in very small portions

Please beware, that if handled improperly, the process of making budder with a solvent such as butane could cause an explosion and kill anyone too close to the operation. It’s generally not recommended for anyone and everyone to try and make their own batch of cannabis budder at home.

With that said, from a safety perspective and given that one is an expert, it is far better to use CO2 extraction, propane or rosin extraction than butane because the latter is highly volatile.

It is also true that DIY extraction with butane leaves behind more impurities that render the substance harmful to your health.

Fortunately, there are other solvents you can use to try your hand at a safer means of DIY extraction, such as isopropyl alcohol. Another way of making budder without butane, is by using the ice method and calling the end product ‘rosin budder’.

How to Use Wax Budder

There are three ways to show reverence and respect to this high-quality concentrate. The first, is to break apart your budder with a dabbing tool or similar small utensil and add it to a joint.

The budder can be sprinkled along the length of the joint, and for the best smoking experience, ensure the budder is spread evenly along the joint.

The most popular way to use budder is to use a dab rig or a vaporizer tool. Both of these smoking gadgets can come at a pretty penny, but is worth the investment if you want to show the budder its real worth.

When using budder, the important aspect to focus on is the temperature. Since this particular concentrate exhibits a ton of terpenes, excessive heat is sure to destroy these precious and delicate molecules.

Always remember the golden rule of dabbing: To preserve the taste and quality and potency of terpenes, the temperature should never be exceeded by too much when dabbing or vaporizing.

What is budder? A form of cannabis concentrate, that has recently surpassed the popularity of stable concentrates like shatter. With a saucier and much softer liquidity than other concentrates, many cannabis connoisseurs have shifted their to tastes to the abundance of terpenes in what is also known as cannabis wax budder.

If you’re not sure whether to commit to shatter or wax, budder is a solid middle ground choice. Shatter tends to break off and get lost if you go at it with a tool when in its raw form. And where oils are hard to keep on a tool for, budder, on the other hand, is by far one of the easiest concentrates to scoop and serve consistent dabs with.