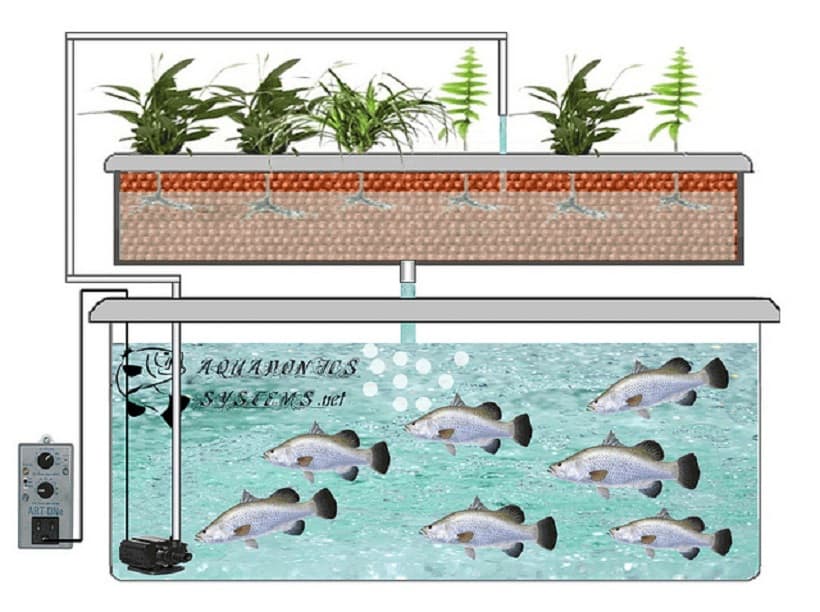 What is the aquaponic system you may be wondering? Well, it is a method of growing marijuana that involves two effective and efficient systems, combing each of them so they can symbiotically work to benefit each other. This process is similar to aquaculture where people farm fishes like blue gill, shellfish and tilapia. Hydroponics is also similar in that you grow marijuana plants without using soil. Combining hydroponics and aquaculture process means that you create a closed loop system for both the fishes and the plant and make sure it is feasible for consumption. Let’s take a closer look at the aquaponic system.  Another time, we will examine growing marijuana in a greenhouse.

The Aquaponic Systems and How it Works

You would use a double root zone to set your system. The bottom half can be filled using hydroponic means or you can suspend the roots in water. The aquaponic system and hydroponic system are almost identical in many ways. The primary difference is the nutrient source. In this process, no nutrients are added to the water tank, but rather, you would produce them using the waste of the fish. The waste would be diluted and pumped and placed on the roots of the marijuana plant. The roots will absorb those nutrients and believe it or not, the water will be purified prior to it returning to the aquarium. The only input that you will need is fish food. You can grow this yourself or buy it locally.

The main nutrient that the fish waste will produce is nitrogen and this nitrogen will have traces of other minerals. Unlike the hydroponic system, the aquaponic system is also used to grow leafy vegetables and fruits, in addition to cannabis. However, for cannabis, you are going to need added nutrients such as potassium and phosphorus. The double root zone provides the remedy. What is a double root zone?

You will be able to divide the roots by section with the double root zone. The bottom half of your pot has to be submerged into the water while you fill the upper half with soil. By doing this, you will permit the added nutrients to be effectively applied to your roots so that the water is not contaminated. You will have divided the roots into two sections and then separate these sections by using burlap. This allows your roots to travel through as the soil is prevented from reaching the water. When you are giving your plants water with the added nutrients, be sure not to saturate the soil too much because it is important that the water in your aquaponic system is kept clean at all times.

There are several benefits to growing marijuana in an aquaponic system. For one, you will have multiple returns. As you grow your marijuana plants, you will also be raising some fishes that are protrient-rich. Usually, the tilapia will be ready within six to nine months, reading their desired size for human consumption. However, the speed at which it is grown will rely on the temperature of the water. Another benefit is sustainability. The aquaponic system is sustainable for marijuana growth. As long as there are no toxins, you can ensure sustainability. All you are going to need to encourage sustainability is fish food. So, you are growing the weed along with the fish in the same aquaponic system. So, you are also going to need the added nutrients for the layer of your top soil to get both healthy marijuana plants and healthy fish to be consumed. Other benefits include the fast growth rate that the aquaponic system provides and less water used in comparison to a hydroponic system. The only downside is that the upfront cost of using this system is more expensive. Learn more about growing marijuana indoors by going to the Cannabis Training University.