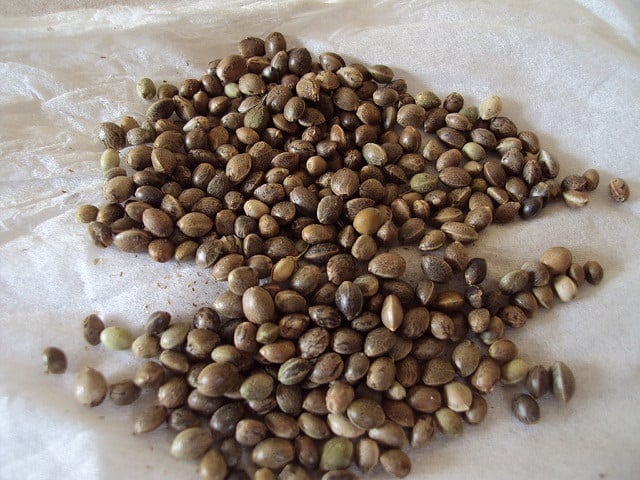 How to Feminize Seeds

It's important to learn how to feminize seeds so you can save time on your grow. When the traditional fertilization methods are used to grow your marijuana plants, you have less control over the gender of future marijuana plants.

That is why many marijuana growers take extra steps so you receive female marijuana plants at the time of harvesting. To do it yourself, feminize seeds prior to your harvest.

What are Feminized Cannabis Seeds?

Feminized cannabis seeds produce only cannabinoid- and trichome-rich flower buds on female cannabis plants. Cannabinoids and terpenes are responsible for the potency, aroma, and flavor of cannabis.

A crop that uses high-quality feminized seeds will produce a female-only crop without the presence of male plants, which can pollinate your crop and potentially reduce your yield.

Another type of seed, a regular seed, is a result of natural pollination and breeding male and female seeds together. Cannabis growers working with regular seeds have a 50% chance of either yielding a female or male marijuana plant. Growing from regular seeds isn't the best option if you’re looking to strictly grow cannabis buds. While male plants serve their specific purpose to pollinate females, they don't produce the trichome covered flowers that female plants do.

How Are Feminized Seeds Made?

Feminized cannabis seeds serve a major purpose for commercial and home growers. Feminized seeds can be made by inducing a regular female cannabis plant to grow male sex organs that contain pollen. The hermaphroditic pollen will contain only the female X chromosome and no male Y chromosomes.

When used to pollinate a female cannabis plant, the seeds produced between the two plants will inherit two X chromosomes meaning that all subsequent seeds will be feminized.

The Benefits of Growing Feminized Seeds

Growing feminized cannabis seeds has many benefits over regular seeds. For one, growers don't have to hedge their bets hoping that the regular seeds will produce female plants. Instead of planting more regular strains than needed to get lucky and get enough females for your specific purpose, you can stick with a sure bet using feminized strains. Using feminized seeds can speed up the growing process by eliminating the need to watch out for male plants, saving you time and space.

Male plants run the risk of pollinating female plants causing them to develop hermaphroditic structures and, ultimately, lower your plants’ yield compared to a grow without male plants. Weeding out the male plants, however, takes time and energy. Male plants display their sexual organs when the photoperiod changes naturally or when indoor lighting environments change.

Growers that don't want to spend the time monitoring the plant every day can use feminized seeds to ensure that their garden will grow flower buds. Otherwise, growers will have to keep their eyes peeled for male plants and remove them from the grow immediately.

Generally speaking, there is no way that you can determine the difference between male and female marijuana seeds in the initial stages of planting. In addition, you are also not able to change the gender of your marijuana deeds. The concept of having feminized marijuana seeds is to maximize the female seeds that will be part of your marijuana crop. Why would you want female marijuana plants? Well, these are known to have a higher level of THC content. Male plants have reduced THC content and for that reason, female plants take precedence over male plants. With cannabis seed feminization, there are several pollination techniques that the marijuana grower can use for a favorable outcome.

Some “feminized” seeds may produce hermaphrodite plants if the seeds are of low quality. High-quality feminized cannabis seeds from reputable seed banks have been bred to not display hermaphroditic characteristics under optimal growing conditions. If you’re looking for a sure thing, carefully consider your cannabis seed source.

If you are going to do the feminization of marijuana seeds yourself, then there are methods that you can use namely:

Each of these methods should be successful, if used in the right way to produce female marijuana plants. Let’s quickly look at each method briefly.

One of the simplest ways to produce feminized cannabis seed is to pollinate your plants yourself. Some cannabis strains can produce male flowers when the colas have reached late ripeness. Side note: Ed Rosenthal, master grower and proud member of the CTU faculty, prefers to harvest plants around this time. Harvest the pollen by using a clean and small painting brush to transfer the pollen into a metal or glass container or in small amounts directly on the flowers.

Some outdoor-friendly cannabis strains may become stressed when grown in indoor environments, which can increase the chance of producing hermaphrodite flowers. Indoor growing environments can stress plants with fluctuating light cycles and heat. Stress training techniques are difficult to pull off, even for experienced cannabis growers. If you do happen to spot a hermaphrodite with pollen, collect the pollen and save it for later use when you feel comfortable using it.

The Silver Thiosulfate Solution, also known as STS, is one of the most common methods of generating female marijuana seeds. It is very effective in allowing female marijuana seeds to be available to marijuana growers. Using this method will feminize the seeds in the best way possible, making more available on the market for growers. The solution is made of a combined silver nitrate and sodium thiosulfate. The solution result is a hormonal response to stress found in the marijuana plant. Because of this, gender change is triggered.

You can do all of this yourself, but the marijuana plants have to be wisely chosen. You should only take female plants from a single cannabis strain that is almost mature. Then you would separate the plant from the bunch and spray the plant with STS. Allow it to dry and then replace it, making sure it sits alongside the other plants in the bunch.

Gibberellins are hormones that affect cannabis plants throughout their growth cycle. Some gibberellic acids such as GA3, 4, 5, and 7 can induce the growth of male cannabis flowers when sprayed directly on female plants before the flowering period. Most growers use GA3, the most widely available and effective of the gibberellic acids. Use a solution of 0.1 gram of GA4 per liter of distilled water. Ed Rosenthal recommends spraying the top of plants for five days in a row then changing the photoperiod to induce flowering.

With the colloidal or pure silver method, you also need distilled water. Use a spray bottle to apply this mixture to your female marijuana plants, but you have to do it when the plants are flowering. Pollen sacs will be formed. The pollen has female genetics, allowing the marijuana seeds to produce female plants.

The Rodelization method calls for the reaction of the female plants when they are stressed. Pollen sacs will grow when plants are stressed and not fertilized. Due to the fact that resulting marijuana seeds are exclusively derived from female genetics, it is likely that these to be female seeds and not male seeds.

If you want to learn more about these and other methods of how to feminize marijuana seeds, enroll now in Cannabis Training University's marijuana certification courses!