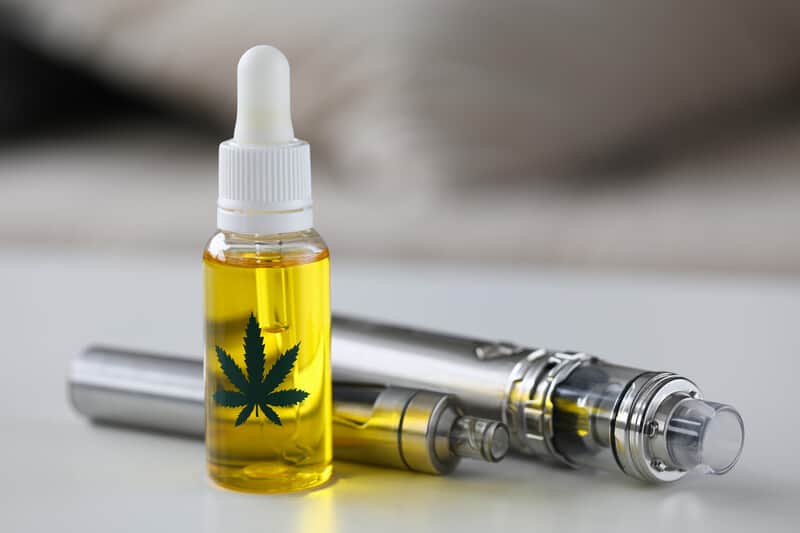 Are vape pens safe to use to vaporize marijuana extracts? Well, the THC vaping industry is relatively new and there hasn't been any standardization for the products.

There have been multiple reports of injury and disease risk with vaping pens for marijuana use. Is a vape pen bad for you automatically or is it more about the quality of the cannabis vape oil and the vape pen itself?

Using a safe vape pen for cannabis is theoretically a healthier choice than smoking marijuana. Marijuana smoke can cause excessive tar build-up in the lungs and lead to health risks over time.

While marijuana smoke seems much less carcinogenic than other types of smoke, any burnt material inhaled into the lungs will cause exposure to carcinogens. To what degree is up for debate still with cannabis smoke.

Vaping pot creates a vapor from cannabis oil instead of smoke. This reduces the chances of tar build-up and carcinogenic smoke.

In a perfect world, vape pens for weed would be better than smoking. However, the industry's lack of regulations means that not all vape pens are safe!

Is a dab pen bad for you when compared to consuming marijuana through food?

Consuming marijuana that has been cooked to the right temperature to activate the decarboxylation process of the cannabinoids may be the healthiest way to consume cannabis.

There is no risk of harmful smoke or vapor from oil with harmful additives.

Many marijuana users note a distinct difference on the high when eating marijuana vs smoking or vaping.

Eating THC laced food will create longer highs that create a different experience altogether. Panic attacks and trips to the ER commonly get passed around cannabis smokers' circles, so it may not be a better choice automatically.

If a vape pen can confirm to strict standards of manufacturing and ingredients it could be just as safe as eating marijuana-laced foods.

There are some bad things about vaping marijuana in the current state of the industry. Dab pen dangers usually stem from the issues listed below. Wax pen dangers can be mitigated with proper manufacturing and cannabis extraction processes, making the use of a dab pen safe.

Are e-cigs safe if they are used to vaporize cannabis oil? Yes, if the additive used to thin out the liquid is safe.

But, are e-cigs bad for you if they contain Vitamin E Acetate, Propylene Glycol, or Polyethylene Glycol? Yes!

Vitamin E Acetate is known to cause Popcorn Lung, other lung diseases, and even death when vaporized.

The other two ingredients are extremely carcinogenic when combusted. While vape pens shouldn't heat the oil to the point of combustion, many of them do!

Are dab pens bad for you if they contain any additives? Not necessarily. The ingredients must be known to be safe though!

Are vapes bad if they are used to consume organic cannabis extracts? Nope.

Pesticide inhalation through the THC vape pens isn’t studied enough to directly label as unsafe, but we have a pretty good idea that it isn't safe.

But, the vaping industry remains unregulated and many vaping units heat the pot oil to combustion-level temperatures, essentially creating weed smoke and causing carcinogenic exposure through the combustion of harmful additives.

Are wax pens bad for you if the temperature isn't regulated? They definitely can be!

Many vape pens are made with plastics too close to the heating elements. Too much heat can release carcinogens into the vape you consume. Cheaper units are typically guilty of this design flaw.

Are wax pens safe to vaporize marijuana? Not if they explode when you use them! While rare, vape pens have been known to explode on occasion. This is typically due to a battery malfunction.

The quality of your cannabis extract oil will alter the effects and safety of your vaping experience as well.

Dab pen effects are typically much different than smoking cannabis. This is because terpene profiles are altered during extraction processes.

While some companies may label the products as full-spectrum cannabis extract, there are no regulations on using that term. Terpenes interact with cannabinoids, causing the entourage effect. This can be absent from vape oil.

Vaping low-quality BHO extracts could lead to the inhalation of butane, which can carry health risks. Using extracts made with supercritical CO2 extraction for less solvent residue in the final product is a good idea.

Also, using a cannabis extract oil that has went through winterization is smart. This works for the removal of lipids that can build up in the lungs if present in vaping oil.

So, Are Vape Pens Safe For Marijuana Use?

The safest vape pen in the world using high-quality cannabis extracts could be one of the safer ways to consume marijuana. However, the industry has no regulations and cheap products flood the market. If you can find a well-made vape pen and oil that labels all ingredients found in the oil itself that meets safety standards, vaping marijuana with vape pens can be safe.

But, are vape pens safe if they aren't held to those standards? It's hard to tell and might not be worth the risk to your health! You can learn more about cannabis extracts and consumption here at Cannabis Training University, the leading weed school.