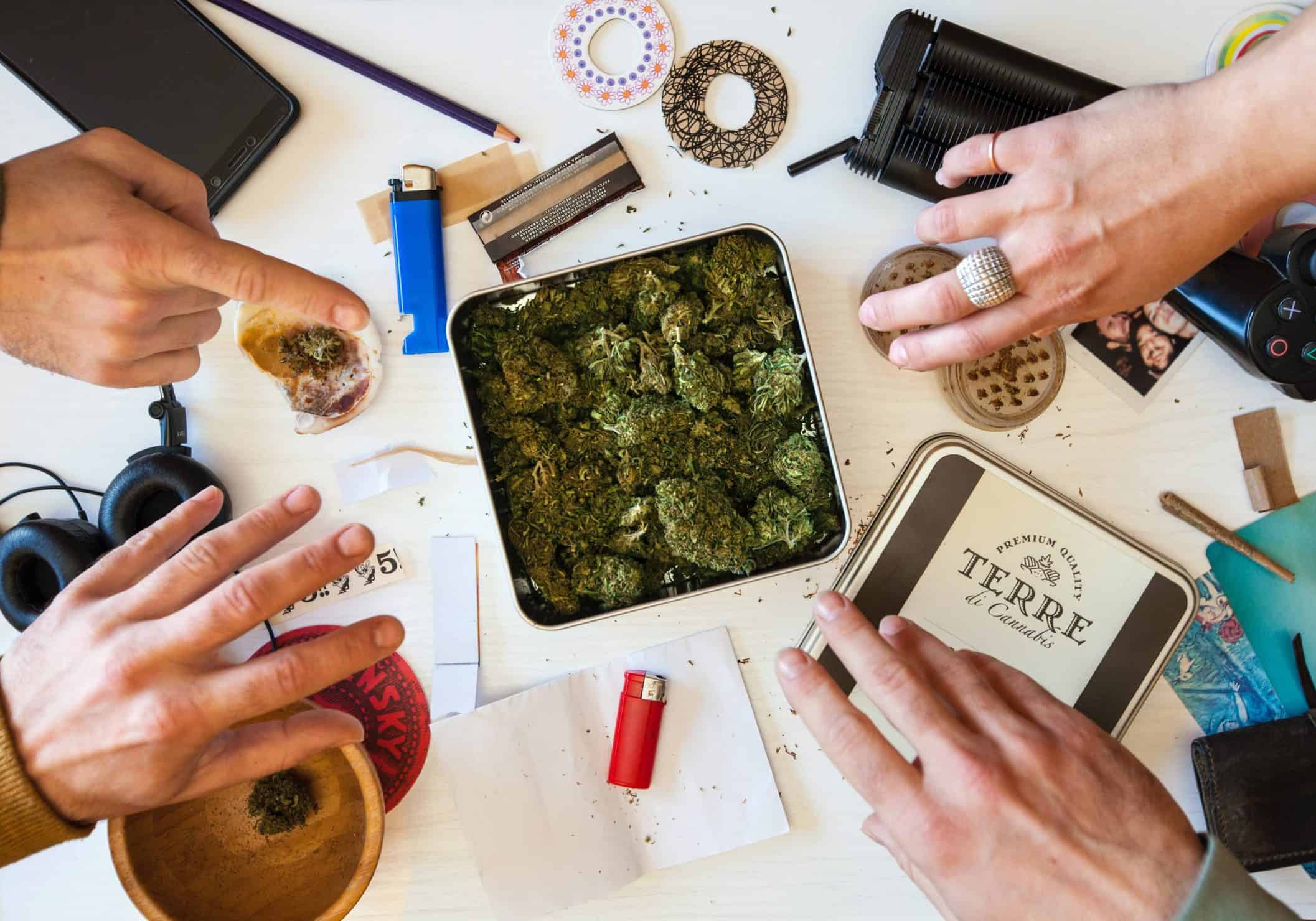 Portable Vaporizers: Cannabis on the Go

Considering their current popularity, cannabis vaporizers are fairly new on the scene. While smoking will probably always be the common method of consuming cannabis and cannabis-concentrate products, vaporizers are quickly gaining popularity, particularly among the millennial generation, which is fond of dabbing.

Vaporizer pens used for hash oil are the most inexpensive and commonly used vaporizers on the market. With some notable exceptions, the majority of pen vaporizers are manufactured in China, and they work quite well most of the time. Cold temperatures can compromise their use, but all-in-all, vaporizer pens are a worthwhile, relatively inexpensive device to purchase, and they are very handy.

There are a variety of compelling reasons for the rise in vaporizer popularity, but the most obvious one is health related. We all know about the dangers of smoking tobacco, and the prevailing school of thought today is that vaping is far less likely to negatively impact lungs than smoking (not to mention that cannabis is much safer than tobacco).

Other reasons are more likely to be generational. With the popularity of dabbing and concentrates among the younger demographic of cannabis consumers, most likely many of these people want an all-new way of enjoying marijuana. Few would argue that a dab rig—or even a vaporizer pen—is far different than smoking a joint or using a pipe. For many, the reality that “This isn’t your father’s cannabis experience” undoubtedly has its appeal.

A third reason is closely tied to economics and a rapidly emerging market. Cannabis is big business now, and along with that comes a huge influx of new products and technology since the dollars are now there to support it. The introduction of new vaporizer products is at an all-time high right now, and the technology to improve them and make them work well is occurring at an unprecedented rate. A wide variety of portable vaporizers now takes up an entire segment of the legal marijuana products market. They come in all styles, sizes, shapes, and colors, and are popular products in weed subscription boxes.

Yet another reason for vaporizer popularity is discretion. While public approval of cannabis consumption is at an all-time high, there are still laws on the books in legal states limiting the areas where people can use it. With cannabis enthusiasts being the adventurous group they are, most want to use it while on the go—and portable vaporizers definitely deliver on this desire. No matches are needed to use them, they’re usually quite small and discreet, and the vapor that results from their use is much less apparent than smoke because it has far less odor.

A final reason for the rise in portable vaporizer popularity—and possibly the most compelling one of all—is the superior flavor and terpene experience. Nearly all cannabis enthusiasts love the unique flavors of individual strains, and vaporizers allow them to capture the subtle flavors far better than smoking can. Forget old smoking practices like “cornering the bowl” to ensure more than one person can actually taste a strain. Vaporizers have that covered, and a few people are guaranteed a flavor-filled cannabis experience. There’s no doubt about it. Portable vaporizers are here to stay.

When using a flower vaporizer, one particular piece of equipment is essential: a good grinder. Finely ground flower will maximize the release of fragrant terpenes. Using a grinder will also increase the quality of the vapor itself. Thick, copious amounts of vapor will result when using a grinder as opposed to merely using hand-ground flower.

As previously mentioned, vaporizers come in many styles. The table-top variety works particularly well for groups of people who remain in a fixed area. The Volcano is a fantastic product that produces quality vapor for a circle of friends, but it’s not terribly practical for people on the go. That’s where portable versions come into play.

The remainder of this article will focus on a specific segment of vaporizers: the portable, dry-flower vaporizers. There are a wide variety on the market, and many are quite good. We’ll focus on a handful of brands from the “crème de la crème” category. They may be a bit more expensive, but well worth it for the serious and regular cannabis consumer. Expect to pay $200-$300 for most of the elite vaporizers. This is a significant investment, so make a careful decision.

Without identifying a top pick as the best, the following vaporizer brands are all worthy of your attention. Some use high-tech features like phone apps to control temperature levels. The companies that produce these vaporizers have invested a lot on the R&D side to remain relevant in this increasingly competitive market.

The Firefly 2 is a very popular vaporizer that has a dedicated following of fans who will accept nothing less. As its name implies, this is the second vaporizer released by the company, and the design remains sleek and discreet, while producing top-drawer vapor from either dry flower or hash oil. The Firefly 2 has three temperature settings for flower vaping and one for concentrates. Multiple settings are the norm for the best vaporizer brands, and they control the flavor and richness of the vapor produced.

Firefly vapor quality rivals the best on the market, and it only takes a few seconds between packing the chamber with flower and taking your first pull. A couple of the drawbacks of the Firefly 2 is the small flower chamber and hot operating temperature. Expect a shorter vaping session and hotter vapor as a result—which may be a minor issue if vaping with a group of friends. These drawbacks are relatively minor considerations when you consider the overall construction, vapor quality and popularity of the Firefly 2, so this model is definitely worthy of consideration. Its dedicated legion of fans speaks volumes about its overall quality.

The Pax 3 is another winner that satisfies a discriminating and dedicated following of users. This is the sleekest and one of the smallest portable vaporizer designs on the market, and many people would argue that it’s the most attractive and best overall. When improving on the Pax 2 for its latest design, the Pax crew came up with some notable improvements (in defense of the Pax 2, it’s a fine dry flower vaporizer in its own right and is still available and in wide use). The Pax 3 looks identical to the Pax 2, but is 3 grams heavier.

The surface metal of the Pax 2 is brushed aluminum, which changed to a polished surface for the Pax 3. This seems like a questionable change, because the Pax 3 is more susceptible to collecting fingerprints and scratches. This is the only negative change on the Pax 3. It comes with a special concentrate insert that works quite well but is susceptible to breakage after heavy use (replacements are available online). Other areas of improvement for the Pax 3 is longer battery life and a quicker heat-up time (15 seconds as opposed to 45 seconds for the Pax 2).

The Pax 3 also has a useful vibration feature that the Pax 2 lacks. Once fully heated to a pre-set level (four heat level options), the unit vibrates, which is very handy if it’s in your pocket or hand. The Pax 2 requires a visual inspection to ensure it has reached its desired heat level. Give the Pax 3 serious consideration if you decide to take the plunge into portable vaporizers.

The DaVinci IQ is another leading contender in the top tier of vaporizers. Among the vaporizers produced by DaVinci, this is the sleekest, smallest, and most advanced model available. It combines a sleek design with rugged features and durable construction. The rechargeable battery is easy to remove and takes three hours to charge, resulting in a unit that withstands heavy use for more than an hour.

The flower chamber is particularly easy to load with finely ground flower, and the vapor quality is very good thanks to the ceramic zirconia air path. A prominent mouthpiece taints the otherwise sleek design, and function trumps beauty when it comes to vaporizers. One minor complaint about the DaVinci IQ is that it tends to run a bit hot—but this is hardly unusual in the world of portable vapes.

Touting itself as “next generation of vaping,” the Ghost MV 1 uses cutting-edge technology to create a formidable vaporizer that can hold its own among an elite and competitive class. Its futuristic appearance may not be the most attractive design, but this product is highly functional and worthy of consideration even among the most discriminating consumers. It feels good in the hand, regardless of its large size, compared to other vaporizers like the Pax 3, but this is a minor tradeoff considering the overall construction and vapor quality of this brand.

The smoothness and vapor quality of the Ghost MV 1—even when using a small quantity of dried flower—is second to none, which is largely due to the advanced vaporizer technology used to create it. The metal alloy body feels good in your hand, and smooth, dense vapor quality sets the Ghost MV 1 apart from many of its competitors. With a futuristic, functional design that delivers quality vapor, what more could you want? Consider the Ghost MV 1 to be a heavyweight in its class of top-tier vaporizers.

The Crafty is a reliable workhorse that offers a good value because it’s priced a bit more competitively than most of the other brands included here. Its vapor quality is excellent. In the looks department, the Crafty won’t win any awards—it looks more mechanical and apparatus-like than most other vaporizers. The Crafty comes from the same company that released the Volcano desktop vaporizer—a veritable favorite among vape fans—so expect the same fine quality. When using the Crafty, the vapor passes through a cooling chamber much like the water chamber of a bong cools off smoke.

The cool vapor is easier on the lungs and contributes to a satisfying vapor experience. On the downside is the Crafty’s size. It’s significantly larger than most of the other premier portable, dry-flower vaporizers, but it’s still small enough to fit in a purse or pocket for vaping on the go. Considering the fine attributes of the Crafty, it should be on the short list of every person considering the purchase of a high-quality portable cannabis vaporizer.