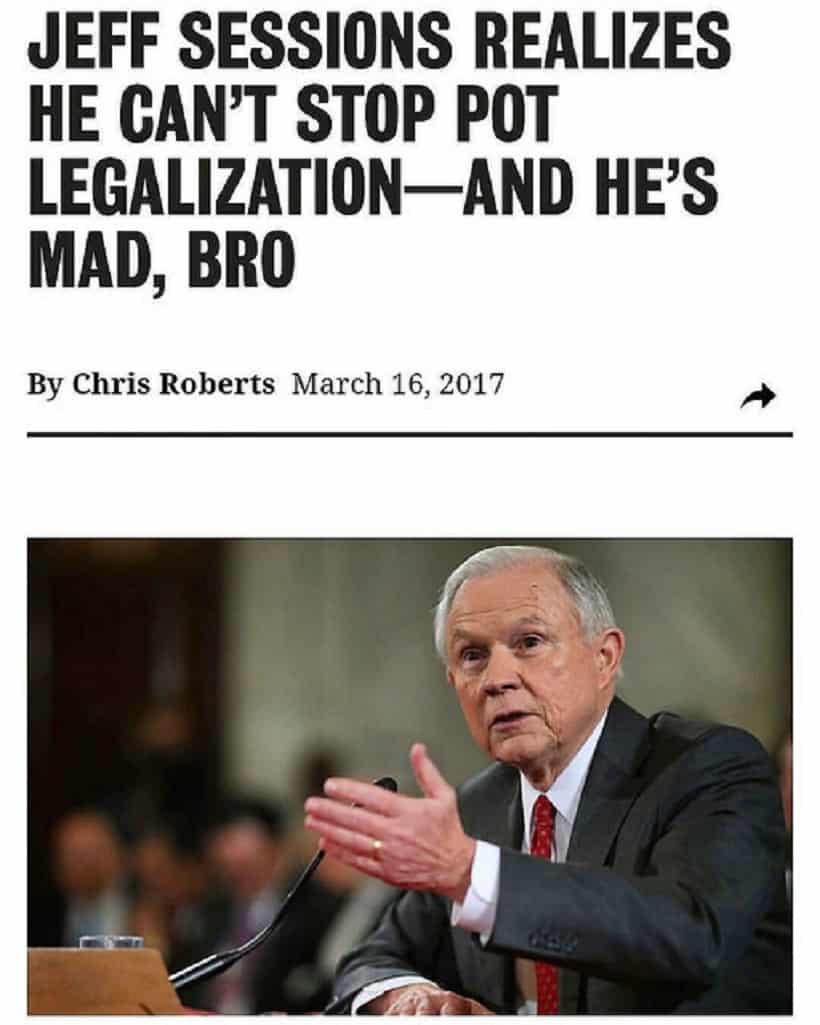 Senator Jeff Sessions was nominated and confirmed to be the Attorney General of the United States. He was chosen by President Donald Trump. Of course, his confirmation hearing was very controversial.  However, the Republicans eventually had their way and he is now officially in office as many advocates wait to see what is going to happen with the legal cannabis programs. Is there a risk to these programs or is there nothing to be concerned about?

A member of the senate asked Jeff Sessions how he would treat legal cannabis programs and his answer was wishy-washy, providing little comfort to patients of medical marijuana as well as state officials. However, Jeff Sessions was clear in his answer about maintaining the federal law, making marijuana distribution and possession a crime enforced by federal law. After the November 2016 election, the marijuana community is sitting in limbo, waiting to see what is going to happen next with the Trump administration and their approach to handling the legal cannabis programs. In the past, Donald Trump professed that he supported the rights of each state as it concerns medical marijuana and their legal cannabis programs, but when it comes to this President, you cannot bet that he will keep his words. Sorry, but the new President has proven that his words do not weigh much. He will say one thing – one day and say something else – another day. In fact, nominating someone like Jeff Sessions says something else since this new Attorney General has been known to be a staunch supporter of the war on drugs, especially saying ‘not so good things' about the idea of legalizing marijuana in the states.

He was asked about the kind of relationship the federal government wanted to have with the legal cannabis programs in each state. His answer was hard to interpret. According to Sessions, he was concerned that since the Congress allowed marijuana distribution and possession to be illegal in each state, then Congress should change the rules in each state, passing a law against it. Of course, Jeff Sessions may be right about Congress having the platform to change legal cannabis programs under the federal law while the Justice Department that Sessions oversees is only allowed to enforce such laws. So, Sessions' statement is not revealing, but could be deemed controversial.

In a practical sense, Sessions still has tremendous legal power since he is the new U.S. Attorney General able to enforce the laws that are created. He would not need any approval from the Congress to appoint federal agents to enter states and make arrests of marijuana growers. Sessions can also freeze bank accounts for cannabis business owners and close down marijuana dispensaries without the Congress' approval.

For now, cannabis advocates are covered by a provision put in place by Congress. It is called the Rohrabacher-Farr Amendment, which prevents prosecutors on the federal level to keep away from legal cannabis programs in each state. This amendment has expired in April 2017 and so, there is no current protection yet established to replace it. Everyone is on edge right now to see what the Congress will do and the actions that Jeff Sessions will be allowed to take, pursuant to Congress' new policies related to the legal cannabis programs. If Jeff Sessions does not target marijuana nationally, it does not offer any permanent protection for the cannabis community. Why? Well, he could sign the initiatives of federal prosecutors that want to crackdown on the state's legal cannabis programs.

It is safe to say that cannabis advocates need to stay on top of all this. Jeff Sessions has condemned marijuana in the past. One time, he also joked about liking the Ku Klux Klan until he found out that the members smoked pot. So, do not kid yourself. Sessions not one to depend on to protect legal cannabis programs. People in the cannabis community may want to make their concerns known to Congress so that the ruling will be in the best interest of the states.

If you want to learn more about marijuana and the programs in each state, go to the Cannabis Training University, the leader in cannabis college courses.