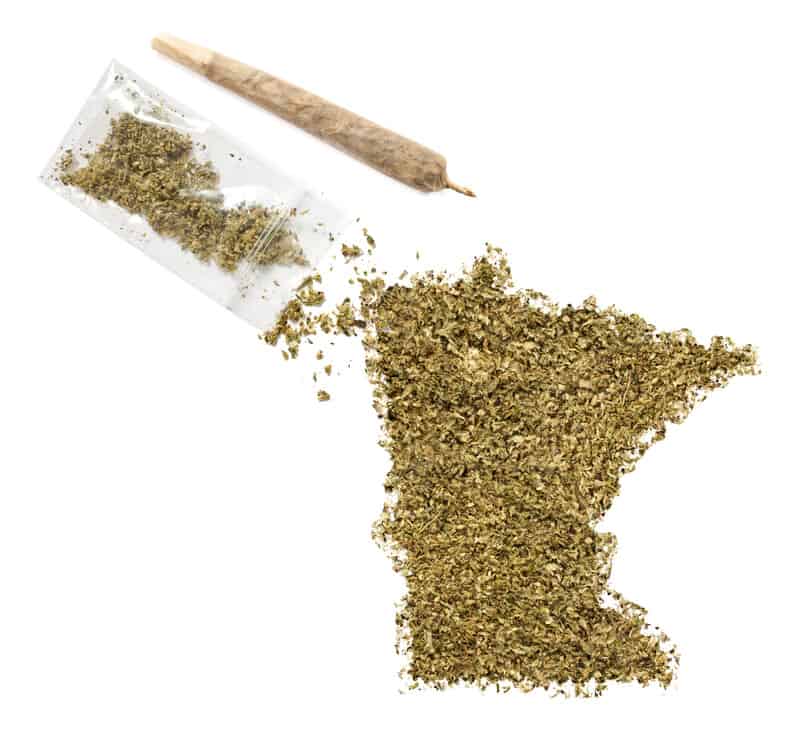 Minnesota marijuana legalization took a huge step in May of 2021. The medical marijuana program in Minnesota now  allows dried flower which was not permitted in the past. But, recreational weed legalization is not going to happen anytime soon as it will not pass the state senate.

Possession laws in the state are already some of the most relaxed in the country for a state without legal recreational marijuana. The economic impacts that other states have witnessed due to full legalization have been immense in the cases of California and Colorado.

Minnesota marijuana legalization is something that should be widely discussed due to its impact on society. The benefits widely outweigh the negative aspects of legal cannabis with data to prove this fact. Opponents of legalization in congress usually have lobbyists that help contribute to their campaigns from various industry involved with them.

How Other States Have Been Impacted By Full Legalization

States that have completely legalized marijuana have seen a number of benefits. The worry was that teenagers would have the drug readily available while states like Colorado have seen a decrease in teenager marijuana usage. The tax money that has been generated by both citizens and tourists has been immense.

A number of states have legalized marijuana fully with caveats that a certain percentage of tax money needs to go to schools. For states with a poor public school system, this could be exactly what is needed as an influx of cash could help immensely.

States like Florida could benefit as its school regularly rank in the top 5 worst in the US.

Minnesota marijuana legalization is headed in the right direction but will still be some time until it's fully legal.

Possession laws in Minnesota are so reasonable that most would be surprised. The truth is that you can have up to 1.5 ounces or around 42 grams of marijuana and be fined for this. This is for a personal amount which should be enough for people not selling marijuana on the side. A $200 fine is worth it when you consider this is a felony in other states with strict marijuana laws.

Even heavy smokers do not need to be carrying more than an ounce on them at a time. There is no misdemeanor possession so anything over 42 grams will be considered a felony with a potential sentence of 5 years if you have less than 22 pounds.

Having over 22 pounds is not for personal use as you could smoke for well over a year on this amount for heavy users. Even if you try to prove you smoke this much, you need to know it is against the law even if you have a few plants as it will be the weight of the plants.

There are potential cases that will be dropped for a first-time offender. Most states try to do this as a drug charge can hinder employment opportunities in the future.

Where To Get Weed In Minnesota?

Minnesota marijuana legalization has led to a number of questions about where to procure marijuana. Going to a dispensary is the best course of action if you are a medical patient. There now are a number of new products due to flower being available.

Much like other states, Minnesota charges by the product or per gram when it comes to medical marijuana. The tax rate is $3.50 per gram currently which can be over $20 when buying a quarter ounce of flower. The black market tends to thrive as taxes are not enforced leading to lower prices for smaller amounts of flower.

Once states figure out the perfect tax rate to use to see a decline in the black market, this will progress. Until then, people that have medical cards might just have a black market dealer then use dispensary containers to carry the product. There are enhanced penalties for having medical containers without any form of proof you can legally possess it.

Cultivation of marijuana is illegal even if you have a medical marijuana prescription. The only legal growers are those licensed by the state to grow commercially. There are a number of fees and hoops to jump through in order to be licensed in most states.

Legal grows can cost up to 6 figures to do in the legal manner as some states are using their marijuana programs as money grabs. The immense costs have led to the black market staying quite healthy as not everyone can qualify for a growing license.

If you do decide that growing marijuana is something that you’d like to do professionally, you are going to have to learn from a professional. Minnesota legal weed laws that were passed in May of 2021 make the future of cannabis in the state look very bright.

Minnesota marijuana growing laws are different as you will be charged by the weight of the flower you have rather than the number of plants. There are intensified punishments in some states for manufacturing or cultivating a controlled substance.

Cannabis Training University can allow you to grow the best marijuana of your life. As Minnesota pot laws start to relax, you might find yourself able to grow a cannabis plant for personal consumption. Our faculty has decades of experience when it comes to growing and working in cannabis. Working at the ground level of cannabis in a state can allow you to have massive commercial success.

Minnesota has already made steps towards full legalization with decriminalization of up to 42.5 grams. Even growing a single plant with a low yield that is under this amount is still decriminalized