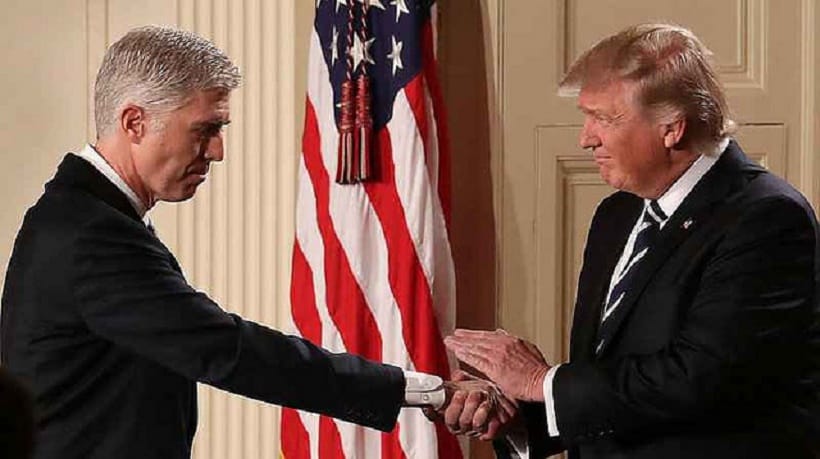 The selection, nomination and appointment of Neil Gorsuch has been nothing short of volatile in the Congress. Of course, since it takes sixty votes to get a confirmation and the Democrats refused to jump on board due to the disrespect that Democrats from Congress about President Obama’s previous nomination. He was not even given a hearing. So what does all this have to do with medical cannabis, you may ask? Well, read on to see how Neil Gorsuch, who was confirmed and appointed to the Supreme Court views medical cannabis.

February 1 2017 was the day that President Trump instructed the Majority Leader of the Senate, Mitch McConnell to just make the necessary decision to severe the gridlock to confirm Gorsuch. It has been a fight between Democrats and Republicans since Obama’s appointee Merrick Garland was held at bay by the ruling Congress. There was no way that the Democrats were going to agree because they felt that the seat was stolen from Garland by the Republicans. Aside from having made some controversial decisions in his legal profession, many Democrats and marijuana enthusiasts and proponents want to know his views on medical cannabis.

Right now, there is not much news on the views that Neil Gorsuch has taken in respect to medical cannabis. As it stands, the media have been fervently digging through past statements made by Gorsuch to find out what his views and opinions were. They have also looking at past legal decisions that he may have made as it pertained to marijuana. So far, it has been concluded that like Trump, the new Supreme Court appointee, Neil Gorsuch does not have much to glean from with regards to medical cannabis. There is not much in his legal record to use as surety to how he would deal with issues related to medical cannabis.

Looking at the Cases

Therefore, we cannot read tea leaves, but we can look at what he did while he was working on the tenth Circuit Court. He was able to hear a small number of cases that involved medical cannabis. Most of the cases did peripherally relate only to the marijuana plant itself and not to medical marijuana in general. Let’s look at one of the cases.

Gorsuch had written an opinion in 2015 that forced a medical cannabis shop in Colorado to unveil or disclose its business taxes to the Internal Revenue Service (IRS). This medical marijuana dispensary had deducted business taxes that were not allowed by the IRS due to the fact that the federal government still thinks that marijuana is illegal. The IRS wanted the dispensary to disclose or reveal its business under the hospices or direction of the court. However, the dispensary owner pleaded the Fifth Amendment in order to prevent self-incrimination. In the opinion written by Gorsuch, it showed sympathy for the dispensary owner. It could have been that Gorsuch lived in a legal cannabis state (Colorado). He thought that the federal government was sending mixed messages about medical cannabis distribution once it became legal in the states. He also thought that even though state prosecutors may overlook what the federal government thought of as crime in the state of Colorado, the IRS would not do so.

From this one case, it may be safe to conclude that Neil Gorsuch’s view on medical cannabis could be sympathetic on average. If you want to know more about medical cannabis, go to the Cannabis Training University today.