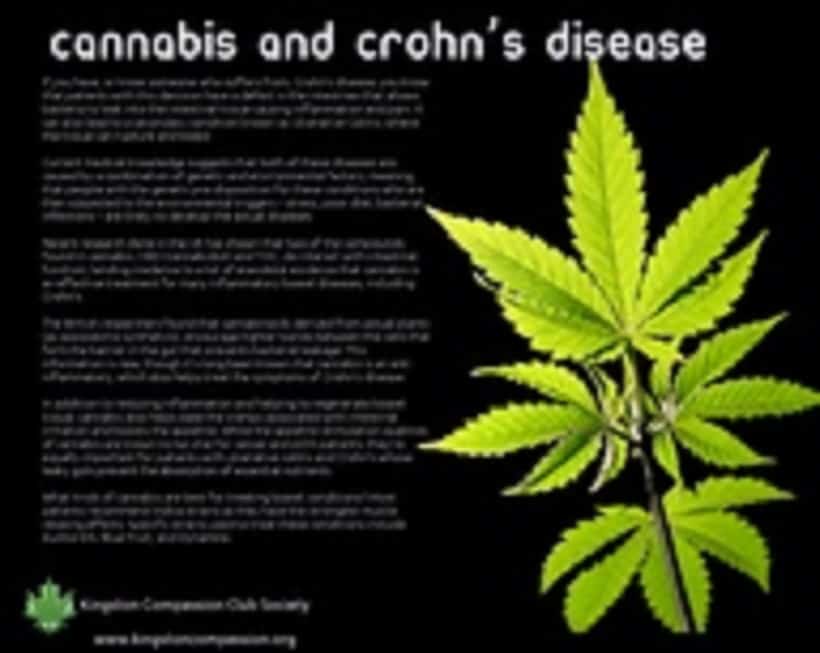 There are many people that have ulcerative colitis or what is popularly known as Crohn's disease. Many of these people do not know what to do about it other than the traditional form of medication, which in some cases does not work. Medical marijuana has been proven to manage the symptoms of Crohn's disease and other medical conditions.

Most western doctors do not understand or believe in the benefits of medical marijuana and so if you are going to ask for your doctor's input regarding this topic, you may get a negative answer.

First of all, marijuana is not harmful, even though, it is categorized as a ‘dangerous drug' by the federal government. Therefore, it will not do any harm if you, at least, try to see how it can benefit your Crohn's disease. Whether it is indica or sativa strain, you will definitely benefit from the cannabinoids found in each strain. You do not have to use medical marijuana strains with high THC level, if you are concerned about getting high. There are many cannabis strains that have more CBD content than THC content.

CBD is effective in healing the human body. We already have endocannabinoid receptors in the body and so, adding CBD content to the mix will only serve to improve our gastrointestinal tract and other areas of the body on a cellular level. In so doing, pain and inflammation will be modulated in a substantial way. This gives room for improved health across the board.

The eondocannabinoid system in the body molds with the CBD content introduced into the body to modify pain. The receptors latch on to the CBD content to regulate pain in the same way that responsible use of opioids do. When THC is present in the medical marijuana strain, it also imitates cannabinoids and its effect on the human body. THC also has the capacity to engage with endocannabinoids receptors in the body.

There are studies done that indicate the endocannabinoid system is usually involved with all immune functions in the body. It is also evident that the elements of the endocannabinoid system is housed in the gastrointestinal tract wall.  This makes it easier for medical marijuana to work inside the body when it is introduced. Therefore, it is not unreasonable to have the assumption that medical marijuana will affect the inflammatory procedures inside the body and especially inside the gut. The studies done on rats show that CBD helps to reduce inflammation from the cells and tissues involved in medical conditions such as Crohn's disease. Medical marijuana is said to be safe to treat many gastrointestinal conditions such as anorexia, vomiting and diarrhea.

It is obvious that medical marijuana is illegal in many states and in many places around the world. But that is changing rapidly. In the meantime, academic research is limited, but there are some in the medical community that are able to legally carry out studies and research. For that reason, progress has been made to discover the true benefits of CBD and cannabinoids.

In fact, there are several states that have approved medical marijuana laws to make it easier for cannabis patients to get help with their medical conditions. So, the situation is clearly evolving and medical marijuana patients should feel hopeful to have more access to the marijuana plant.

In 2013, researchers in Israel conducted their own research on Crohn's disease and the effect of medical marijuana. The results have been encouraging. The subjects that failed in responding to pharmaceutical drugs were given medical marijuana and the results were the opposite. More than fifty percent of the subjects accomplished full remission of their Crohn's disease. This, in itself, is hope for those who have yet to try medical marijuana as a viable option. If you want to know more about this topic, go to the Cannabis Training University now.