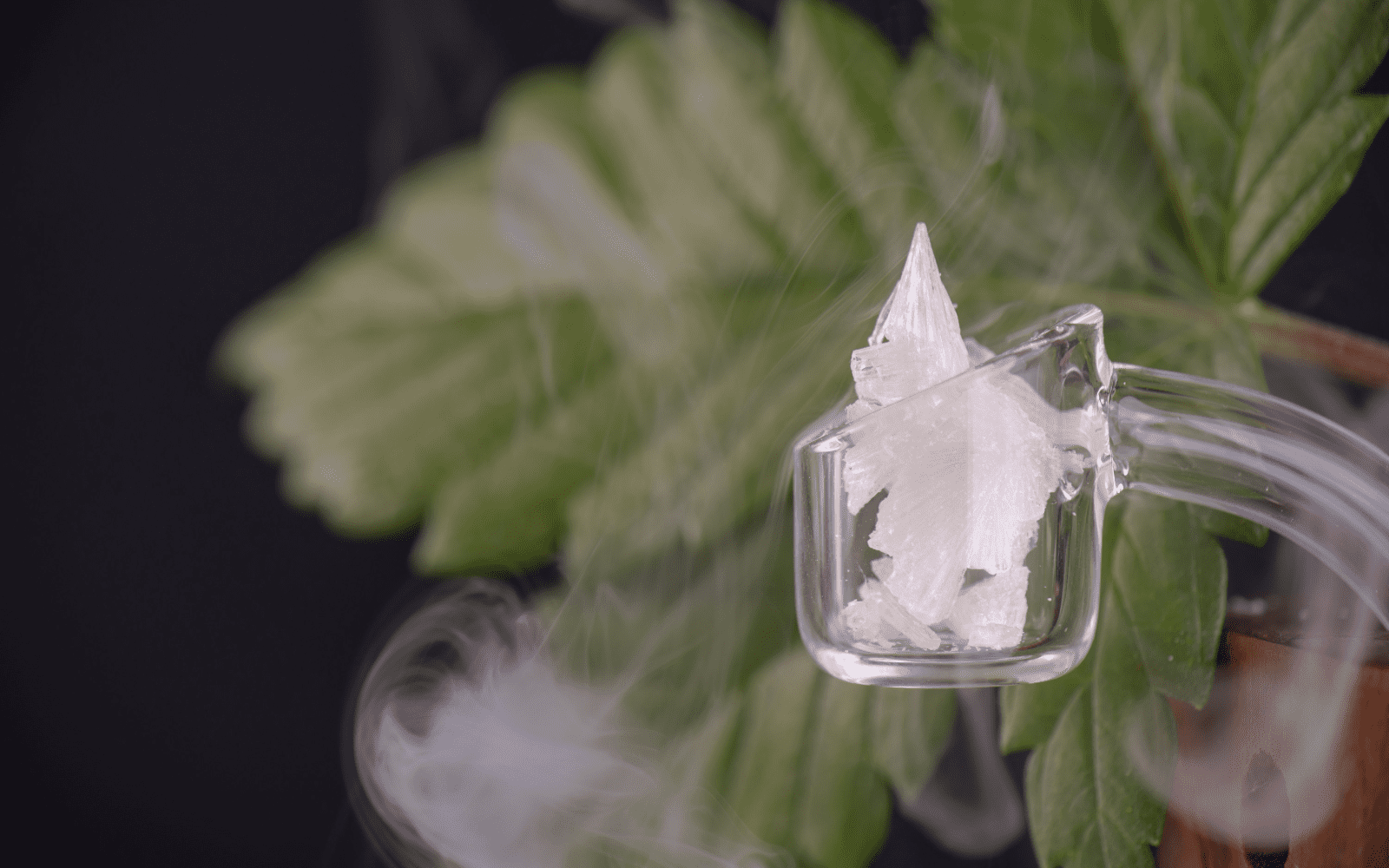 In today’s cannabis concentrate market, manufacturers are employing innovative extraction and post-processing techniques to reach the highest levels of purity and potency possible. The different types of marijuana concentrates range in texture, taste, and effects. Marijuana concentrates are primarily geared toward consumers looking for THC- or CBD-rich products, but new products are quickly gaining steam.

Recently, manufacturers and consumers have been turning to cannabis concentrate isolates that only feature a single cannabinoid, typically tetrahydrocannabinolic acid (THCA) or cannabidiolic acid (CBDA). THCA and CBDA concentrates are pure cannabinoid forms that have a crystalline structure and up to 99.9 percent cannabinoid concentration.

Before you can fully understand what THCA and CBDA crystals are, you need to understand the cannabis plant’s growth cycle. During the flowering cycle, cannabis plants produce cannabigerolic acid (CBGA), the main precursor compound of many major compounds including CBDA, THCA, and cannabichromenic acid (CBCA).

Chemical compounds such as cannabinoids or terpenes are stored in the glandular trichomes found in the marijuana plant’s buds, leaves, and stems. The majority of trichomes are found on the buds and “sugar leaves,” which are small leaves that grow near the buds. As the weed plant matures, THCA, CBDA, and other cannabinoids induce cell death, an important part of the plant’s growth cycle, which promotes “leaf senescence, somatic embryogenesis, and defense against microbial pathogens.”

THCA and CBDA decarboxylate in the presence of light, heat, and oxygen. Decarboxylation chemically alters cannabinoids and converts acidic precursors like THCA and CBDA into their active analogs, in this case, THC and CBD, respectively. Despite decarboxylation, the majority of cannabinoids in mature cannabis plants are not decarboxylated. Mature marijuana plants can contain up to 90 percent THCA of the total THC concentration.

After weed plants are harvested, dried, and cured, further decarboxylation can occur when you store, vaporize, cook, or heat the flower buds. Extraction technicians can isolate cannabis’ THCA and CBDA compounds through various methods that do not involve light, heat, and oxygen. This creates gritty, grainy, and diamond-like cannabis concentrates that don’t contain any other compound but the non-intoxicating THCA or CBDA.

How are Crystalline Cannabis Concentrates Made?

As CBDA and THCA crystals are becoming more and more popular, extraction companies are setting their sights on creating pure and potent concentrates. Most extraction processes occur in a state-certified lab setting with engineer-approved equipment.

Extractors may use solvents such as butane, propane, or carbon dioxide to isolate cannabinoids from marijuana concentrates using a closed-loop extractor. Closed-loop extraction keeps the solvent within the system and recycles it for multiple uses. In order to extract the acid form of cannabinoids without activating them, the extraction must be done at a low temperature.

After the initial extraction is completed, the oil produced will undergo a slow purge with low heat to remove any harmful residual solvents from the final product. Again, to avoid activating the cannabinoids, the purge must be kept at a low temperature. The resulting oil is left alone for a couple of weeks, so terpene oils separate from the cannabinoid crystals. The resulting crystalline structures are THCA and CBDA concentrates.

Effects of THCA and CBDA

Not surprisingly, there isn’t much research on THCA and CBDA interactions in the human body. Most studies are based on THC or CBD-based compounds. Researchers believe that THCA and CBDA do no bind to cannabinoid receptors as THC does. One study published in Neurotoxicology and Teratology found slight activity in CB1 receptors, although researchers believe that these cannabinoid acids don’t directly interact with receptors, but offer numerous health benefits.

A 2011 study published in the Biological and Pharmaceutical Bulletin found that THCA and CBDA have anti-inflammatory characteristics. Researchers evaluated the effects of multiple cannabinoids on prostaglandin production. Cannabinoids inhibit cyclooxygenase enzyme activity, which promotes pain and inflammation.

A 2012 study published in Phytomedicine found that THCA had neuroprotective properties. Researchers studied the effects of THCA, THC, and CBD on mice with a compound used in the research of parkinsonism. Researchers discovered that THC and THCA protected neurons against MPP(+) induced cell death.

A 2013 study evaluated the anti-emetic and anti-nausea properties of THCA, which built upon research that indicated that CBDA attenuated induced gaping reactions in mice. Researchers believe that THCA and CBDA may be more potent in reducing nausea than CBD and THC, but more research must be done to confirm these findings.

THCA and CBDA research shows a lot of promise. One study found that two milligrams of THCA taken daily resulted in “90 percent seizure reduction and improved tolerance to temperature fluctuations.” The study also found that a linalool-dominant chemovar improved the efficacy of the compound.

How to Use THCA and CBDA

THCA and CBDA crystals can be heated through a variety of ways including vaporization, dabbing, or cooking. Decarboxylation converts most of the acid into THC or CBD. Dabbing these crystals can deliver a highly potent experience. Some crystals may have terpenes to improve the marijuana concentrate’s flavor and efficacy.

THCA and CBDA crystals are an increasingly popular way to consume cannabinoids. While they may not be for everyone, they can provide medical users with an easy-to-dose concentrate that delivers the effects of a single molecule.

If you are looking for more information on cannabinoids, terpenes, cannabis as a medicine, hemp, CBD, growing cannabis, marijuana extractions, cooking with cannabis, and how to start a cannabis business, enroll online at the leading medical marijuana college today