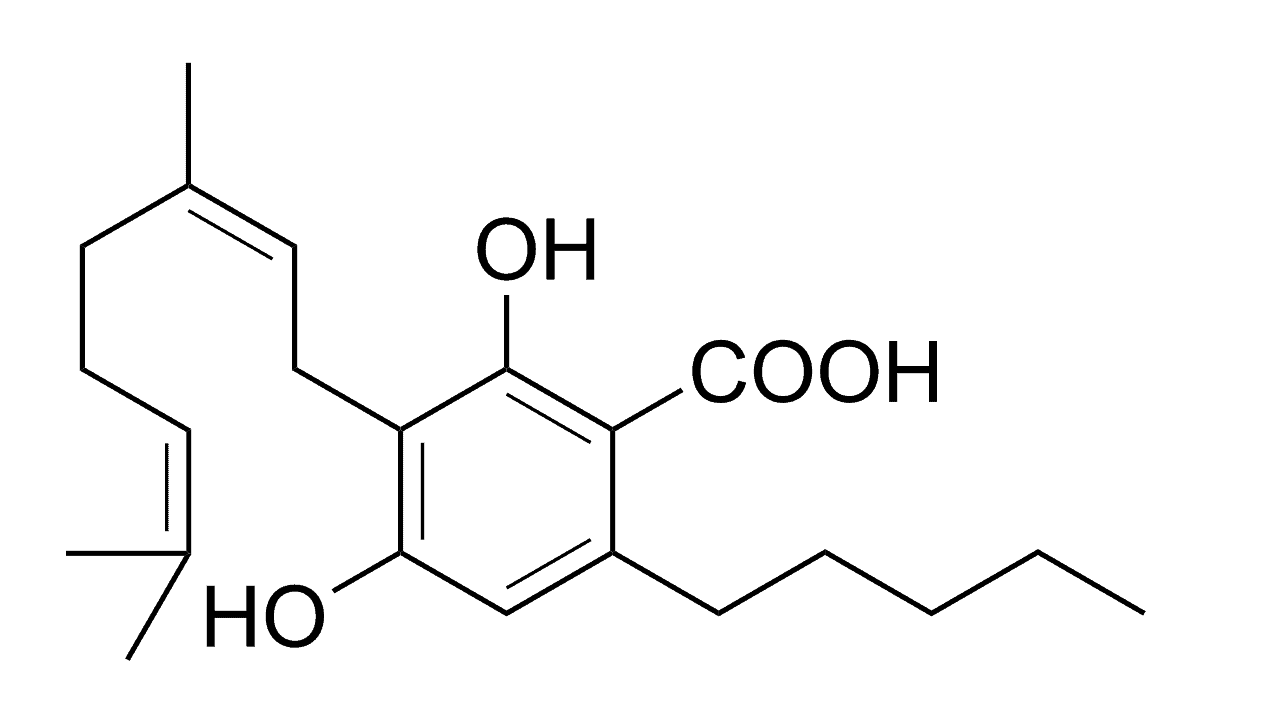 CBGA is abundant in marijuana in its raw form. When exposed to heat the marijuana goes through what is called decarboxylation where the acidic cannabinoids are transformed to their non-acidic forms. In this case CBGA is broken down into CBG or it can be broken down into THCA and CBDA.

It is believed that scientists have been aware about the existence of CBGA from as far as 50 years ago. Japanese researchers are credited with the discovery of CBGA as the precursor of CBG.

Cannabigerolic acid is a conjugate acid of cannabigerolate and it is derived from olivetolic acid. It has a complex structure being a dihydrobenzoic acid, diterpenoid, and a poyketide. It is olivetolic acid with a geranyl group at position three instead of a hydrogen.

Not much research has been done on CBGA. However, from the little research that has been carried out it has emerged that CBGA has a role to play in the following five medical conditions.

The cannabinoid CBGA has been implicated in the treatment of cardiovascular disease, metabolic disorders, colon cancer, inflammatory bowel disease, and diabetes.

A recent study conducted in 2019 showed that CBGA has potential in regulating metabolism. CBGA activates receptors that regulate metabolism and prevent chronic metabolic diseases such as diabetes. This study was conducted in a machine-simulated model and further research in a clinical setting would be required to validate these findings.

As much as a cure for cancer is elusive, CBGA is showing potential in addressing colon cancer which is among the deadliest forms of cancer. One research has shown that CBGA has cytotoxic properties targeted at colon cancer cells. CBGA was also linked to the prevention of GI polyps which eventually develop into cancerous cells.

A study that was carried out in 2013 suggests that CBGA may help to relieve the symptoms of inflammatory bowel disease (IBD). This study was carried out on mice suffering from colitis. The mice were given CBG and observed. CBG was perceived to reduce severity of the colitis by reducing the production of nitric oxide. CBG also reduced oxidizing agents in the small gut. The researchers concluded that CBG was effective in relieving symptoms of IBS in a mouse model.

Recent research suggests that CBGA helps to reduce oxidative stress which leads to diabetic complications and even diabetes – related death.

How Does CBGA Work?

How to Consume CBGA

If you wish to consume CBGA and benefit from  its therapeutic properties you are better off catching it in its raw form before it has undergone decarboxylation. Since exposing marijuana to high temperatures is likely to set off the process of decarboxylation it is necessary to consume the marijuana in its raw state to prevent breaking down the CBGA into CBG, THCA,or CBDA.

CBGA is a legal grey area because it is not explicitly mentioned in cannabis laws. Marijuana is a scheduled drug due to the presence of THC which has psychoactive properties. Since CBGA is non-psychoactive we expect it to fall under the umbrella of other non-psychoactive cannabinoids such as CBD. Since hemp is legal for cultivation, use, and sale under federal law, it would seem that hemp derived CBGA would enjoy similar immunity.

What’s the Difference Between CBGA & CBG?

Cannabinoids found in raw cannabis are usually in an acidic state. CBGA is an acidic cannabinoid that breaks down into CBG, THCA, or CBDA once exposed to heat.

While CBGA is acidic, CBG is not. CBGA is inactive while CBG is active.

CBGA and CBG have similarities because one is the precursor of the other. However, the two have different mechanisms of action in the human body and hence have varying therapeutic potential.

How is CBGA converted into THCA?

Most marijuana strains will have high amounts of CBGA, especially before they have undergone decarboxylation. This is because CBGA is the precursor of most other cannabinoids. You may find that in any strain the levels of the acidic forms of cannabinoids such as CBGA, THCA, and CDA vary. However, CBGA is usually scarce in most marijuana products that have undergone drying and curing. The best chance you might have at enjoying some good CBGA is to grow your own marijuana and prepare it for consumption before decarboxylation begins. This means working with a temperature that does not get beyond 225 degrees Celsius.

This wraps up our comprehensive review of CBGA, the mother of all phytocannabinoids.