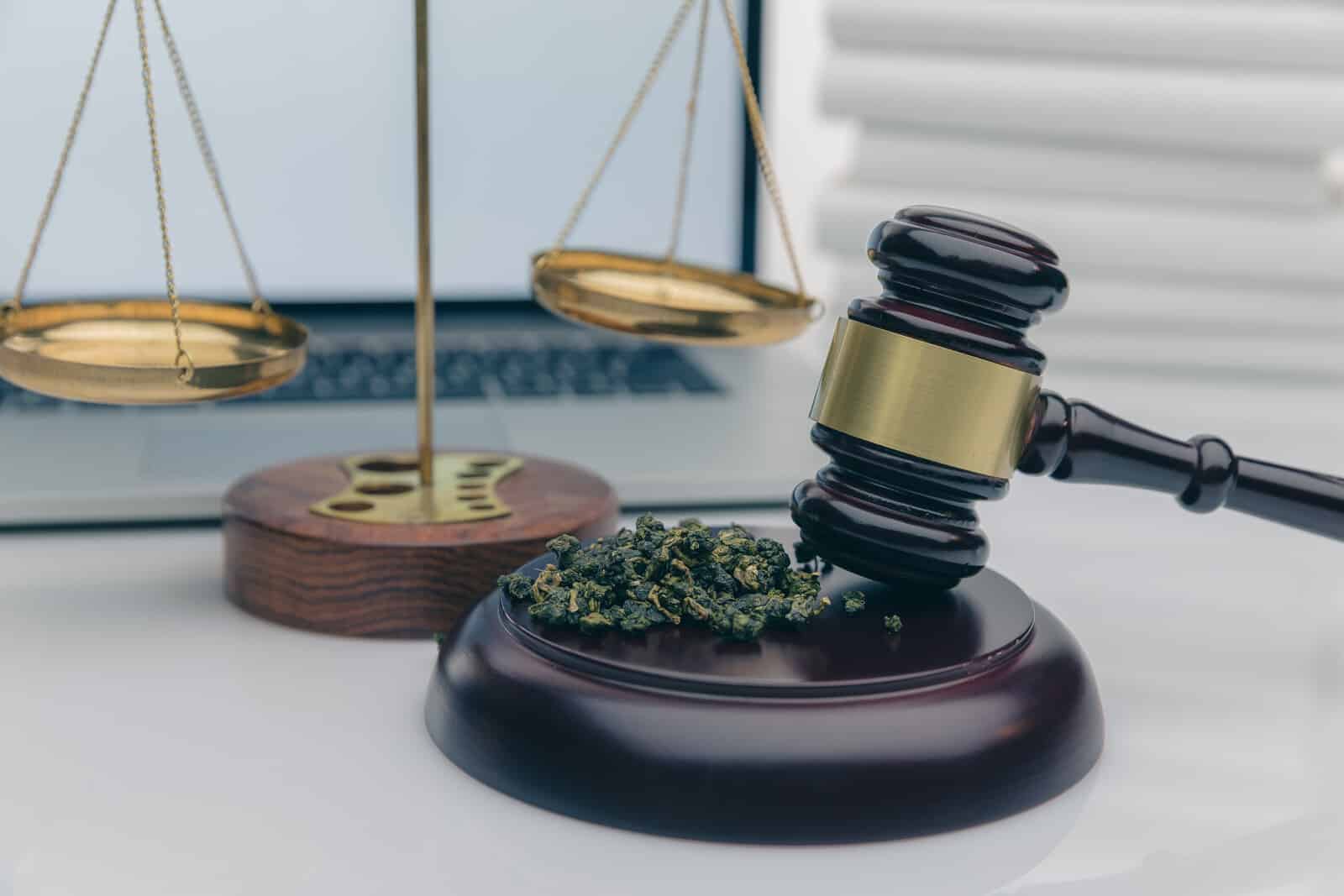 Federal legalization of weed has never been closer. Cannabis prohibition has been the norm for decades, but more than half of U.S. states have passed medical marijuana laws and several have passed adult-use cannabis laws.

Cannabis laws are changing fast. Our federal cannabis legalization guide gives you a snapshot into the current state of the U.S. cannabis market and gives you an insight into what the future holds for the industry.

Currently, cannabis is not legal on a federal level. In fact, cannabis is listed as a Schedule I substance in the Controlled Substances Act of 1970. Schedule I drugs are classified as drugs without any medicinal value and with a high risk for abuse.

Schedule I drugs include:

Now, the federal and state laws can get confusing since some states have legalized cannabis for medical and recreational use while the drug is considered a dangerous substance by the federal government.

As of July 2021, medical cannabis use is legal, with a doctor's recommendation, in 36 states and four out of the five U.S. territories, and the District of Columbia. 12 other states have limits on THC concentration in CBD-rich products. The Rohrabacher-Farr Amendment prevents federal prosecution of people complying with state medical cannabis laws.

Recreational cannabis use is legal in 18 states, the District of Columbia, Guam, and the Northern Mariana Islands. 13 states and the US Virgin Islands have decriminalized cannabis use. In August 2013, the Cole Memorandum provided protection against federal law enforcement in states with legal cannabis, but the memorandum was rescinded by Attorney General Jeff Sessions in January 2018.

While cannabis remains federally illegal, the Food and Drug Administration (FDA) has approved some derivative compounds for medical use. The FDA has approved cannabinoid-based drugs such as Marinol (THC), Cesamet (nabilone), Syndros (THC), and Epidiolex (CBD). The 2018 Farm Bill legalized the production of hemp allowing individuals to purchase hemp-derived CBD products without a prescription. However, hemp laws vary by state.

Which States Have Legalized and Prohibited Cannabis?

Cannabis is legal for medical and recreational use in the following states:

Cannabis is legal for medical use only in the following states:

The following states prohibit cannabis where any possession is unlawful possession of marijuana:

2021 has been a big year for cannabis legislation across states. In 2021, four states have passed adult-use legislation including Connecticut, New York, New Mexico, and Virginia.

In November 2020, a majority of voters voted for former Vice President Joe Biden as their next president over the former president and Republican candidate, Donald Trump. Biden has expressed his support for federal marijuana decriminalization, expungement of past records, and medical cannabis legalization, but has not expressed his support for adult-use legalization.

In the 1980s and 1990s, Biden was a big proponent of enacting punitive anti-drug legislation as a senator. In the past, he has supported laws that enacted federal mandatory minimum sentences for drug trafficking and increased funding for prisons.

Fortunately, his views on cannabis have evolved over the years, although they are not as progressive as many Americans would like.

President Biden holds similar views as adults aged 75 and older. Only 32% of this age group support recreational and medical marijuana use. That is the lowest share for any age category and considerably lower than adults in the next oldest age group, ages 65 to 74, with 63% support for adult-use and medical cannabis.

Based on recent polling from the Pew Research Center, 72% of Democrats and Democrat learners support cannabis legalization for medical and recreational use. An additional 23% believe cannabis should be legal for medical use only.

63% of conservative and moderate Democrats believe cannabis should be legal for medical and recreational use. 82% of liberal Democrats also believe this.

The Cannabis Administration and Opportunity Act would decriminalize cannabis, expunge federal non-violent cannabis convictions, and fund nonprofits that would provide services to those most affected by the War on Drugs.

The bill has not been introduced to Congress and a final version is not expected until later this year. Its fate remains up in the air if they can gain Republican support (which is not likely) and support from President Biden who has supported decriminalization and expungement efforts.

Based on the Pew polling, Republicans are much less supportive of federal pot legalization than Democrats. Only 47% of Republicans and Republican-leaning independents support legal cannabis for medical and recreational use. 40% of Republicans believe it should only be legal for medicinal use.

What Are the Economic Benefits of Legalizing Cannabis?

As one of the fastest-growing industries in the world, cannabis brought a surge of new revenue for states. As a result, a variety of companies in cultivation, retail, manufacturing, and ancillary sectors have seen the tremendous economic benefits of marijuana legalization.

According to a report from the Marijuana Policy Project (MPP), states that have legalized adult-use cannabis have brought in nearly $8 billion in tax revenues since 2014. And, this number doesn't include tax revenue brought in by city taxes.

There's no doubt that the steady stream of tax revenue can significantly fund state programs.

The cannabis industry has created a wealth of employment and income opportunities across states with legal medical and recreational marijuana. Based on Leafly’s latest jobs report, the industry now supports 321,000 full-time cannabis jobs.

That's an increase of over 77,000 jobs from last year. And, it is also double the number of jobs added from 2019 to 2020 which was 33,000 jobs. Even in the midst of a global pandemic and worldwide stay-at-home orders, cannabis industry employment continues to rise.

In fact, a report from New Frontier estimates that federal legalization of marijuana could create 1 million jobs and $105.6 billion dollars in federal tax revenue by 2025. As a result, people would be able to work with cannabis either directly or indirectly in a number of job segments.

Since cannabis is federally illegal, a number of marijuana companies have been unable to list their stocks on U.S. exchanges. As a result, their stocks have been primarily available in Canada and other countries.

When cannabis becomes legal, these companies could list their stocks on U.S. exchanges and allow investors to buy stocks and increase their investments as the industry and company grows.

If cannabis became legal, there would be a lot of financial savings across the board. For instance, federal marijuana enforcement costs the government several billions of dollars per year.

If cannabis were legalized, the cost of law enforcement or marijuana would significantly drop. In addition, there would be a reduction in court cases if marijuana was not a controlled substance.Fewer court cases means fewer incarceration, which would save money.

Finally, legalization would see a reduction in prices on cannabis products. Lower prices for patients would mean that they would be able to continue their medical treatment at a considerably lower price.

When Will Cannabis Be Federally Legal?

Federal legalization of marijuana is inevitable in the U.S., but the only question that remains is when will cannabis become federally legal. Legislators in Congress have recently proposed cannabis-related bills in Congress including the Secure and Fair Enforcement (SAFE) Act and the Marijuana Opportunity Reinvestment and Expungement (MORE) Act.

In July 2021, Senate Majority Leader Chuck Schumer and other Democrats unveiled a proposal to end federal prohibition of cannabis and expunge the records of non-violent marijuana-related offenses.

While the bill Is unlikely to pass, legislators in Congress have supported a number of cannabis-related bills as of late, a clear distinction to the views on cannabis that were more against legalization even just a couple of years ago.

Until 1996, medical cannabis use was prohibited in the U.S., and it took until 2012 to pass the nation's first adult-use laws. In just a span of two decades, a majority of states and adults now support medical and recreational cannabis use more than ever.

On the federal level, however, legislators have hardly pushed the issue forward until recently. Cannabis continues to remain at the most strict narcotics schedule. As a result, many individuals continue to flourish economically while others remain in jail for petty marijuana offenses.

President Biden has already stated his position for medical cannabis legalization and decriminalization. Whether he is likely to change his tune during his presidency remains to be seen, if enough Democrats support legalization alongside several Republicans who can override the expected Republican filibuster on the floor.

Despite cannabis being overwhelmingly popular among adults across all ages, genders, and sometimes even political alliances, legislators in Congress are traditionally more conservative than their constituents.

We may see decriminalization and expungement on a federal level and more states passing medical and adult-use laws before we see a complete reversal in the nation's cannabis prohibition laws. Fortunately, there are many states passing cannabis laws.

Are you interested in learning more about federal cannabis reform efforts and marijuana federal legalization? Enrollment at Cannabis Training University provides students with up-to-date course content on the latest laws, research, and technologies in the industry.

Stay up-to-date with the latest marijuana laws by enrolling in CTU today!