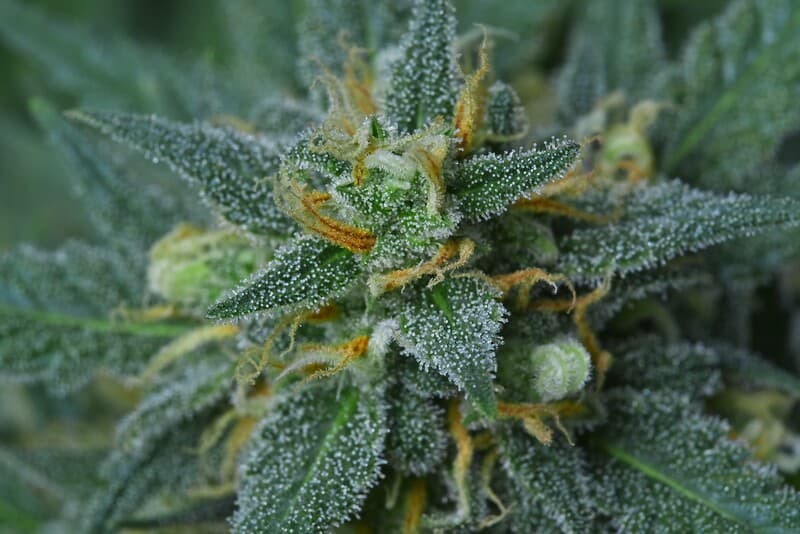 The Blackwater OG strain might sound a bit intimidating due to the namesake of Blackwater being one of the most powerful private security companies on earth. Marijuana was a quite secretive industry like that of Blackwater’s. The truth is that this strain is not going to be too potent for experienced smokers even if the name might indicate this will be one of the most potent strains on the market.

The following will delve into the information you will need to know about smoking and growing the Blackwater OG marijuana strain.

Is Blackwater OG strain an Indica or Sativa?

Blackwater OG is a 90/10 Indica-dominant of Mendocino Purps and SFV OG. Keep your phone around as you will likely get the munchies and order some food. Couch-lock will be an issue so make sure your agenda is cleared for the day before toking on this strain.

Mendocino Purps is going to be pretty potent at around 22 percent THC. The slightly Sativa-dominant hybrid has a flavor of berry, caramel, and coffee. If you want to improve your mood while simultaneously relaxing, this might be the perfect strain for you.

SFV OG will have around 22 percent THC and is a great strain if you love couch-lock. The strain will not have a creeping high much like others. Medical patients have stated that they have found relief from stress and chronic pain with this strain.

Blackwater will be able to be grown indoors or outdoors. Indoors you can expect around an ounce per square foot but the yield per plant depends on the room you have to grow. Outdoors you will see up to 400 grams per plant which is quite healthy.

The yield that you see will depend on so many factors that your growing expertise is not the only one. Seed genetics can drive yields up or down depending on their quality. You want plants with a lineage that are durable and have high yields.

The flowering phase of Blackwater OG lasts anywhere from 10 to 11 weeks. The flowering time is quite long when you consider the yields which are decent but not overly large. You should expect extremely dark nugs with orange hairs. There is also going to be trichomes that frost the buds but don’t expect each nug to be very dense.

Figuring out what strains to grow might take a bit of trial and error over the course of a few growing seasons. You should always start with easier strains to grow with large yields so a few mistakes can be made. Strains with small yields can lead to little to no yield after a single mistake or two.

Blackwater OG is very potent at 19 to 22 percent THC. Daily smokers should not have an issue smoking this strain. Beginners might have a bit of trouble but they will likely fall asleep after toking on this almost pure Indica strain.

The flavor of Blackwater OG is of grape and fruit. The aroma is of earth and grape. The terpenes in this strain include Carene, Caryophyllene, and Myrcene.

Carene has a flavor of wood and the aroma of citrus. The benefits include improving memory in a number of studies that have been conducted.

Caryophyllene is a great terpene if you want to reduce pain and inflammation. The flavor is likened to black pepper by a number of consumers.

Myrcene will have a familiar flavor of earth. The terpene is great for mental and physical relaxation which is why it is great for treating sleep disorders. 9 Pound Hammer and Grape Ape are two potent strains that contain Myrcene.

Price Of The Blackwater OG Strain

Blackwater OG should not be too expensive at around $42 to $48 per 1/8th of an ounce. The full ounce will cost less per gram at $260 to $270. Taxes along with the dispensary that you are shopping at will impact the overall price which is something to keep in mind.

You are not going to be able to find Blackwater OG seeds or any seeds in a legal manner online. You cannot have marijuana seeds mailed due to a federal law prohibiting this action. The truth is that some seed banks will send the seeds leaving the risk with their customer.

Autoflowering seeds might be the best option for a first-time grower. You will not have to change the light cycles in order to get the flowering phase going. You can just water the plant while providing consistent light then get ready to harvest after a period of time.

Marijuana has changed the lives of people that were once suffering daily. The programs have expanded across the country with states instituting their versions of medical marijuana. Blackwater OG can help with the following medical conditions:

The cannabinoid content in this strain is quite diverse although the CBD comes in at right around 1 percent. Take the time to read lab results as you might find that a certain terpene or cannabinoid is linked with relief. You always want lab-tested products so you know exactly what you are consuming.

Blackwater OG is a strain that you definitely have to try if you love the classic Indica effects. Don’t let the name intimidate you as it won’t be overly potent. Take the time to research any strain you decide to purchase or cultivate.

Blackwater OG is one of the coolest names for a strain on the market. What is a strain that you thought had the best name you’ve seen in recent memory?