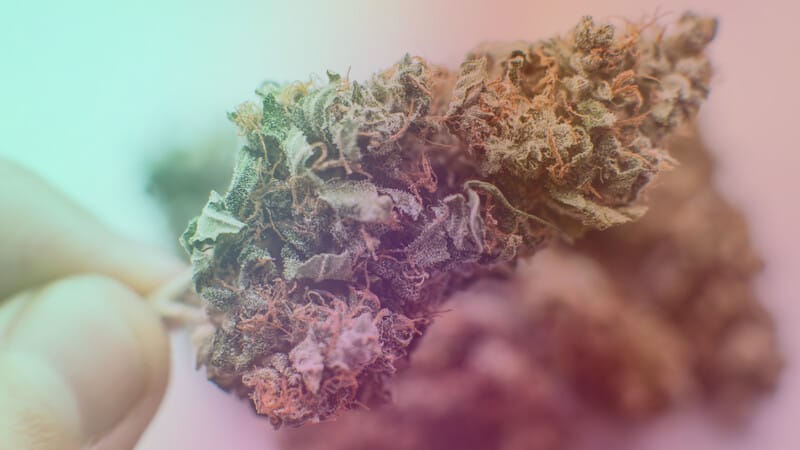 Marijuana genetics can be a funny thing, as you’ll see in this Golden Goat strain review. Sometimes, breeders will put in years to breed the right phenotypes of established cannabis strains to produce a high-quality child strain.

Other times, the wind blows a funny way and there is accidental pollination that ends up creating a high-quality child strain. That’s exactly the case with this Golden Goat ganja.

Here at CTU, we don’t discriminate against accidents if they end up producing potent marijuana. So, we figured it was only right to review the Golden Goat strain!

It’s a breezy evening in fall in Kansas. You are growing some Island Sweet Skunk and are exciting for the upcoming harvest. You find that a nearby male Hawaiian/Romulan hybrid has pollinated your crop. Oops!

Instead of tossing the seeds, you invest the time to grow them and use the strongest of the bunch to create a new strain. It somehow smells sweet, sour, and spicy at the same time.

So, why not name your accidental strain Golden Goat?!

This is the exact story behind the invention of Golden Goat cannabis.

It leans heavily towards sativa and produces an energizing vibe to your high while creeping into a pain-reducing relaxed state later on.

The irony of creating an accidental strain is that it has been so widely praised for its potency and unique essence it has been purposely used as a parent to create some other popular marijuana strains.

Golden Pineapple is a mix of Golden Goat and Pineapple Kush leaning more towards the tropical influence and social energy that Golden Goat can provide.

Golden Ticket, also known as Mr. Dank, is a mix of Golden Goat and Face Off OG created by Archive Seeds Bank. It creates a more balanced high between the body and mind while still providing an energy boost.

If you want to get your hands on the genetics of Golden Goat it is only available as a clone for prospective growers.

Golden Goat produces a yield like a typical sativa with tall plants and medium-sized dense nugs rich with amber trichomes. It can be grown indoors but is best suited for outdoor operations due to its reaching height.

It can produce upwards of 3-6 ounces per square feet of plant, making it a good yielding variety. The buds are known to have hues of red and pink throughout if exposed to low temperatures during the vegetative state. Otherwise, they’ll appear bright green.

While the strain produces the best aroma and flavor during earlier periods of maturity, it is typically harvested when the trichomes turn amber to increase the potency of the body-high experience.

Golden Goat has a long flowering time like other sativa-dominant marijuana strains. It takes around 70-80 days for the flowering period.

The indoor flowering time may drop lower to around 56 days, but as mentioned, it’s better suited for outdoor growing.

Golden Goat weed is known to reach THC levels up to 23%. However, the average THC level is 19%, which is still potent. In addition to this high level of THC, it offers a CBD content of 1%, making it a good choice for pain relief and other symptoms that are relieved with CBD medicine.

The high produces energy and a head-high early on while moving towards a pain-relieving body high later on, probably due to the CBD content.

This strain may be found lower in THC if the trichomes are allowed to turn fully amber, which can be more useful for medicinal purposes. Those looking to use Golden Goat as medicine should look for the amber while recreational users may enjoy the milky-white trichome coating better for the higher levels of THC.

As mentioned, Golden Goat is somehow sweet, spicy, and sour all at the same time. It is considered a mash-up of incompatible flavors by some that are reminiscent of the essence of a goat. A rumor is going around that the Goat phrase in the name is due to this pungency.

The aroma and flavor of this strain are intense, which may turn those users off.

But, others enjoy the depth of flavor and aroma with the Golden Goat strain. It provides an earthy aroma filled with tropical fruit essence with a hint of citrusy sourness.

The flavor is remarkably similar to the aroma with a bit more spice. The smoke is intense and can easily cause a coughing-fit for those who don’t take it easy in the inhale.

The terpene profile of Golden Goat is rich in Myrcene, Caryophyllene, and Pinene, which are typically reserved for indica-dominant strains. This only adds to the unique essence of Golden Goat since the high is strongly influenced by the sativa genetics.

This uplifting pot strain is good for the following conditions:

While the high levels of THC may produce a sleepy effect, the energizing effects typically outweigh the THC high that sends some to sleep.

It can be a great medicinal strain to use early in the day for those who need a little pain relief and a pick-me-up. Creatives will find great use from Golden Goat with increased focus, creativity, and energy levels.

The Golden Goat ganja may have come about by accident, but this strain would have been created at some point on purpose! It produces a unique experience for cannabis users, recreational and medicinal alike.

Interested in the complexities of the cannabis industry? CTU is the place to be to ensure you have the latest news, in-depth information on the best weed strains, and training for professionals, unlike any other company!