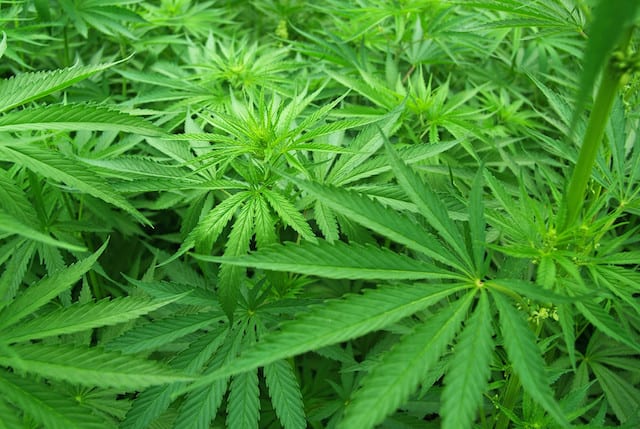 Decades of cannabis prohibition have lumped together the intoxicating cannabis plant with the hemp plant used for industrial purposes. Let’s go into detail about the difference between hemp and weed.

Under U.S. law, hemp is classified as a cannabis plant with under 0.3% tetrahydrocannabinol (THC) by dry weight. If a plant contains above the THC limit, it is considered cannabis, which is prohibited under the law. Hemp’s extremely low THC level doesn’t cause intoxication when consumed.

In 1979, research scientist Ernest Small suggested differentiating hemp with the arbitrary 0.3% rule since there is no taxonomic difference between the plants. Today, the THC cut-off limit stands. Around the world, the THC limit of hemp varies.

Now, you may be wondering if there is a difference between industrial hemp vs hemp. Both terms are interchangeable, but industrial hemp is a more specific term that refers to its many industrial applications.

Cannabis, also known as marijuana or weed, refers to the intoxicating plant with a higher level of THC ranging from 10 to 30%, depending on genetics and environmental conditions.

The History of Cannabis and Hemp

In reality, hemp and marijuana are both the same plant, part of the Cannabaceae family. In the early 20th century, the United States waged a war on drugs that villainized cannabis use.

At the time, Mexican immigrants were bringing over the intoxicating plant, which fueled racist ideas.

Cannabis, the scientific term for the plant, was consciously replaced with “marijuana,” to associate its use with Mexicans, and negative stereotypes associated with this demographic.

Since then, marijuana has been declared immoral, dangerous, illegal, and potentially deadly.

In the 1930s, the myth of the dangerous cannabis plant became mainstream, which led to the prohibition of the drug. Up until then, cannabis was widely sold in U.S. pharmacies as tinctures.

In the midst of the legal changes, the U.S. made any form of cannabis (including hemp) illegal.

Hemp, however, has had a long history of industrial use that’s quickly decreased with prohibition. In fact, hemp is believed to be the earliest domesticated crop that was used by ancient civilizations.

It wasn’t until 2018 when the U.S. decided to legalize industrial hemp production with the 2018 Farm Bill and differentiate between cannabis and hemp.

Physical Differences of Hemp vs Weed

Beyond the chemical composition differences, there are physical differences between hemp and weed. Since both are used for different purposes, generally, they tend to grow in starkly different manners resulting in different plant structures.

Of course, cannabis plants can grow very tall, but their bushy appearance remains. Despite their differences, law enforcement and others unfamiliar with the plants may confuse the two, especially since they both emit a similar smell.

Cultivation Differences of Hemp vs Weed

Because of their different uses and physical appearance, hemp and marijuana plants require different cultivation methods.

Hemp and cannabis both have similar and different uses, depending on its chemical composition.

Hemp, in particular, is a popular and sustainable alternative to a variety of plants since it grows at a quick rate. For instance, growing hemp for paper is much more sustainable than growing trees for the same purpose.

Cannabis and hemp laws vary by country and municipality. In the U.S., some states allow the medicinal and recreational use of weed. Others may only allow medical use.

In a few states, the medical and recreational use of cannabis are both illegal.

CBD In Hemp and Cannabis

Cannabidiol (CBD) has slowly but surely gained acceptance and popularity ever since hemp production was legalized. Unlike THC, CBD does not produce a high. However, its use can produce a variety of health benefits without the intoxication.

CBD can be found in both hemp and cannabis in different concentrations. However, the only federally legal source of CBD is hemp that contains under 0.3% THC. Cannabis flower can contain higher-than-average CBD and low THC, but it is not federally legal.

Now that you understand the difference between hemp vs weed, you can dive deeper into the science of cannabis. Understanding the plant’s chemical compounds and effects can help you find the relief you need.

Get 1-year access to tons of educational resources including e-books, videos, quizzes, and so much more. Empower yourself with up-to-date cannabis knowledge with CTU.