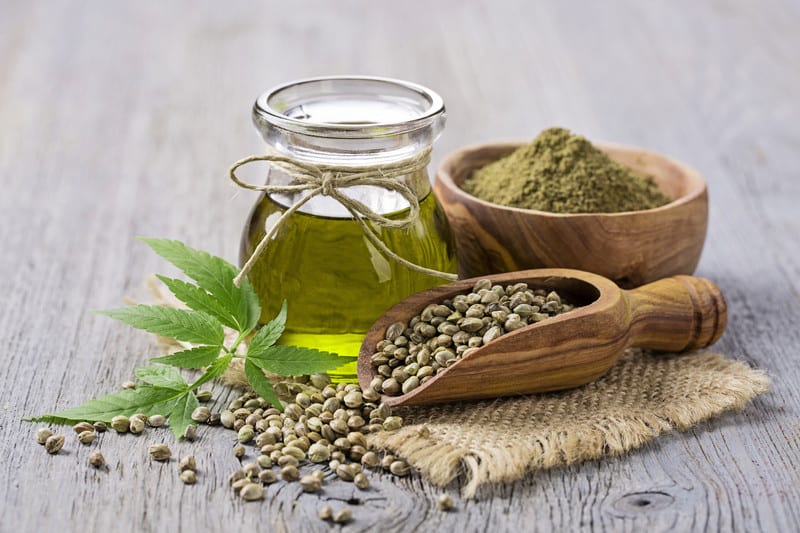 This oil is specifically called “full-spectrum” because it contains all the beneficial compounds or cannabinoids naturally occurring in hemp plants. These compounds include cannabinoids such as tetrahydrocannabinol (THC) and cannabidiol (CBD), terpenes, and flavonoids.

Typically, the predominant cannabinoid in these oils is CBD. Can hemp oil get you high? Absolutely, not. With THC at .3% hemp oil extract cannot get you high, though it’s enough to contribute to the entourage effect. We’ll discuss that in further detail below.

In other words, full-spectrum hemp oil has been subjected to treatment to rid it of all traces of THC. This will then yield broad-spectrum hemp oil. THC is responsible for the psychoactive effect of cannabis, but with hemp plants, there’s hardly anything like that.

It is believed that these trace amounts of THC in full-spectrum hemp oil helps with the entourage effect and can improve the effectiveness of cannabinoids like CBD.

However, if you don’t want any THC content in your hemp oil, broad-spectrum hemp oil is the way to go, as it also contains other components such as terpenes and flavonoids.

CBD isolate is also an extract obtained from full-spectrum hemp oil but devoid of all other components except CBD. It is most commonly extracted using cold CO2 methods that remove all but the CBD molecules from the plant. The result is a fine, white, crystalline powder that readily dissolves in liquid.

Unlike the other types of hemp oil described above, the hemp seed oil is derived from the seed of the hemp plant. The other types come from the flowers, stem, and leaves of the plant.

You’ll notice that hemp seed oil has other beneficial elements such as essential fatty acids and amino acids, high levels of vitamins A, C, and E, protein, fiber, and minerals. But it doesn’t have any cannabinoids.

Yes, there’s a sharp difference between full-spectrum hemp oil and marijuana oil. Marijuana oil is made from cannabis and not hemp plants. Although marijuana and hemp are both species of cannabis plants, they have different proportions of cannabinoids, which is where the difference majorly lies.

Hemp has trace amounts (0.3%) of THC, while cannabis has way more and can produce psychoactive impact when ingested. Therefore, marijuana oil, also known as cannabis tincture or cannabis oil, is not the same as full-spectrum hemp oil.

However, it contains other compounds, such as terpenes, flavonoids, and phytocannabinoids.

This is a chemical reaction that occurs when a combination of different cannabinoids is present in the body simultaneously, thereby enhancing all their effects at the same time.

The entourage effect explains that although each cannabinoid will exert different effects in the body alone, the combination of several cannabinoids in the body simultaneously impacts each of them to produce different enhanced products.

Several studies have revealed that the individual therapeutic effects of cannabinoids are not as effective as when used in combination or in the presence of other cannabinoids.

In 1999, Israeli scientists Shimon Ben-Shabat and Raphael Mechoulam came up with the idea of the “entourage effect” after realizing that cannabinoids found in the hemp plant work in a similar pattern as the body’s endocannabinoid system.

In essence, the “entourage effect” suggests that full-spectrum hemp oil is a more potent alternative than other types of hemp oil since it contains all the naturally occurring compounds.

The benefits of CBD are best understood when we put the component cannabinoids in perspective. Cannabinoids are basically chemical compounds found in hemp plants that naturally interact with the endocannabinoid system (ECS) of the body. The ECS is responsible for controlling or regulating essential functions in the body like sleep, appetite, mood, stress, anxiety, pain, and so on.

The ECS has receptors via which these cannabinoids interact with it. When the cannabinoids bind with the receptors in the ECS, they alter or affect how the body reacts to adverse symptoms like pain, inflammation, anxiety, stress, etc.

Based on their interaction with the endocannabinoid system, they can ease pain and stress, boost the mood, promote a healthier sleep cycle, and so on. Some of the cannabinoids present in hemp plants include cannabidiol (CBD), and cannabichromene (CBC), cannabigerol (CBG), and tetrahydrocannabinol (THC).

Yes, it is – mostly in all 50 states. This is because hemp oil extract and full-spectrum hemp products contain less than 0.3% THC, which is the FDA approved limit. Federal legal full-spectrum hemp oil products include CBD tinctures, capsules, balms, salves, and CBD edibles.

Do note, however, that the legality of these products may be subject to prevailing state laws. There`s some sort of divergence of view on cannabis-related matters at state and federal levels. Therefore, it is best to confirm if consumption is supported where you are and if there are limits pertaining to dosage.

What is full-spectrum hemp oil? It is the base ingredient for full-spectrum hemp products, believed and shown to have some therapeutic effects on the body. The most significant difference between hemp oil extract and cannabis oil is that it is not psychoactive in effect, and it offers the body a host of benefits without getting you high.