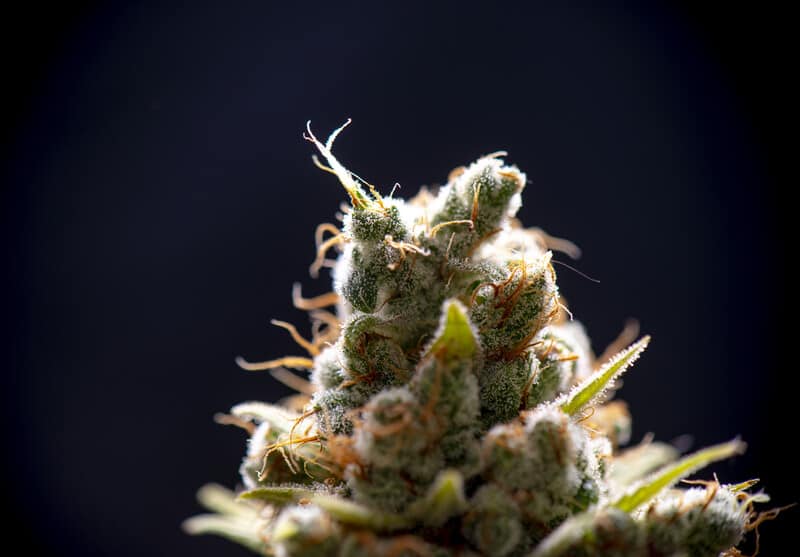 This Banana OG strain review will have the essence of bananas on your tastebuds! If you are one of the majority that enjoys that smell of bananas, you will probably fall for Banana OG. The intense potency with its kushy heritage is just like icing on the cake.

Let’s see what this wonderful marijuana strain has to offer for recreational and medicinal purposes!

This 70/30 indica-dominant hybrid strain is the result of crossing OG Kush and Banana Kush.

OG Kush has been around since the 90s and has launched the infamous west coast cannabis market into stardom with its many child-strains.

There are many popular phenotypes of OG Kush, including Tahoe OG, SFV OG, and Ghost OG. Its genetics are also passed along to child-strains like Girl Scout Cookies and Bubba Kush.

Banana Kush, also known simply as Banana, has OG traits as well. It is the result of crossing Ghost OG and Skunk Haze.

Its essence is reminiscent of a fresh bunch of bananas, which finds its way into Banana OG as well. In addition to Banana OG, it has spawned great child-strains like Strawberry Banana and Banana Sherbert.

For fans of the essence of bananas and the OG Kush heritage, Banana OG is a potent godsend.

Luckily, seed stock is regularly available through online seed banks in feminized form, so you can try your hand at growing a crop of Banana OG for yourself.

In the meantime, this strain is popular enough to find its way into many dispensaries, both recreational and medicinal. If you live in an area with an established cannabis market, Banana OG is probably already right around the corner.

Banana OG has been experimented with by breeders to create new child-strains also. Two of the more common pot strains are Banana Punch and Banana Cream OG.

Banana Punch is a cross of Banana OG and Purple Punch. The flavor is dominated by bananas, berries, and pineapple and it delivers creeping sedation similar to what Banana OG offers.

Banana Cream OG is the resulting cross of Banana OG, Blue Dream, and Ocean Beach OG. Orange and spearmint dominate the essence instead of bananas, but the sedation is quite similar to Banana OG.

Banana OG is an easy-to-grow cannabis strain, which makes it a great choice for those who aren’t the best gardeners but still need high potency ganja. Indoor growers can expect to harvest around 1.2-1.4 ounces per square foot of plant.

Outdoor growers who allow Banana OG to reach its potential vertically and laterally can expect somewhere around 14 ounces of bud from each plant grown.

It takes about 7-8 weeks, depending on the growing environment and climate, to reach full maturity in the flowers. This means outdoor harvesting should be happening in late September.

This makes it a good choice for those who want to harvest their dense indica-dominant plants before the impending rains that hit most of us starting in October.

While the essence of this cannabis strain is awesome, the sight of the mature buds is less-than-breathtaking.

The lime green buds look nice but they are covered with brown-colored hairs that have you yearning for that healthy-looking orange color that most cannabis strains tout.

Don’t assume that this dull-looking bud isn’t tasty or potent, however!

What Banana OG lacks in the looks department, it more than makes up for with its THC content. 22-27% is average for this heavy-hitting indica-dominant weed strain.

After the first hit, you may think you need more to induce the full effects. But this experience is known to be a creeping high that can turn an initial body-buzz that is euphoric and relaxing into a bout of couch-lock like no other.

This bud is best reserved for nighttime use by those with at least a decent tolerance to THC. Otherwise, Banana OG can serve as a natural sleeping pill!

The kush-influence is noted on the aroma and flavor profiles, but it is dominated by the essence of overripe bananas. The flavor has a hint of woody cinnamon as well. Simply put, if you don’t like the smell and taste of bananas, you have picked the wrong weed strain!

Limonene is thought to be useful in treating depression, anxiety, chronic pain, and inflammation and brings a citrus essence when present.

Myrcene acts as an antioxidant and is thought to be useful in treating insomnia, inflammation, and pain.

Caryophyllene is the only terpene to act on our endocannabinoid system and is thought to be useful for treating inflammation, anxiety, depression, and pain.

This combination of terpenes seems like a wonderful holistic medicine!

Other strains with a similar terpene profile that offer experiences like Banana OG include Strawnana, King Louis, Rocket Fuel, and Sour Kosher.

While the THC percentage may be too high for novice medicinal marijuana consumers, Banana OG has many reported medical benefits. It’s known to be useful in treating many conditions, including:

If you can handle the high dosage of THC without the predisposition to paranoia, you will be saying wonderful things about the medicinal potential of Banana OG.

Those who like the OG Kush family of weed strains are sure to find something to love with Banana OG. The ripe essence of bananas comes in bunches and prospective growers can get their hands on feminized seeds from top-shelf online seed banks.

The pot strain is rated as easy to cultivate, but that doesn’t mean you should go into the growing season blind. Check out our medical marijuana growing training course if you want to refine your green thumb and grow the best ganja possible!