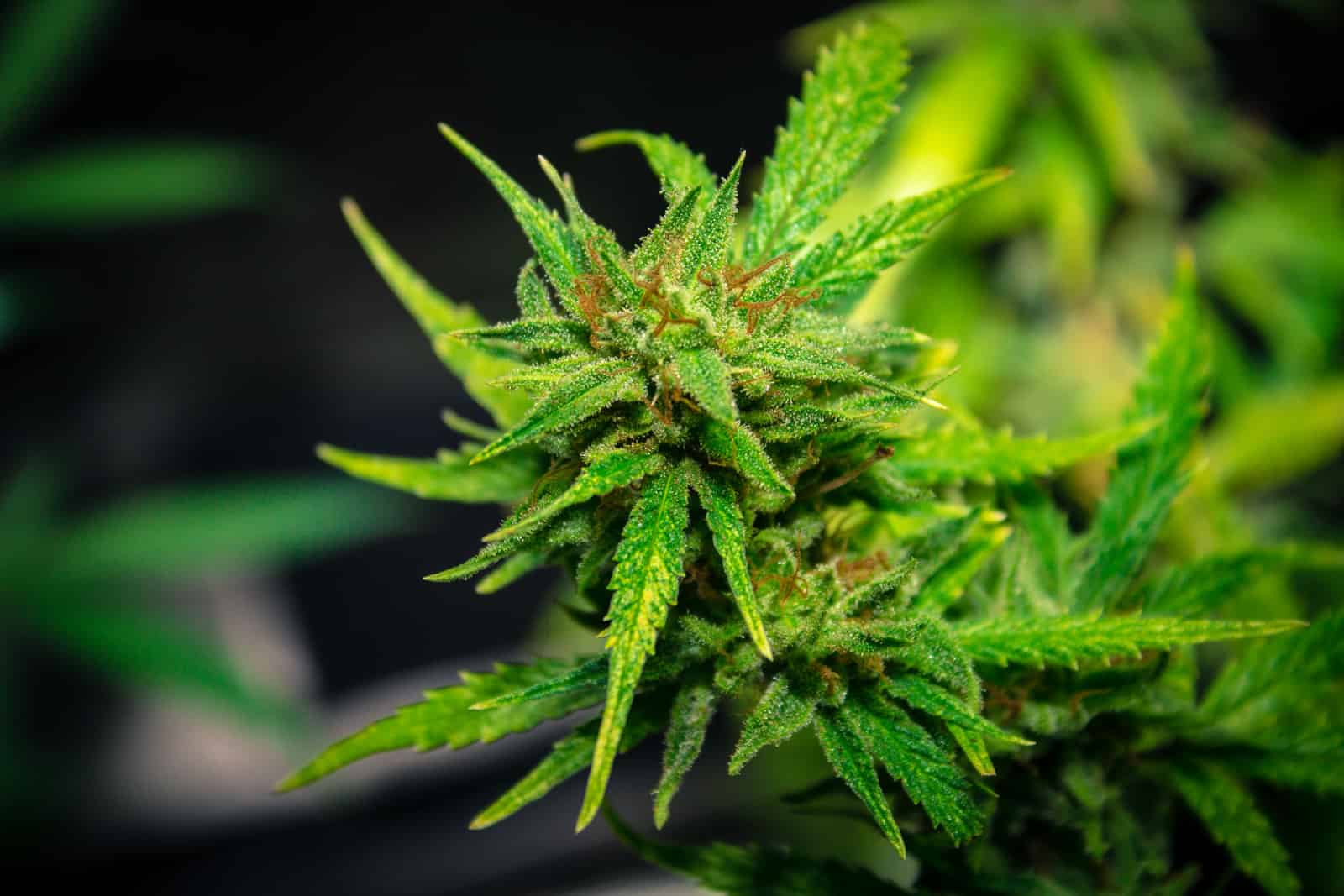 Let’s dive right into the only Purple Punch strain review you’ll ever need. The Purple Punch strain is a potent and sweet-smelling cannabis hybrid that can lull you into a relaxing state where your worries are a thing of the past. It’s fruity and sweet aroma make you feel like you’re having a sugary dessert.

What Is The Purple Punch Strain?

Purple Punch is a vigorous indica-dominant marijuana strain with calming and uplifting characteristics. The strains produce a strong coat of resin that contributes to its relatively high THC concentration. Purple Punch has THC levels between 16 and 20 percent. Some Purple Punch strains can easily exceed the 25 percent THC mark. Only traces of CBD and CBG are present.

Don’t mistake Purple Punch for a similarly named strain known as Purple Sticky Punch, which is a sativa-dominant hybrid cross between Chemdawg and Purple Afghani strains. It is a strain of its own that can meet the potency levels needed for high-tolerance users or be micro-dosed for an energizing experience.

Purple Punch’s origins are muddled in rumors. The original Purple Punch is thought to have been bred by the Hawaiian breeders at Supernova Gardens. Despite its mysterious origin, Purple Punch has been successfully grown by numerous world-class breeders around the world including the Los Angeles-based Jungle Boys.

Cannabis Now reports that the breeder behind The Village was the first grower to successfully commercialize Purple Punch strains. He told Cannabis Now, “I kind of knew about Purple Punch before I got it, but I didn’t know too much about it. I hadn’t seen many examples.” The Village said he obtained a cut of Purple Punch through his friend, simply known as the Budologist.

Once dispensaries and customers started to grow wise to this new indica-dominant strain, Budologist and The Village decided to form their own seed company called Symbiotic Genetics, which would eventually become the fastest-growing cannabis seed company in the world. They got permission from Supernova to track down a Purple Punch male to dust the best clone-only phenotype.

From these seeds, a male with similar characteristics to the original Purple Punch was used to develop a stronger Purple Punch strain called the Purple Punch F2. Purple Punch would go on to earn critical acclaim during its 2017 year of release. It continues to amaze cultivators and consumers across the nation.

Purple Punch’s robust features are a result of a cross between Larry OG and Granddaddy Purple strains. Larry OG and GDP are two indica-dominant strains that produce a heavy blanket of trichomes. Their richness in THC and earthy and sweet aromas result in an astounding Purple Punch marijuana hybrid.

Granddaddy Purple, also known as GDP or Grandaddy Purp, is a relaxing cannabis strain with strong notes of grape, berry, and pine. Bred by Ken Estes in 2003, GDP is a legendary indica cross of Big Bud and Purple Urkle strains. GDP is another California creation with strong mind and body effects helpful for medical consumers. Other GDP children include Cirrus and Ivan strains.

Larry OG, also known as Grandpa Larry and Lemon Larry, is a balanced cannabis strain hailing from Orange County, California. This indica-dominant strain is a cross between OG Kush and SFV OG strains. Larry OG is a strong strain that elicits a full-body buzz and alertness. Its aroma is a mixture of pine, citrus, and pepper. Larry OG’s other strain children include Bloo’s Kloos and Dolla Sign OG Kush.

Purple Punch’s hardy growing characteristics and sweet-smelling aroma and flavor have made it a prized strain for cultivators looking to grow a new and uplifting strain. The strains typically feature the word Punch in their name, but not always.

Mimosa is another Symbiotic Genetics creation with Purple Punch genetics. Mimosa is a cross between Clementine and Purple Punch strains. This sativa-dominant strain has one of the most citrus and orange-infused aromas and flavors around. Jungle Boys have helped propel Mimosa as a mainstream strain in California and beyond.

GMO Punch is a cross between Purple Punch and GMO strains. This exciting cross produces a plant with a large amount of resin and high yield. GMO Punch’s aroma resembles earthy garlic, sour and sweet grapes, and very ripe fruit.

Hell’s Punch OG is a cross between Hell’s Angels OG and Purple Punch. Hell’s Punch OG has a citrus, diesel, and grapey aroma. Its effects are fast-acting and deliver a heady buzz without leaving you too sedated.

Wizard Punch is a cross between Purple Punch and Blissful Wizard strains. Wizard Punch has a sweet and flowery aroma and a fruity undertone. Its purple-hued buds give it enormous bag appeal. Wizard Punch’s THC levels can reach up to 30 percent.

There are many other purple strains to check out as well.

Purple Punch’s unique terpene profile contributes to its sweet smell of grape, candy, berries, and baked goods. Break apart its sticky buds to uncover a tangy and tart sweetness that resembles the scent of a sugary fruit juice. Many users compare its aroma to that of a freshly-made dessert with its indulgent and pungent smell of berries and cherries.

Purple Punch’s main terpenes include the peppery and spicy caryophyllene, the blast of citrus known as limonene, and the pine-scented terpene called pinene. Caryophyllene is thought to have anti-inflammatory characteristics. Limone is believed to provide stress and anxiety relief. Pinene can be found in other household herbs such as rosemary. Other common terpenes include linalool, myrcene, terpinolene, and humulene.

Purple Punch’s strong THC content results in a powerful mind and body high. A cerebral euphoria transitions into an all-over body relaxation. You may feel happy, euphoric, and, sometimes, sleepy, if you take a high dose of Purple Punch. Purple Punch’s calming buzz produces a tingling sensation throughout.

Purple Punch can be sedating and leave you knocked out on the couch while enjoying a good movie. In smaller doses, Purple Punch can give you that boost of concentration, energy, and productivity you needed. Whether you’re exercising, reading a book, or getting ready for bed, Purple Punch has got you covered.

In terms of effects, you may be wondering, “what strains are purple punch similar to?” Each strain and batch offer differences in potency and terpenes. Still, some strains offer generally similar energizing effects, albeit, with varying aromas. Here are just a few marijuana strains similar to Purple Punch, plus any notable differences in strain effects and smells:

Purple Punch’s mental and physical effects have been used to treat symptoms associated with nausea, pain, stress, anxiety, depression, and insomnia. It's high THC concentration has helped medical patients with chronic pain, muscle spasms, headaches, or insomnia due to its fast-acting effects when smoked or vaporized.

Many medical patients use Purple Punch for its stress-relieving characteristics. Patients suffering from mood disorders, anxiety, depression, or stress have experienced mental and physical relief with Purple Punch. This hybrid strain relaxes muscles, which, in turn, places you in a blissful state where worries are a thing of the past.

Purple Punch can be found in many medical and recreational cannabis markets. Major marijuana markets such as Washington, Oregon, and California have a heavy presence of Purple Punch throughout their dispensaries. Other states such as Oklahoma and Arizona are also major Purple Punch-selling states.

Purple Punch seeds are easy to obtain from online seed banks such as Barney’s Farm. Grab one, three, five, or ten seed packs to start growing your own Purple Punch marijuana plant at home, if you live in a legal state that allows it. Purple Punch tends to grow short and stocky with an abundance of trichomes throughout its buds, leaves, and stems. Don’t be surprised if Purple Punch strains test over 25 percent THC.

Purple Punch can grow in both indoor and outdoor environments. When grown under the right conditions, Purple Punch can produce a high yield during its seven-to-eight-week flowering period. Purple Punch produces dense and resin-coated buds with purple-hued leaves and bright orange pistil hairs. It is resistant against mites, but can be vulnerable to mold if it doesn’t get enough airflow.

Purple Punch can reach well over five feet in outdoor settings and produce moderate-to-high yields. It does not grow excessively in the vegetative cycle. Instead, the plant consistently grows during both the vegetative and flower cycles.

Learn How to Grow Purple Punch at CTU

Interested in growing your own Purple Punch strain? CTU offers the country’s most renowned online cannabis college program where you can learn how to set up your own home cannabis grow and produce medical-grade cannabis on a budget. Learn from industry professionals how to produce a high and resinous yield.

Sign-up for CTU’s online marijuana training program for cannabis cultivation and learn so much more about cannabis extraction, cooking with cannabis, using cannabis as medicine, and finding a job in the cannabis industry. Learn from the best in the business and start your rewarding career in the industry today.