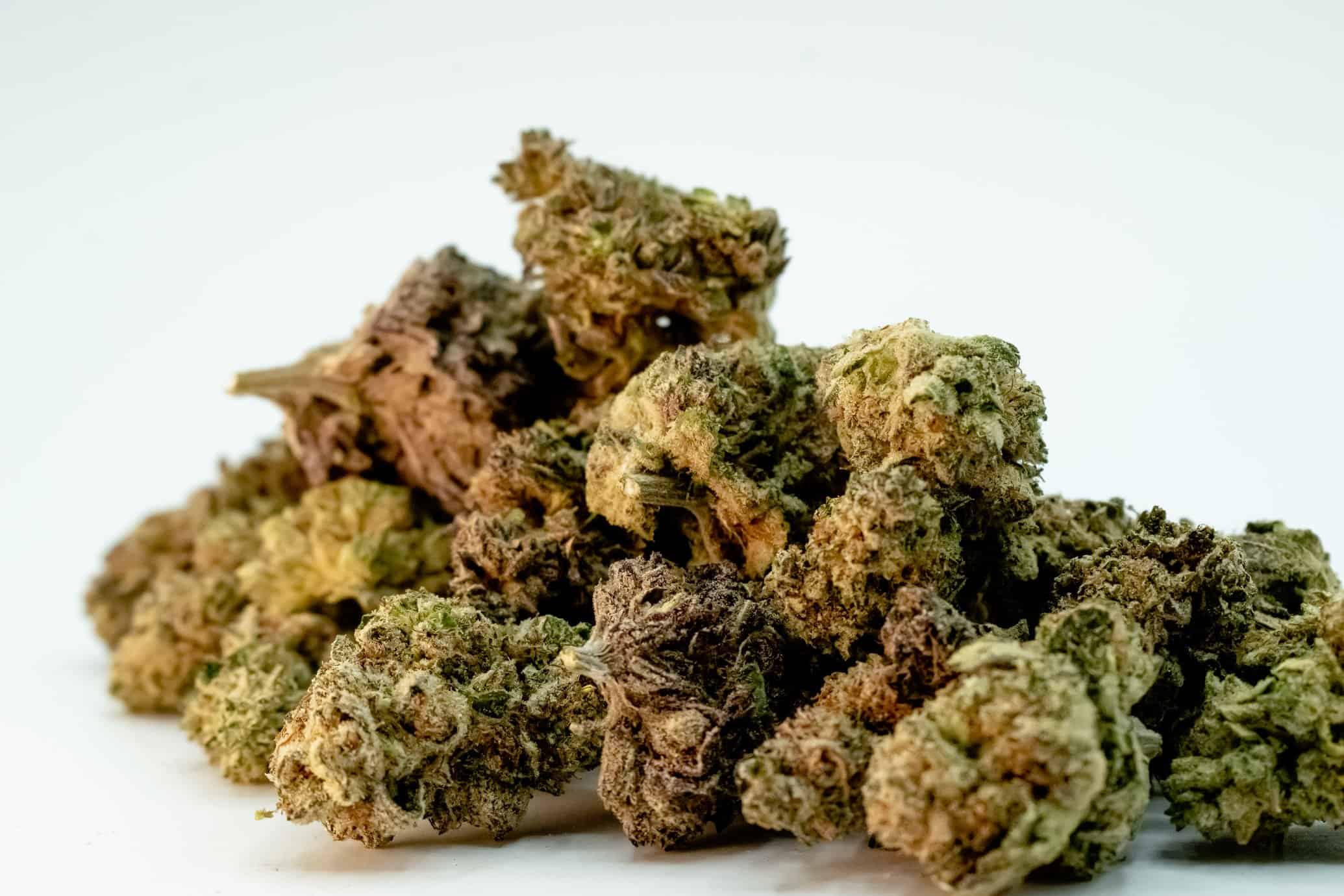 How to Tell if Weed is Laced

Consuming legal marijuana can produce a wide range of therapeutic benefits. However, consuming laced marijuana with illicit drugs or other harmful substances can offset the health benefits of weed and cause serious side effects, including death.

If you want to steer clear of laced weed, our guide describes the substances marijuana can be laced with, how to tell if weed is laced, and what the signs of consuming laced cannabis are. Here is how you can stay safe out there.

What Is Laced Weed?

Lacing drugs is common practice in the illicit market and adds weight to the product to obtain a higher profit. In some instances, drugs are laced with other substances to amplify the intoxicating effects, such as heroin being laced with fentanyl. Consumption of laced substances can often lead to severe effects or even death.

Cannabis is not commonly laced with other intoxicating substances compared to other drugs such as heroin, LSD, and methamphetamines. However, the risk is always there with marijuana bought from illicit sources.

Bad actors may choose to lace marijuana to add bulk to its weight and increase profits or enhance the smell, aroma, or appearance of low-quality cannabis. Buying from legal retailers is the best way to avoid laced marijuana.

What Substances Can Marijuana Be Laced With?

Weed can be laced with various harder drugs and other harmful substances, including:

How to Tell if Weed Is Laced with Cocaine

Cocaine-laced weed is usually used intentionally to enhance the stimulating effects of the drug mixture. In the illicit market, cannabis is not commonly laced with cocaine and sold to unsuspecting customers.

Mixing cocaine and weed can have several side effects: paranoia, hallucinations, seizures, increased heart rate and blood pressure, altered perception of time, and impaired judgment. In some cases, it is possible to overdose on cocaine and weed due to cardiovascular issues like a stroke or heart attack.

How to Tell if Cannabis Is Laced with Fentanyl

Fentanyl is a synthetic drug that is 50 times more powerful than heroin. Fentanyl-laced weed is not very common but can be a risk, especially since the drug is odorless and tasteless. Fentanyl-laced marijuana, even in small doses, can increase the risk of overdose. Signs of fentanyl consumption include sleeplessness, slow or no pulse, slow breathing, and pale skin.

How to Tell if Cannabis Is Laced with PCP

PCP, also known as angel dust, is a dissociative and hallucinogenic drug that has been known to be laced in cannabis to broaden the intoxicating effects. While this combination of drugs, known as dusted weed, is usually sought out for its powerful effects, in some cases, it can be consumed unintentionally.

Side effects of consuming PCP-laced weed include:

How to Tell if Cannabis Is Laced with Heroin

The most common way to consume heroin in some countries is by smoking a cannabis joint laced with the drug. Heroin is a highly addictive drug made from resin from the seed pod of the opium poppy plant.

Unintentionally consuming heroin-laced weed is dangerous, especially if a person has never used the drug before and has a low tolerance. In these cases, a user can easily overdose on the drug.

Signs of consuming heroin-laced weed include:

How to Tell if Weed Is Laced with LSD

LSD is a synthetic hallucinogenic drug known for its visual hallucinations, altered sense of time and identity, and delusions. When heated, LSD will degrade but may be applied to the end of a joint and absorbed when smoking the joint. Even in small amounts, LSD can produce intense hallucinogenic effects that can last up to 12 hours.

While LSD is not known for producing severe physical side effects, it can result in other adverse effects, including:

How to Tell if Weed Is Laced with Methamphetamine

Some reports indicate that cannabis can be laced with methamphetamine (crystal meth) and produce intense effects. Meth can produce a distinct chemical odor when heated. Side effects of consuming meth-laced weed include severe hallucinations, delusions, seizures, confusion, and overdose.

How to Tell if Cannabis Is Laced with Ketamine

Ketamine is a party drug commonly used for its hallucinogenic and associative properties. If the user does not know the weed is laced, it can lead to dangerous consequences. Consuming ketamine-laced weed can result in increased heart rate, drowsiness, disorientation, extreme dehydration, and overheating.

Cannabis plants are naturally able to absorb carcinogenic heavy metals, such as lead, cadmium, chromium, and mercury, from the soil, making them helpful in cleaning up contaminated sites but dangerous for users who smoke the stuff.

Drug dealers can intentionally lace cannabis with toxic metal to add weight and increase profits in some instances. Lead has a grayish color that makes it difficult to detect with the naked eye. If possible, we recommend only buying marijuana from legal sources that have tested their products for contaminants like pesticides and heavy metals.

How to Tell if Weed Is Laced with Embalming Fluid

Since the mid-1980s, reports indicate that some users seek marijuana laced with embalming fluid (formaldehyde) to experience more powerful effects. Embalming fluid is a blend of chemicals used to preserve bodies after death. In laced weed, it can be used as a solvent carrier for PCP.

How to Tell if Cannabis Is Laced with Fungus, Bacteria, or Pesticides

Even in legal markets, cannabis can contain unsafe levels of mold, fungi, and bacteria. While these substances are not intentionally laced in products, they may end up in the final product due to practices in growing, drying, curing, and storing the flower.

We’ve seen product recalls of cannabis that tested positive for unapproved pesticides and high mold levels. Myclobutanil is a fungicide treatment commonly used on crops but turns into hydrogen cyanide when heated, which can affect those with compromised immune systems.

How to Tell if Weed Is Laced with Glass

Although uncommon, some reports indicate weed was laced with crushed glass to add weight to the product and mimic the plant’s naturally produced trichomes. Ingesting glass is a significant health hazard. If you suspect your cannabis is laced with glass, we recommend rubbing it on glass or a CD. If the buds leave behind a noticeable scratch, they may be laced with glass.

How to Tell if Weed Is Laced with Laundry Detergent

How to Protect Yourself From Laced Weed

How do you protect yourself from weed laced with other chemicals? We recommend always buying from legal sources that have tested their products for potency and purity. If not possible, inspect your marijuana for hard drugs or other substances. Consider its smell, taste, and appearance before consuming your seemingly regular weed.

If necessary, seek out marijuana addiction treatment or treatment for other drugs to reduce your risk of being exposed to dangerous drugs and experiencing serious effects. Drug addiction and cannabis use disorder can make it nearly impossible to use good judgment when seeking out more powerful effects.

What to Do if You Smoked Laced Weed?

If you unintentionally smoked laced marijuana, seek medical attention immediately. If you feel any unexpected side effects from cannabis, such as extreme drowsiness, confusion, or other symptoms listed above, we recommend heading to the emergency room immediately.

Learn How to Safely and Legally Use Weed with CTU

Whether you are a new or experienced user, it's never too late to get a complete marijuana education.