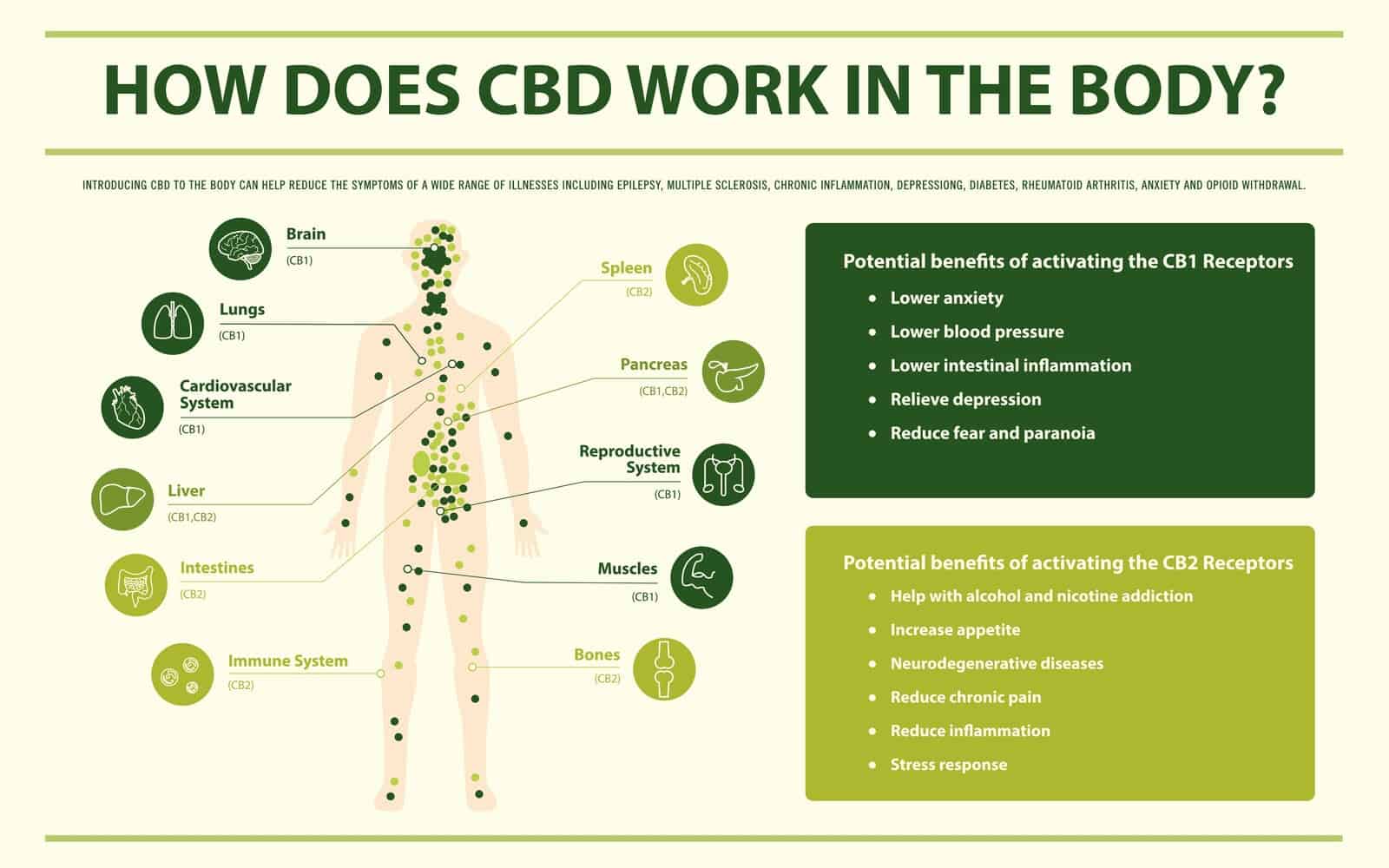 How Does CBD Work In The Body and Its Amazing Effects

Wondering how does CBD work in the body?

Cannabidiol, known as CBD, has grown in popularity worldwide.

Cannabidiol is an extract of hemp plants that finds application in many pharmaceutical products.

Legalizing marijuana for medicinal and relaxation purposes in the US has also helped validate its relevance and potency.

As a result, scientists have conducted lots of studies to reveal the many different ways that we can use CBD.

Much more research is ongoing, for instance, in discovering how CBD can be used to cure certain types of cancer.

The U.S. Food and Drug Administration (FDA) approved the use of Epidiolex (purified CBD oil) in 2018 for treating epilepsy.

This article will shine light on what CBD's benefits and answer questions of how CBD works in the body.

There are over 150 cannabinoids found in cannabis. The most common are tetrahydrocannabinol (THC), cannabinol (CBN), and cannabidiol (CBD).

THC is the substance responsible for the ‘high' associated with cannabis. CBD, on the other hand, isn't psychoactive and won't make you high.

Instead, CBD exhibits other beneficial properties, such as reducing inflammation and pain, treating epilepsy and seizures, and treating migraine and allergies.

There are many different ways in which CBD is beneficial to us, which we'll discuss later in this piece.

How Does CBD Work in the Body?

Like all cannabinoids, CBD produces effects in the body by interacting with cannabinoid receptors.

These receptors are part of the endocannabinoid system (more details on this in the next section).

The body produces two receptors that interact with CBD, and these are the CB1 and CB2 receptors.

While THC will attach to the CB1 receptor, CBD stimulates the receptors, making the body produce endocannabinoids.

CBD and the Endocannabinoid System

Discovered in the 1990s, the endocannabinoid system is a complex biological system that regulates many internal processes such as appetite, sleep, mood, memory, etc.

Researchers believe there is more to be known about the endocannabinoid system.

Various components of the endocannabinoid system function to keep the body running smoothly.

The resultant effects depend on the location of the receptor that the endocannabinoid binds to.

It is believed that CBD does not bind directly to the receptors but influences the binding of the endocannabinoids to receptors.

In essence, it is the activation and binding of these receptors to endocannabinoids that actually produces the many health benefits people have come to associate with CBD.

Why is CBD So Effective?

CBD is used today in treating many medical conditions, and research provides evidence to support the effectiveness of CBD as a therapeutic substance.

For people who prefer not to vape or smoke cannabis, harvesting the medicinal value of cannabis is probably the other best way to put it to use.

When determining how does CBD work in the body, there remains uncertainty regarding specifics like dosage and side effects.

Some studies associate CBD with bettering heart conditions and strokes. Other studies show that it is effective in reducing seizures and managing epilepsy and treating PTSD symptoms.

However, one of the most important uses of CBD today is in relieving pain and fighting inflammation.

Here are some common benefits of CBD in the body:

Several studies reveal that CBD has anti-inflammatory properties and can be used as a natural source for treating chronic pain.

The FDA in 2018 finally approved the use of Epidiolex, a purified form of CBD for treating two types of epilepsy (Lennox-Gastaut syndrome and Dravet syndrome) in people over the age of 3..

These types of epilepsy are characterized by seizures that are quite difficult to control with other kinds of medication.

So far, scientists have shown that CBD can target the endocannabinoid system in a way that most synthetic drugs can't.

Studies show that CBD suppresses the growth of cancer cells. Some researchers have even suggested including CBD in chemotherapy for certain types of cancer.

However, there's a need for more research to understand how CBD combats cancer in the body and how it can be better used.

While medical experts advise that people with chronic anxiety avoid cannabis, they recommend CBD as a substance that can help reduce anxiety.

CBD is becoming increasingly popular in cream and skin ointments.

When applied topically, CBD oil serves as an effective remedy for several skin conditions, including acne and rashes.

Other medicinal applications of CBD:

Most US states have approved the general use of marijuana for both medical and recreational use, while the FDA has approved CBD for medicinal purposes.

Under federal laws, hemp-derived CBD products with less than 0.3% THC are legal but illegal under some state laws.

On the other hand, cannabis-derived CBD products are illegal under federal laws but legal under some state laws.

For this reason, it is advisable to check local laws on the use of CBD, especially when you travel.

For now, only one CBD product is FDA-approved, whereas CBD has properties that make it ideal for treating several other medical conditions.

It is best to seek the advice of a healthcare professional before purchasing CBD products for personal use.

CBD is an effective and efficient means for consuming cannabis, but follow prescriptions provided by doctors or qualified professionals.

To learn more about CBD, enroll at Cannabis Training University and earn your marijuana certification!