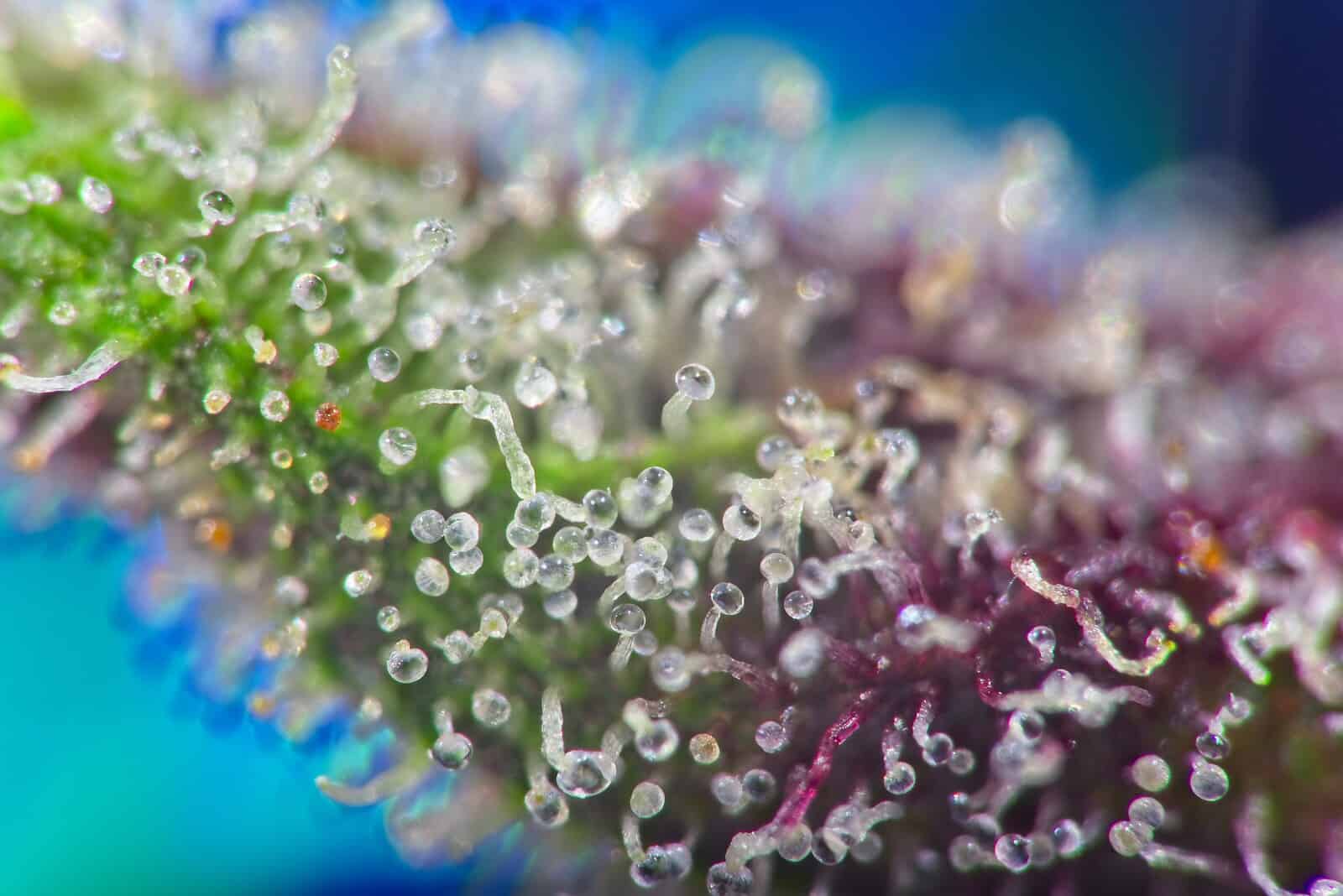 What are cannabis trichomes? Why are they so important for the potency, flavor, and aroma of cannabis flowers? Cannabis trichomes are tiny, hair-like growths that contain the plant’s most essential, active ingredients.

Understanding the importance, development, and role of trichomes on a cannabis plant can help medical and recreational users grow and use cannabis better. Let's dig deep into the function of trichomes and how you can make the best of them!

What Are Cannabis Trichomes?

You've probably seen the fuzzy hairs that range from a clear to amber hue on cannabis flowers, sugar leaves, and stems. These resinous glands are called trichomes and usually have a mushroom-like shape. They can be found across various plants, not just cannabis.

“Trichome” derives from the Greek word “tricoma,” which means “hair.” Officially, a trichome is defined as “a small hair or other outgrowth from the epidermis of a plant, typically unicellular or glandular.”

In cannabis plants, trichomes develop when the plant transitions from its vegetative stage to its flowering stage. When cannabis plants start to produce flower buds, the trichomes begin to form on their flowers, sugar leaves, and stalks.

Trichomes can be found on many plants and range in shape, structure, density, color, and purpose. For instance, trichomes can help carnivorous plants such as the Venus flytrap catch prey. In cannabis, trichomes mainly act as a defense mechanism.

In the wild, cannabis trichomes serve as protection. Trichomes are used to protect the plant's surface cells from harsh environmental factors such as frost, harsh wind, UV rays, and even fungal growth.

Trichomes can also protect plants from predators such as insects and animals. The strong aroma and bitter taste of trichomes can deter predators from eating them.

Trichomes can be found in various sizes and shapes, but there are three main trichomes found on cannabis plants. These categories can be divided into two categories: glandular and non-glandular. Only glandular trichomes produce cannabinoids and terpenes.

Capitate-sessile trichomes are a little bigger than bulbous trichomes. These trichomes have a head and a single-cell stalk. They are the second-most common type of trichome found on the cannabis plant. These are mainly found on the underside of sugar and fan leaves.

Capitate-stalked trichomes are between 50-100 micrometers wide, the biggest trichome type on the cannabis plant. Capitate-stalked trichomes are the types that you can actually see with the naked eye, especially since they are also the most abundant on the plant. They have a long stalk made of epidermal and hypodermic cells and a big gland head, also known as the capitate.

All these cannabis trichomes produce cannabinoids, terpenes, and flavonoids. However, the capitate-stalked trichomes are the most abundant in and near the calyxes of the flowers.

How are trichomes formed? What are the stages of trichome development? Biosynthesis refers to the process of producing complex compounds from a simple precursor. Cannabinoids, terpenes, and trichomes must undergo this process.

Cannabinoid synthesis occurs in the secretory vesicles of trichomes in the gland head at the start of the flowering stage in female cannabis plants. When the cannabis plant begins to form cannabis flowers, the trichomes are produced on the surface of the plant.

Within the trichome’s gland head, cells will start to metabolize and produce acidic forms of the plant’s most active compounds, including THC and CBD, along the trichome’s outer cuticle. The secretory vesicle produces oil, which is moved toward the cuticle, causing the gland head to expand.

The life cycle of trichomes depends on the genetics and growing conditions of the plant. A high concentration of trichomes is not always linked to high cannabinoid and terpene concentrations. Generally, plants that receive a broad spectrum of light will produce more cannabinoids.

What is the ideal harvest time? Many growers usually harvest the flowers when most trichomes have turned an amber color. Trichomes start off clear, turn milky white, and finally turn amber. At this stage, the plant has the peak concentration of cannabinoids.

How Do Trichomes Create Cannabinoids?

Trichomes first produce cannabigerolic acid (CBGA), the mother of all cannabinoids. Other cannabinoid acids like THCA and CBDA have a carboxylic acid group that is removed when decarboxylated (heated).

CBGA is produced in trichomes when geranyl pyrophosphate and olivetolic acid bind together with the help of the GOT enzyme. When this occurs, CBGA is formed. CBGA undergoes a cyclization process where other cannabinoids begin to form. THCA, CBDA, and CBCA are produced with enzymes known as either THCA synthase, CBDA synthase, or CBCA synthase.

What Can Affect Cannabis Trichome Quality and Density?

Cannabis trichomes are volatile compounds that can easily be affected by many factors, including heat, light, oxygen, age, and physical contact. For example, keeping your buds in direct contact with sunlight for a prolonged period of time causes them to degrade at a quick rate.

After harvest, cannabis growers may dry and cure the product in a climate-controlled facility to remove moisture without degrading too many of the plant’s trichomes. In some cases, growers may choose to immediately freeze their buds after harvest to preserve their freshness. Fresh-frozen cannabis can be used to make high-terpene products like live resin.

Cannabis trichomes can undergo solvent-based or solventless extraction methods to separate the trichomes from the rest of the plant matter. Extraction methods range from closed-loop extraction using butane, propane, ethanol, or supercritical carbon dioxide (CO2) to dry sifting or rosing pressing that do not use solvents.

Extracted cannabis oils can be purified to remove everything but the plant’s cannabinoids or preserve the terpenes and flavonoids. The post-processing technique depends on the desired end products, which include concentrates, vape cartridges, infused pre-rolls, edibles, topicals, and more.

Are you ready to level up your cannabis knowledge? Enroll in CTU’s online Master of Marijuana training to learn everything you need to know about the cannabis plant and how to start a career or business in this blossoming industry. Enroll today!