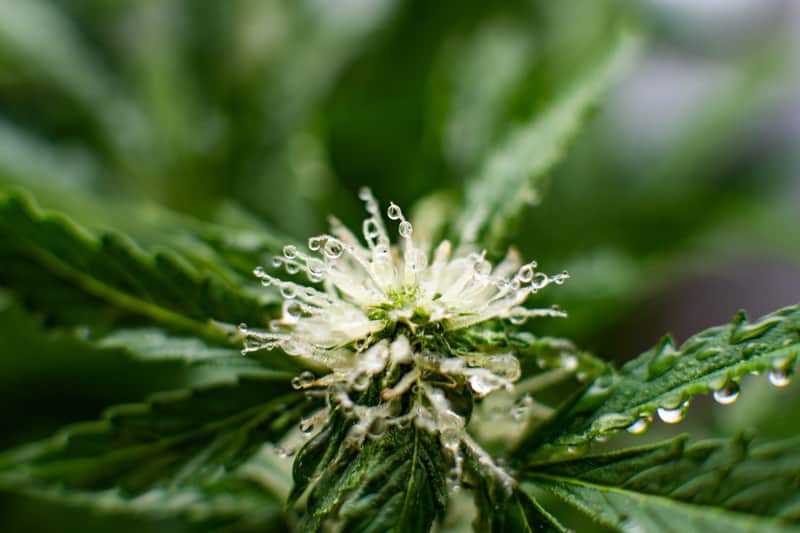 This Apple Fritter strain review will examine an award-winning strain that has tested so high in THC that it dwarves the majority of most popular cannabis strains. Also known as Apple Fritters, this strain hasn’t reached superstardom like some other hybrids to come out of California, but it is sure to please those lucky enough to experience the bliss!

Lumpy’s Flowers in San Diego gets the credit for spawning Apple Fritter. This strain was originally a secret, with its genetics being withheld from public knowledge. We now know that this 50/50 hybrid marijuana strain is the result of crossing Sour Apple and Animal Cookies.

Sour Apple is a cross of Cinderella 99 and Sour Diesel strains and has been touted as a heavy hitter for years. Couch lock is quite common after consumption, and it’s a great choice for treating pain and stress after a long and tiring day.

It has spawned many other child strains as well. Alien Sour Apple and Glitter Apples are just a couple of the derivative strains using the Sour Apple genetics.

Animal Cookies strain, sometimes called Animal Crackers, is a cross of GSC and Fire OG. This is another strong cannabis strain, so it’s no wonder how Apple Fritter ended up so potent. Animal Cookies will make pain and insomnia disappear.

Zookies and Animals Mints have both spawned from Animal Cookies. Strains derived from this child of the Cookie heritage tend to maintain the Cookie traits that have made the GSC lineage so popular across the nation.

Getting Apple Fritter from Lumpy’s Flowers to grow for yourself probably isn’t possible. However, there are other cannabis breeders that have crossed Sour Apple and Animal Cookies and put their take on Apple Fritters on the market.

That means feminized seeds and clones are a possibility for all you prospective growers out there. Will you produce Apple Fritters as potent as Lumpy’s Flowers? Perhaps that’s a challenge you want to take!

As rare as this strain was, it is surprising to see that there have been a few child-strains to hit the market already.

While the fact that Apple Fritter has landed on a list of the most potent cannabis strains ever certainly raised the demand for the bud itself. And new child-strains taking advantage of its traits, for a while the genetics were too secretive to even begin breeding it!

Apple Fritters was secretive for so long that the growing information available at the time of writing is quite slim. Using the powers of deduction, we can say what this strain should behave like after analyzing its parent strains.

It should be a medium-sized plant that will respond well to training, topping, and trimming to maximize yields. High THC varieties like this tend to be the most susceptible to pests and disease, so an advanced green thumb is advised.

9-10 weeks is the typical flowering time with Apple Fritters, with phenotypes leaning towards either indica or sativa creating a minor variance in the maturity times. Most outdoor growers can expect to harvest Apple Fritters in the middle of October.

The buds take on an olive shape and feature dark green and purple hues throughout. The orange hairs are typical of the average bud strain and the trichome coating looks healthy and hearty. While the bud appearance seems typical, the potency of this home-run-hitter is everything but typical!

If I said that Apple Fritters tests around 22% THC, you wouldn’t think of it as one of the most potent strains known to man. But, 22% is the low end of where Apple Fritter tests! In fact, this ganja strain has tested as high as 32% THC, meaning it has reached levels that only a handful of other strains have ever reached!

From the first exhale, your mind will start soaring. Negativity will leave your thoughts, as will most comprehensible thoughts for that matter. The body high will soothe aches and pains and create a vibe of relaxation and bliss that will quickly turn to sleep if you overconsume this THC powerhouse.

The aroma is a bit herbal and earthy but is dominated by sweet apple and vanilla. The flavor is ultra-sweet and tastes just like an apple fritter, just as rich as the apple treat from your favorite bakery!

Apple Fritters is rich in Limonene, Caryophyllene, and Myrcene.

Limonene delivers the fruity essence to Apple Fritter and makes stress and anxiety a thing of the past.

Myrcene helps users relax, which is no problem when consuming Apple Fritter.

While Apple Fritter is unique and ultra-potent, other strains offer similar effects and terpene concentrations if you can’t locate Apple Fritters locally. Some sensible replacements include Fatso, GMO Cookies, and OG Kush Breath.

THC levels this high aren’t typical of most medical marijuana strains, but if you can handle it, use Apple Fritter to alleviate:

The name Apple Fritters may sound innocent enough. Even looking at these buds may make you think that it just average when it comes to potency. But, this fruity cannabis strain is one of the most potent strains ever created!

Our recommendation: Take our Master Of Marijuana education program and master the top marijuana strains known to man, including Apple Fritter!