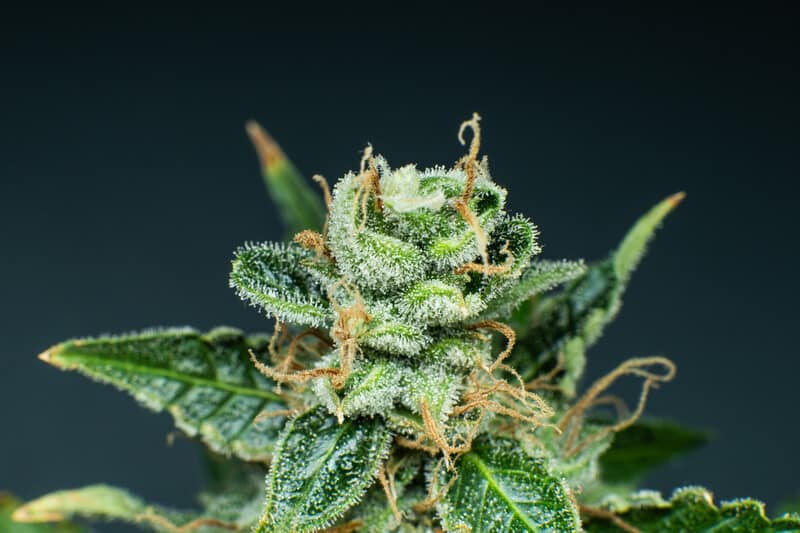 The bottom line on the Gelato 45 strain is that it is so delicious you might think it has been sprayed with flavor additives. The genetics of strains have come such a long way even in the last few years as flavor and potency have both been driven up immensely.

The strain is recommended for those that love the fruity and sweet tastes that some strains offer. While this strain is potent, there could be flower that is perfect for those that smoke once in a while. First-timers might not be able to really appreciate how delicious this strain is when compared to others.

Daily smokers might love this strain as it is potent but not so potent that you become uncomfortable or unable to function.

Is Gelato 45 strain an Indica or Sativa?

Gelato 45 is a 55/45 slight Indica-dominant hybrid of Girl Scout Cookies and Sunset Sherbet. Expect to be slightly giggly so this could be fun to consume with friends before a movie or when you are just joking around. Morning use is recommended as it can boost your mood and make you quite sociable.

Sunset Sherbet will give you a rush of euphoria which is followed by relaxation. The taste is like sweet honey sherbet which is likely what this strain was named after. Expect a boost in your mental energy as your body relaxes leaving you at ease with the world around you.

Girl Scout Cookies came to fame in the early 2010's although its creator is still a mystery. The very potent strain is known for its ability to relieve stress and make the consumer happy. Flavors include mint, cherry, and even a citrus note with some grows coming in at 26 percent THC.

Finding strains that you can use to get motivated or to hang around with friends is important. Strains that have a similar high to Gelato 45 are that of White Buffalo and Blue Cookies.

Gelato 45 can be grown indoors or outdoors depending on your preference. This is a relatively easy strain to grow so it is recommended for beginners or any grower that loves the high/flavor this strain possesses.

The appearance of this bud is dark green but also has a shade of blue in some cases. There is a coating of trichomes that make this an incredibly attractive strain.

Finding strains with similar flowering times and are similar to grow is important. This can make a single grow tent incredibly easy to maintain. Strains that are very close in terms of growing Gelato 45 are Jungle Cake and G4.

THC Percentage Of The Gelato 45 Strain

The THC percentage of Gelato 45 is 14 to 21 percent. Enjoy this strain around friends as it could leave you quite talkative. A game night with friends after smoking this strain could end up in a memorable night that you will want to repeat week after week.

Flavor And Aroma Of The Gelato 45 Strain

The flavor of Gelato 45 is of berry, citrus, and hints of lavender. The aroma includes blueberry, orange, and earth.

The terpene profile is comprised of Pulegone, Bisabolol, and Sabinene.

Pulegone has been compared to menthol in terms of flavor and aroma. Strains that contain this terpene are OG Kush and Pink Kush. This terpene has been used to treat everything from the common cold to headaches.

Bisabolol helps treat anxiety, stress, depression, and insomnia. This terpene has a sweet floral taste and aroma which could be the reason it treats the previously mentioned conditions. Strains that are high in this terpene include Dragon Fruit and Sour Candy.

Sabinene will have a flavor of mint, pine, or pepper. The strains that contain this terpene are known for their anti-inflammatory and anti-fungal properties. Strains that include this terpene at high levels are Bullrider and Red Haze.

Medical marijuana made the plant more mainstream as before “Reefer Madness” was the perception that many had of the plant. Marijuana had been used for years before it became illegal to help as a medical remedy. Gelato 45 can help with the following medical conditions:

Gelato 45 has negligible amounts of CBD but can still be used to treat so many medical conditions. Finding strains that can help you with something that you suffer from daily can change your life. Take the time to test out various strains as it can be a fun way to help you find relief.

Gelato 45 is a great strain to try if you usually aim for the strongest strains possible without regard for flavor. Investing in seeds of this strain can allow a first-time grower to have a decent yield. More difficult strains to grow could leave a new grower with nothing to show for their efforts as they could kill the plants.

Growing the best marijuana of your life is not going to be done on your first attempt without professional help. Certain strains are far different in terms of the water and light that they need. Even the humidity can impact the health of the plants which is no within your control when growing outdoors.

CTU offers the best in online marijuana education whether it is in terms of making edibles or growing cannabis. Our faculty has put together courses that will no longer have you wondering how your grow is going. You can even gain employment from learning how to grow better cannabis if you are looking for a career change.