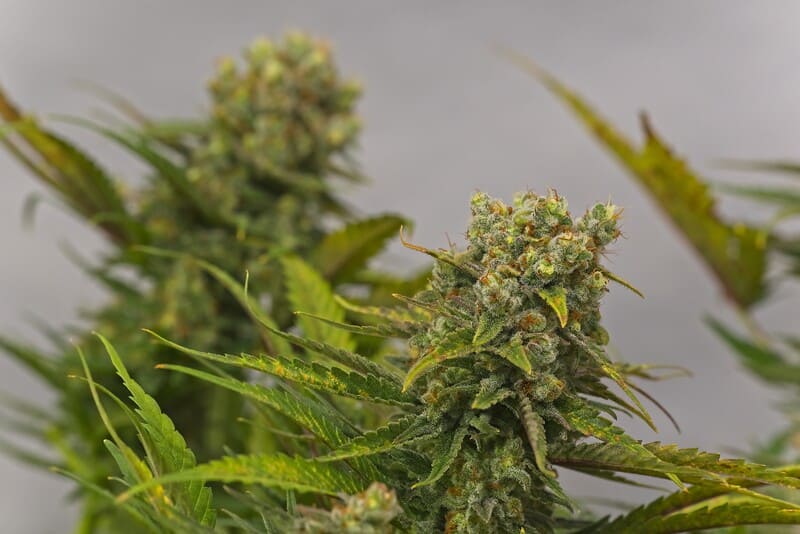 Is GDP an Indica or Sativa? Grandaddy purple is an indica-dominant strain.

With such a unique, high-quality look and flavor profile, Granddaddy Purple weed became popular all over the west coast and spread like wildfire.
Its genetic lineage is sought-after and has even been used to parent child-strains like Purple Punch and Cherrie Pie, which are both highly rated as well.

One interesting thing to note about its lineage is that it is so similar to Grape Ape that some people believe they are the same strain. While this is just a rumor, it’s not uncommon for novices and even some professionals in the marijuana industry to confuse the two, due to their similar looks and effects.

It is commonly grown indoors to help promote a perfect environment to bring out the full range of purples towards the end of the flowering cycle. Indoor grows of GDP can produce around 4 ounces of bud per plant.

Granddaddy Purple pot can also grow well outdoors. It is known to produce upwards of 3 lbs per plant when grown outdoors. The buds can become so heavy that the plant may need additional support to avoid snapping branches when it gets close to harvest time.

Proper growing conditions will maximize Grandaddy Purp weed yields. It does best when temperatures hover around 70 degrees during the day with relative humidity levels around 50%.

Granddaddy Purple cannabis takes around 60-65 days to reach full maturity in the buds. Once it comes close to full maturity, leaves and buds will turn a deep purple color if the climate is right.

You can find out how ready your Granddaddy Purple weed is for harvest by examining the trichomes. When trichomes are immature, they appear to be clear.

As they come closer to maturity, they will turn a more milky-white color. This is when THC percentage is the highest it can be.

Letting them mature to the point of trying amber will create a more relaxing high that activating more the body high than the head high. This may be the optimal point of harvest for Granddaddp Purp weed since it is already known for it’s couchlock, relaxing effects that are wonderful at night to wind down from a tough day.GDP THC Percentage

GDP ganja typically comes in around 17-18% THC but is known to go up to 23-27% in optimal growing and harvesting conditions.

Growing and harvesting can be just as important as the strain genetics for THC percentages in the final product. Improper plant care and bad harvesting and curing habits can create GDP with lower potency levels even if the genetics are perfect.

Finding a pure genetic line from seedbanks or clone sellers is important, but that doesn’t guarantee success.

That’s why some dispensaries seem to have better Granddaddy Purple weed than others, even with the same starting genetics!

GDP cannabis is rich in Myrcene, Pinene, and Caryophyllene. These 3 terpenes lean more towards relaxing effects than other prominent terpenes found in marijuana strains.

This makes sense since Granddaddy Purple is known for its relaxing effects that may even induce couchlock. While you will experience a euphoric mental high, your body will probably remain sedentary during the experience as you melt into total relaxation.

This makes GDP the apparent choice for nighttime smoking or consumption.

Users note that the Granddaddy Purple strain has an aroma reminiscent of grapes or berries. The flavor is sweet as well but can be a bit overwhelming for those who aren’t used to such flavorful marijuana strains.

With the relaxing effects of Granddaddy Purp, it is a perfect candidate for those suffering from insomnia. It lives up to its genetic lineage of indica as it allows users to relax and sleep well throughout the night.

The relaxing effects also make it a good choice for those with high levels of stress and anxiety. It has also shown promise for pain management and those with overactive muscles, with conditions like restless leg syndrome or muscle spasms.

It’s not going to be a good cannabis strain for those who need a pick-me-up or a creative boost. It’s best served for those who need to wind down and reduce pain to encourage less mental and physical fatigue from a hard day’s work.

The Granddaddy Purple strain is so popular that it can be found in the majority of dispensaries around the country. It’s relaxing effects also make it a good choice for edibles and tinctures.

Finding GDP genetics to grow can come from high-quality seedbanks and locations that sell clones as well.

Want to learn more about well-known and not-so-well-known cannabis strains? We have many more just like this Granddaddy Purple strain review here at Cannabis Training University.

Learn about similar genetic strains or complete opposites! We have you covered at the marijuana school!