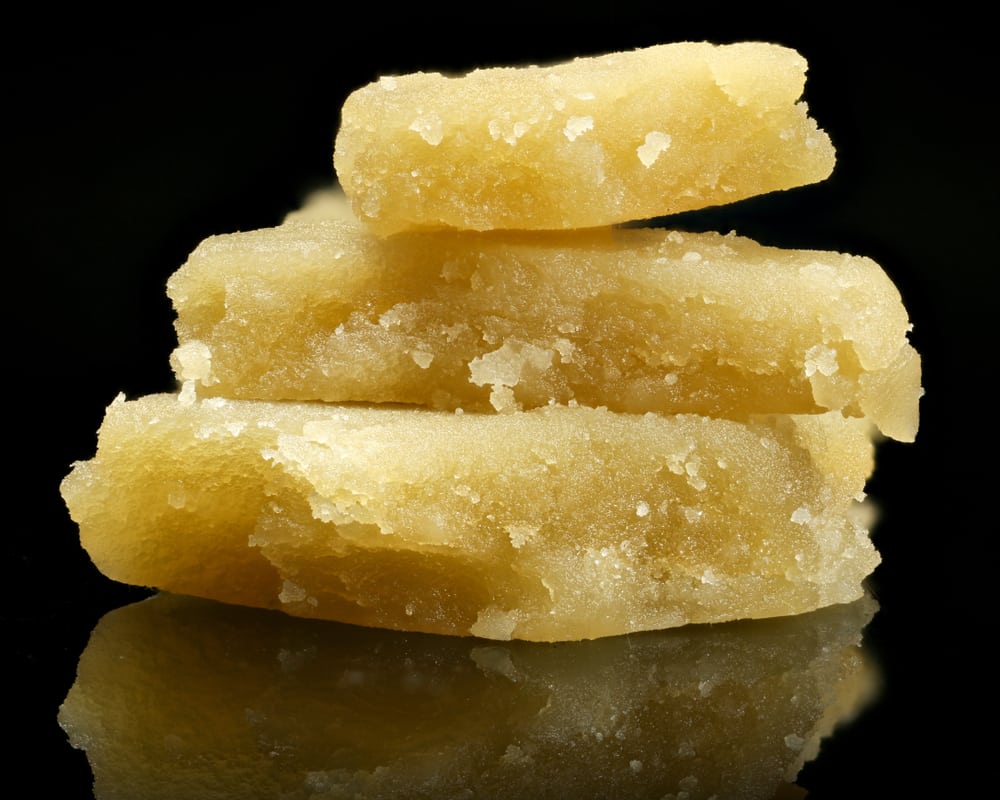 What is Live Rosin?

What is live rosin? Live rosin is one of the hottest and most flavorful extracts on the market. It’s no wonder it’s taken the solventless extraction game by storm. Made from flower, hash, or kief, live rosin undergoes a solventless extraction process using only heat and pressure to squeeze out the plant’s active compounds and produce a refined product ready for consumption.

Before we get too into the weeds (pun intended), let’s talk about live rosin’s less refined counterpart. Rosin is a type of weed extract derived from flower, hash, or kief. Unlike solvent-based techniques that use harsh solvents like ethanol, CO2, or butane, rosin can be made at home using a hair straightener or using an industrial live rosin press in a commercial setting which applies heat and pressure alone to separate the desired compounds.

What is Live Rosin?

Live rosin is made exactly the same way as rosin except for one key difference: processors use fresh frozen buds instead of dried and cured ones. Cryogenically freezing the weed directly after harvesting preserves the plant’s natural compounds to achieve a higher cannabinoid and terpene yield. For you, that means a higher high and a better flavor.

Rosin’s drying and curing process aims to reduce the moisture and chlorophyll levels in the dry bud before consumption. During the drying process, however, the plant’s easily evaporated terpenes are also lost, which results in diluted flavor and effects.  Rosin keeps those minor compounds to enhance the plant’s natural entourage effect.

Live rosin is usually a light and opaque golden color. Its color varies by strain, the extraction process, and batch. Live rosin comes in a range of colors from a creamy tan to a vivid yellow. Its solid consistency varies between a sappy butter and a buttery crumble. It's easy to break apart with a dabber.

The History of Live Rosin

The history of rosin has been refined over thousands of years. It began with the induction of hashish. Hashish is a compressed form of the plant’s sticky resin found mainly on its buds. Original hash-making techniques involved rubbing the plant material between two hands to separate the sticky resin using friction.

Today’s hash-derived rosin involves the merging between the invention of a new concentrate and extraction technique. Live resin techniques were around as early as 2011. They relied on crude and dangerous open-blasting techniques that release flammable solvent into the air. The technique was later refined using closed-loop systems, which contain and recycle the solvent inside the equipment.

Rosin’s rise to fame started in 2015, when California grower, Phil “Soilgrown” Salazar, discovered it by accident. Salazar would press his hash into thin sheets using a hair straightener. One day, he applied too much pressure and discovered that oil was leaking out from the hash. Live rosin combines these recent innovations into the solvent-free and flavorful product we know and love today.

How is Live Rosin Made?

Rosin is made using an industrial rosin press which applies enough force and heat on the hash to remove its resin. Before applying pressure directly to the frozen hash, processors must turn their frozen buds into ice wax. Pressing live flower buds can boil off the extra water weight and ruin the product.

Rosin producers place their frozen buds inside a set of five or more micron filter bubble bags. They're layered in a large container such as a plastic garbage can. The micron filter bags are arranged in increasingly smaller micron sizes for optimum hash separation.

Inside, rosin makers place ice and water and agitate the buds to remove the frozen trichomes. The resin falls down to the bottom of each bag.  After the agitation process, rosin producers end up with a decent collection of resin that must be freeze-dried before being pressed. The resin is placed in a small micron bag and gradually pressed at high temperatures (up to 210º F). The end result is one of the best concentrates on the market.

How to Consume Live Rosin

Live rosin can be consumed just like any other weed concentrate, although, some delivery methods are better than others. Here’s how you can enjoy your rosin:

Dabbing is one of the best ways to reap the psychoactive effects and flavor from your live rosin extract. Using a dab rig (glass or electronic), a blow torch, a dabber, and your rosin, you can light up the nail, place your dab inside, and inhale just like you would from a water pipe/bong.

Start off by heating your dab rig using your blow torch or your e-nail to your desired temperature. Low temperatures between 500 and 600º Fahrenheit are best to retain the product’s full flavor.

Vaping is another fun way to enjoy your live rosin. It is similar to dabbing in that you are heating and inhaling the active compounds, but vaping can be consumed with a disposable vape cartridge, a vape pen, or even an e-nectar collector which requires no loading the rosin into the heating chamber.

Smoking rosin can give you the added high you’ve been looking for when paired with your favorite dry herb strain. Unfortunately, combusting the extract using the high and direct heat of a lighter can degrade much of the extract’s aromatic and flavorful terpenes.

How to Store Live Rosin

Like most wee products, rosin should be stored in an airtight container in a dark, dry, and cool space. Ideally, you’ll want to store your rosin in an opaque container to protect its cannabinoids and terpenes from heat and light exposure.

Live rosin is the new frontier of solventless-based extracts. In a world where consumers are looking for healthier and flavorful alternatives to the solvent-based concentrates, live rosin meets the demands of novice and seasoned consumers.