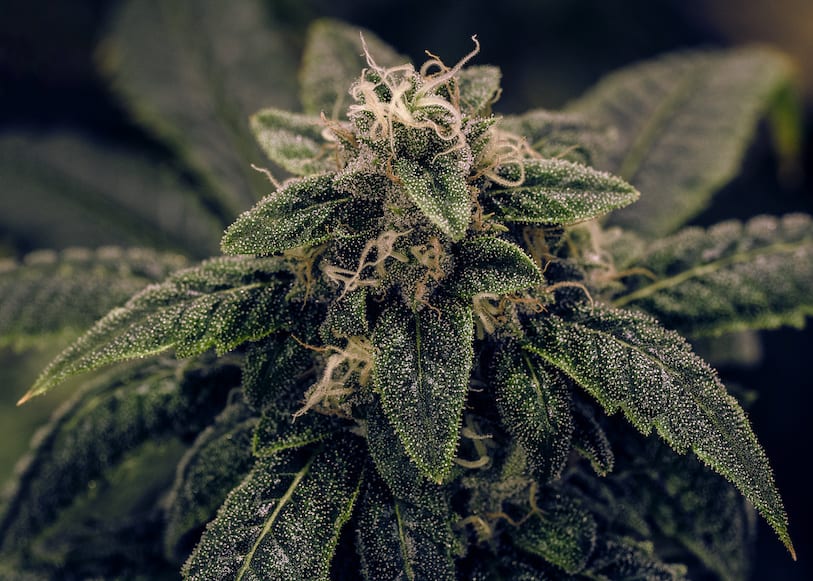 Are you looking for a strain that gives you a prolonged high? Death Star is the real deal. In this review, you will learn more about Death Stars’ phenotype and various medicinal benefits to its users.

A session of this strain is very effective for stress, anxiety, and mood issues due to its users' sedative effects. The strain improves appetite and has an influential force against some ailments such as headaches and a great remedy for insomnia and depression.

Is Death Star strain an indica or sativa?

Death Star is an indica-dominant cannabis strain with 80% indica and 20% sativa. A cross between Sour Diesel and Sensi Star produced this strain with both indica and sativa balanced effects.

The strain was featured in High Times in 2010, and from there, it has been highly valued for its ability to unwind both the body and mind. Although the strains’ THC levels are equivalent to that of OG Kush (27%), its indica percentage makes it dominate.

The Sour Diesel strain is known for its pungent flavor that smells like diesel. The strain became popular in the 1990s and is a sativa-dominant marijuana strain.

It also has some indica relaxation making it effective for medical and recreational use. Sour Diesel is characterized by yellowish-green leaves with red pistils and medium-sized buds.

Euphoric effects associated with the strain help treat some symptoms of anxiety, depression, and stress. After a session, the effects last for about 2-3 hrs.

On the other hand, Sensi Star is an indica dominant hybrid that fills its users with a euphoric effect after intake. The strain is well known for its high THC levels and strong effects.

It has hard colas, and the buds have trichome crystals that sparkle in the dark against a green and purple color. After a session, the body develops a strong high effect that relaxes the muscles.

The strain reduces stress and depression and is also used to generate appetite and even alleviate chronic pains. A cross-breed of these two strains produced the Dark Star Strain.

Death Star Strain grows fairly short and appears gigantic. Purple color dominates towards the base of buds and stems, making the strain easily noticed. It also have green leaves blended with orange pistils and tiny hairs, and the buds are heavily covered with frosty trichome crystals.

The crop is easy to grow and flourishes successfully when grown both indoors and outdoors. The yields are moderate, and indoor growers harvest a maximum of 14 oz/m2 while outdoor cultivators harvest 12oz per plant.

The crop has a short growth cycle as it grows in short bushes with smaller buds. The flowering period generally lasts for around 8-9weeks for the indoor growers. For outdoor growers, the harvesting period is between early and mid-October.

The high THC percentage of this strain is 27%, which is one of the highest ever recorded in the cannabis industry. The high THC levels leave you in a state of couch-lock, especially if you take it in large amounts.

Once taken, the effects build up slowly and suddenly lead to a relaxation of the body. The effects are very powerful, and one feels heavy and floating simultaneously.

The effects can be overwhelming for novice users. Once it hits you, expect overwhelming calmness, exhilarated effects, and sensations of relaxation that ease both your body and soul.

The strain is highly potent, and a few puffs can go a long way for novices. If it's the first time you engage in Death Star, try a little amount and witness the effects slowly. Once you become tolerant of the high THC levels, you can increase the dose gradually.

Death Star strain is well known for its pungent-earthy aroma with a strong smell similar to that of skunks. The flavor and aroma are a combination of their two genetic origins, Sour Diesel and Sensi Star strains. It produces a diverse array of tastes that feels sweet upon the tongue.

Over the past 12 years, Death Star Strain has offered various uses throughout the cannabis world. The strain is a great remedy for clinical depression and also plays a major role in relieving stress.

Other conditions which the strain can treat include:

Consistent use of this strain effectively relieves chronic pains, migraines, and cramping of muscles. Some patients taking medications from the strain have currently reported how it has helped them overcome anorexia.

The strain has a very great ability to numb down pains and aches, and therefore, an alternative method to smoking is helpful, and larger doses are encouraged. Although moderate doses can be effective for mental conditions, overdosing may lead to paranoia and increased anxiety due to the high THC levels.

However, the strain is associated with minimal adverse effects, which you can overcome easily. The effects include dry eyes, dehydration, and cottonmouth, a condition where salivary glands cannot produce enough saliva in the mouth.

To overcome these effects, it is advisable to drink plenty of water before, during, and after a session. A bottle of moisturizing eye drops prevents the pain of dry eyes during a session.

The strain also causes couch-lock in most cases, and therefore, take enough fluids that prevent couch-lock and headaches the following day.

If you are undergoing some challenges such as lack of appetite, stress, depression, and even severe chronic pains, you don't have to worry beyond that. Death Star Strain is an alternative medication and gets you to overcome these disorders.

The strain has proved to be the best selection with minimal side effects, which you overcome easily. For any question about the strain, don't be afraid to consult us, and we give you the best information.