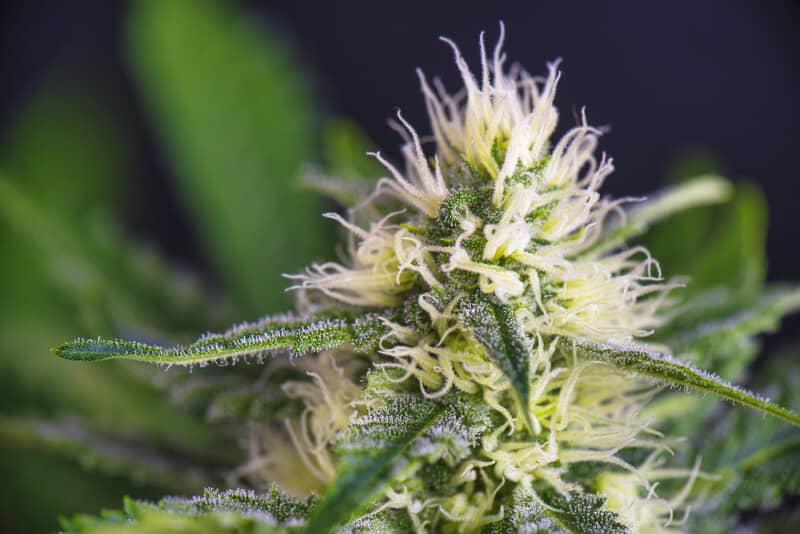 This Jack Frost strain review will show you the result of years of work dedicated to developing a high-quality child-strain. After all, Goldenseed put 5 years of breeding into creating what amounted to the Jack Frost cannabis strain.

With all that hard work and phenotype crossing and backcrossing, Jack Frost became a very enjoyable and festive marijuana strain. Let’s join the party!

As mentioned, Goldenseed took 5 years to refine the genetics of Jack Frost. It is the result of crossing White Widow, Northern Lights #5, and Jack Herer. It is a hybrid cannabis strain that slightly leans towards sativa.

White Widow is a balanced hybrid marijuana strain that came from the Netherlands in the 90s and remains popular. Euphoria and energy are present in the experience and it’s known to spark creativity and be a good social aid.

Northern Lights #5 is the #5 phenotype of Northern Lights strain, a classic that won Cannabis Cup awards back in the early 90s. It’s a classically relaxing indica that features a sweet and spicy profile that originated in Holland.

Jack Herer brings the sativa dominance to Jack Frost. It is also the result of breeding in the 90s in the Netherlands. Known for producing heavy resin and high energy levels, it has multiple phenotypes that bring uniqueness to the table.

The resulting strain known as Jack Frost is the derivative of some of the best strains that the 1990s had to offer. It took those classics and revamped their effects to create a bud that fits into today’s weed culture very well.

Prospective growers will be happy to know that Jack Frost feminized seeds and autoflowering seeds are available through multiple seed banks. It’s an easy-to-grow variety of ganja and the effects are pleasant, making it a good choice for any grow project!

The genetics of Jack Frost have also been used to parent another popular cannabis strain in Blue Frost. It is the result of crossing Jack Frost with Blue Monster. Goldenseed is also responsible for creating this indica-dominant hybrid that elevates your mood without the high energy that Jack Frost delivers.

Jack Frost is easy to grow and produces good yields. It does well indoors and outdoors and is best suited for a soil-based growing medium. It is a bit sensitive to overwatering, so irrigation needs to be closely monitored.

Indoors growers can expect to harvest around 1.5-1.6 ounces of bud per square foot of plant. Outdoor growers should be able to harvest 19 ounces per plant. The plants will put off optimal yields in warm and sunny locations, which can easily be manipulated indoors as well.

The flowering time for this pot strain is 8-9 weeks. Outdoor growers should be ready to harvest in early October while indoor growers can manipulate the light schedule to induce flowering whenever they feel ready.

The buds appear a bit fluffy and dry compared to the dense nugs that flood the market today. The buds are mossy green in color and feature yellow-orange hairs. The most notable feature of the buds is the sheer amount of trichomes that coat the bud. Unsurprisingly, the frosty trichomes elicit the nomenclature of Jack Frost.

The range of THC is typically between 17-23% with this ganja. This makes it a suitable bud for most cannabis users, depending on their tolerance level. Newcomers should try to find Jack Frost which tests around 17-18% THC while experienced consumers can reach for the bud testing in the 20s.

The strain is known for being a good party strain. It boosts energy, creativity, and mood with relative ease. It’s known to spawn a bout of the giggles as well.

The high is long-lasting, with a couple of tokes leading to an experience that can last around 2-3 hours. At the end of the high, the mental buzz melts into physical sedation that may be useful for evening use.

While this bud produces a nice daytime high, the ending may put you to sleep. Blazing after a day a work for a light-hearted evening is usually the perfect time for Jack Frost.

Before we talk about the aromatics and flavor profile, it’s important to note the smoke quality with this weed strain. The smoke itself is known to be mild, smooth, and clean, which is awesome for those who don’t like the dense smokes that some of the popular strains today produce.

The terpene profile is dominated by Terpinolene, Caryophyllene, and Pinene.

Terpinolene is one of the most energizing terpenes known to exist in cannabis and is also good for its uplifting effects. It’s also found in other popular strains like Ghost Train Haze and Jack Frost’s parent Jack Herer.

Caryophyllene is effective to treat inflammation and is found in cannabis strains like Original Glue and Purple Punch. It’s found in the best medicinal marijuana strains typically.

Pinene is found abundantly in all plant life in the world and is great for treating pain, anxiety, and inflammation. It’s a potent medicinal aid and is found in many strains, including Critical Mass.

Medicinal users will like Jack Frost to alleviate the following conditions:

With the availability of feminized seeds of Jack Frost and the ease of growing, you should be able to produce a high-quality crop of this nice bud. There are even autoflowering seeds available for Jack Frost if you are pressed for time.

If you want to ensure that you grow the best crop possible, check out our professional training programs designed for medical marijuana growers. It grows through the basics and teaches the most advanced tactics as well!