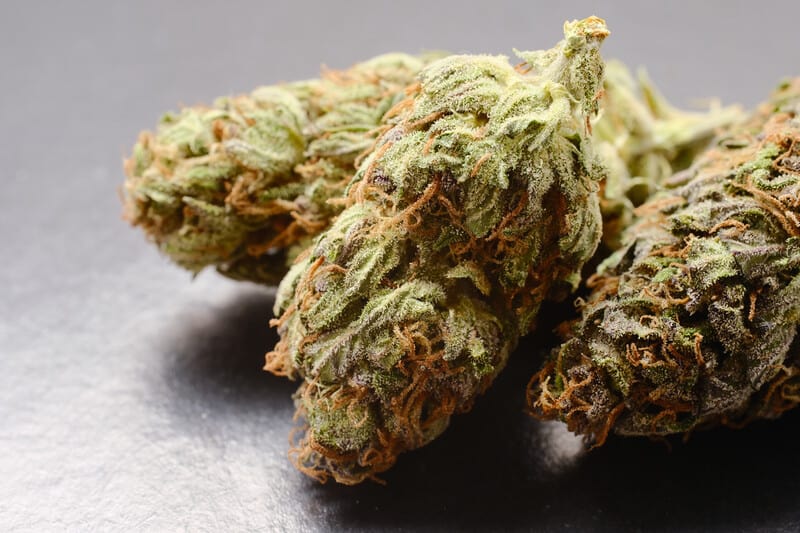 The Pink Starburst strain review gives honor to a candy that has quite a bit of debate about it. Some do not like Starburst but might have strong opinions as to which color is best. Most stoner circles have argued about some sort of candy preference at least once or twice.

The strain packs way more of a punch in terms of potency than its name might indicate. Below will cover what you need to know about the Pink Starburst marijuana strain.

Is Pink Starburst strain an Indica or Sativa?

Pink Starburst is a 70/30 Sativa-dominant hybrid of DJ Short’s Blueberry and Sour Diesel Bx3. If you want mental focus and happiness, this strain will be perfect for you. You will also be physically as well as mentally relaxed without any form of sedation.

DJ Short’s Blueberry is a phenotype of Blueberry which is a heavy Indica-dominant hybrid. The potency is up to 22 percent while boasting berry and citrus flavors. The strain is just beautiful with a blue hue and even blue hairs which you do not see very commonly.

Sour Diesel Bx3 is almost a pure Sativa with up to 26 percent THC. You are going to be zooming around as it is one of the best strains for energy. You will be ready to take your day on and it might make you more productive.

Pink Starburst is relatively easy to grow in a greenhouse environment. You won’t be seeing huge yields as it usually is less than 0.5 ounces per square foot. The plants are also a little over 2 feet tall.

Looking for strains that have higher yields is all about research. The truth is that seed companies give expected yields that are laughable at times. Some might state that you can expect 5 or 6 pounds per plant which simply is not true for a majority of strains.

New growers need to look into strains that require very little besides regular light and water. Autoflowering strains can be great as there is no change in the light cycle required to start the flowering phase. These strains are bred with Russian Ruderalis which flowers in places with little to no light.

The flowering phase of growing Pink Starburst lasts a very short 6 to 7 weeks. Expect bright green nugs with pink leaves. There are orange hairs along with a yellow covering of trichomes.

The short flowering time is not always associated with small yields. This depends on the plant so take the time to figure out what you’ll want to do in terms of growing plans. A huge difference in the flowering times can impact when you grow and harvest a plant.

Pink Starburst has a potency of 20 percent THC. You might want to smoke this strain before knocking out some shores or before taking on an art project. The focus that you’ll have will be pinpoint which is a great feature of this strain.

The flavor of Pink Starburst is of candy and herbs. The aroma is of berries and earth. The terpenes in this strain are Bisabolol, Myrcene, and Pinene.

Bisabolol has a floral aroma that helps induce relaxation. This is why it is great for treating insomnia, depression, and anxiety. Cereal Milk and Bruce Banner are two strains with massive potencies that contain Bisabolol.

Myrcene will have the taste and aroma of earth. The terpene is common and helps induce relaxation. So many strains that offer relaxation have this terpene at high levels. Grape Ape and Blue Dream both have these terpenes.

Pinene has the aroma of pine along with the ability to manage pain, anxiety, and stress. Mango Tango and White Runtz are two strains that contain this terpene.

Pink Starburst can be a bit pricey at $50 to $55 per 1/8th of an ounce. The full oz. is going to cost $360 to $380. You always want to shop around as certain dispensaries might have special relationships with cultivators of certain strains.

Don’t opt to head to a seed bank for Pink Starburst as it is likely not worth it due to the small yield. It is actually illegal to order seeds online to have them delivered by mail. You don’t want to risk a fine or possible arrest by having these delivered.

Head to your local dispensary for seeds as a seed bank getting you into legal trouble is not worth it. The nursery you head to can be a very useful resource if you know of one in the area. Fellow growers can be a great resource to get seeds with incredible genetics.

Too many politicians and pharmaceutical companies talk down on marijuana as medicine. They do this while investing millions in ventures to start when marijuana is finally federally legal. Pink Starburst can help with the following medical conditions:

The CBD content hovers around 1 percent so it is better for people with severe conditions like fibromyalgia to seek out strains with higher CBD content. Do not believe that just because a strain is low in CBD that it has no medical benefits. THC has medical benefits and is also the compound in marijuana that gets you high.

Pink Starburst is such a unique strain that has wonderful genetics. You want to try to grow this strain if you do not smoke much as the yield won’t amaze anyone in the slightest. Pick this strain up when you get a chance and have a solid budget to spend on weed.

Pink Starburst is a strain that you’ll have to try as it truly can get you up and going. What is a strain named after a classic candy that gave you a burst of energy?