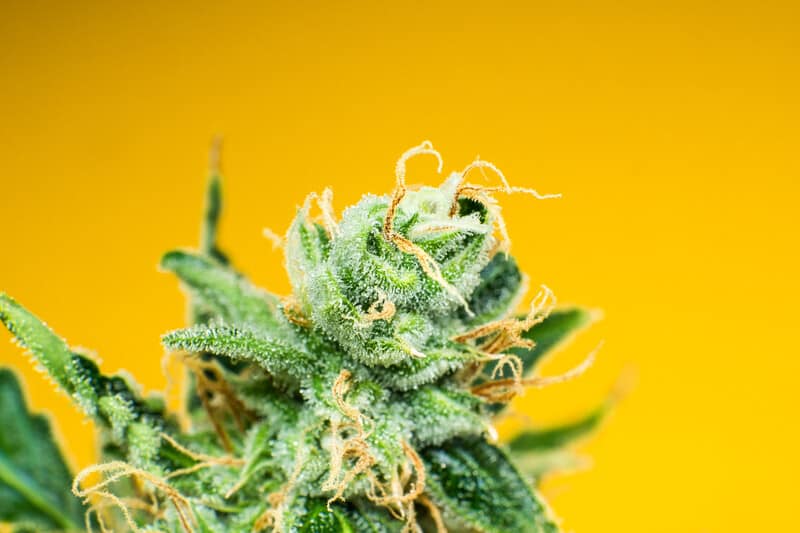 The Golden Lemon strain comes from genetics that are popular. The strain is going to be potent so don’t let the delicious flavor fool you. Beginners should toke with caution or opt for a strain that has a THC percentage in the lower teens.

Strains that are bred in today’s world have both potency and flavor. Golden Lemon is the perfect example of how far genetics have come in the current marijuana market.

Is Golden Lemon an indica or sativa?

Golden Lemon is a 60/40 Indica-dominant hybrid of Lemon Skunk and Kosher Kush. You will feel a sense of energy along with some creative motivation. Your body will be relaxed as your mind is stimulated in a pleasurable way.

Lemon Skunk can be that great strain to smoke in the morning for some energy. The beautiful flavors of citrus in this strain should not distract you from its 22 percent THC. The strain will allow you to have energy while being as relaxed as if you were sitting on the couch.

Kosher Kush has actually been blessed by a rabbi. The 25 percent THC is something that should be reserved for experienced smokers. Your worries will be wiped away which makes this an ideal strain to consume before bed.

Golden Lemon is not going to wow anyone with a massive yield. Indoors you can expect a maximum of 0.5 ounces per square foot. A grower can expect around 6 ounces when grown outdoors.

The flowering phase of Golden Lemon only lasts 6 to 7 weeks. The yields are low so this is unfortunately expected. Growing the strain should not prove too difficult though which is a happy surprise for growers.

Golden Lemon is bright green with some orange hairs. The trichomes have an amber hue and cause each nug to sparkle.

Finding strains that do well in your local climate can be important. You can always bring the plants inside during storms if you have a grow tent or two. You don’t want a grow lost to a flood or plants broken due to high winds.

Golden Lemon has a THC content of 20 to 23 percent. The strain doesn’t reach levels of certain strains but is potent enough for most consumers. Tolerance plays a huge role in how much a person can handle when they are smoking.

Seeds are available online and can be ordered/delivered. The legality should be the concern here as it is not federally legal to receive or ship seeds in the mail. You want to go the legal route when acquiring anything to do with growing weed.

Finding Golden Lemon seeds in a dispensary or from a cannabis nursery are other possibilities. You would rather your seeds come from a reliable source that you can visit time after time.

Prices of weed strains are going to differ immensely across the country. Some states have an abundance of weed but massive taxes. Others have a plentiful inventory but not enough locations of dispensaries to make it convenient for everyone. There are also growers that have coveted products that helps drive up the prices due to the demand.

You can expect to pay $40 for an 1/8th of Golden Lemon. The full oz. is going to run you around $250. Once you take taxes into consideration, you could be paying well over $300 per ounce.

The taste of Golden Lemon is of lemon and citrus. The aroma will be dank and herbal which adds to its appeal. The terps you will find in this strain are Camphene, Terpinolene, and Myrcene.

Camphene has the aroma of pine needles which makes it a favorite. The oil has been used in the past for everything from fuel for fires to decreasing inflammation. You can expect this terpene to be in Bruce Banner and Red Dragon next time you purchase some flower.

Terpinolene has a great aroma of lilacs and apples. The terpene can help induce euphoria and calm. Two strains that contain this terp are Alien Rock Candy and Lemon Diesel.

Myrcene has an earthy taste and allows the mind/body to relax. Strains that you will find this terpene in are Jungle Cake and Wedding Cake.

Pot has helped so many people live normal lives due to helping them in certain capacities. Golden Lemon can provide relief to the following medical conditions:

The CBD levels are decent but not enough to treat certain conditions. Adding CBD to your daily routine can be done in so many forms. The convenience of acquiring and using CBD is better in today’s world than in the past.

Golden Lemon is a strain that is created from two classic strains that a number of people swear by. You are going to be surprised as to the flavor that you cannot get enough of. Use this strain to get things done or relax having fun conversations with friends.

Growing the strain can be done by beginners without an issue. The right soil mixture and watering schedule will be paramount for any strain. Look at a few grow diaries so you can find out any tips that will help make growing this strain a breeze.

Golden Lemon is a delicious strain with a beautiful high. What are some strains that you swear by that taste like lemon?