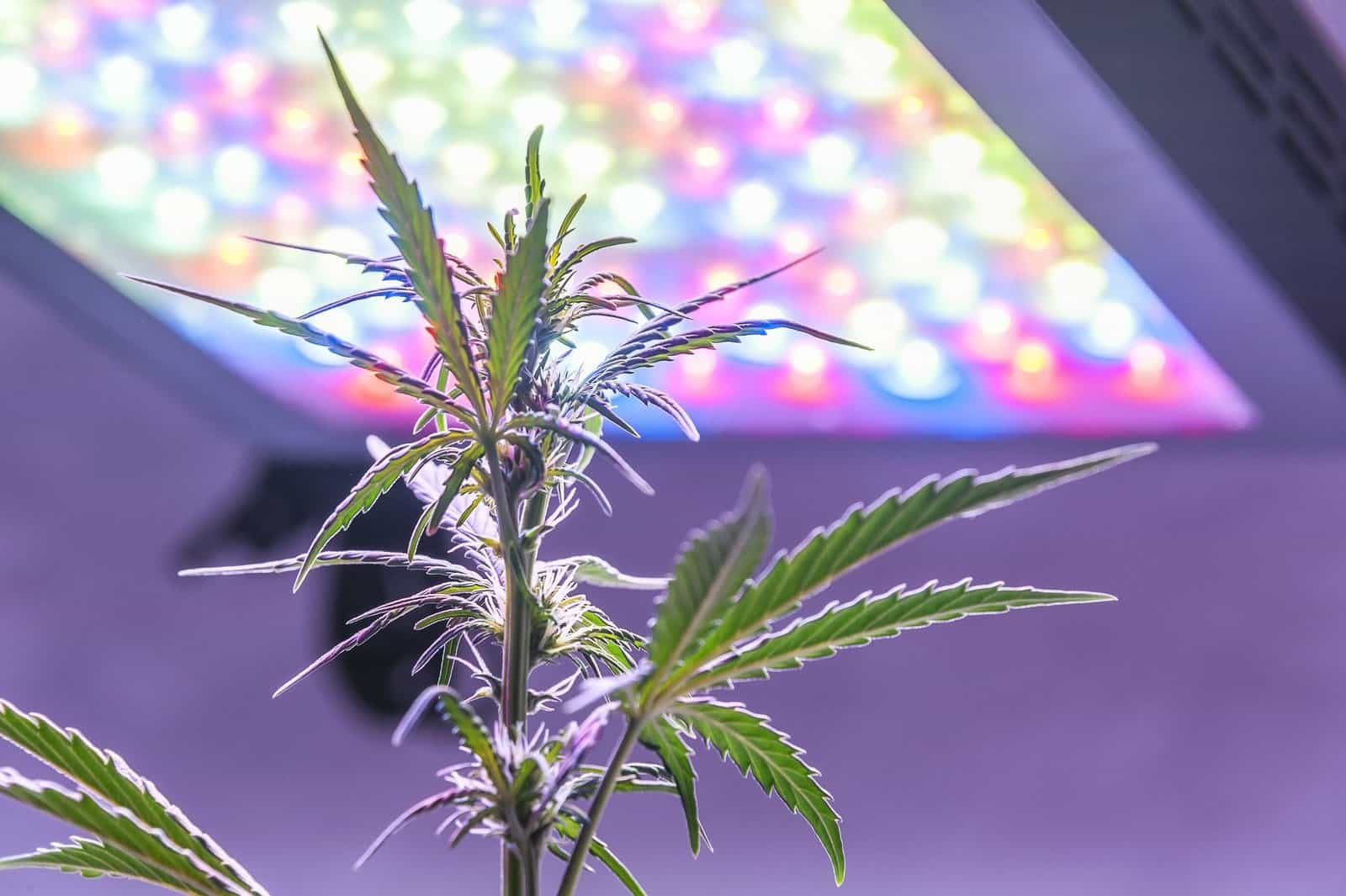 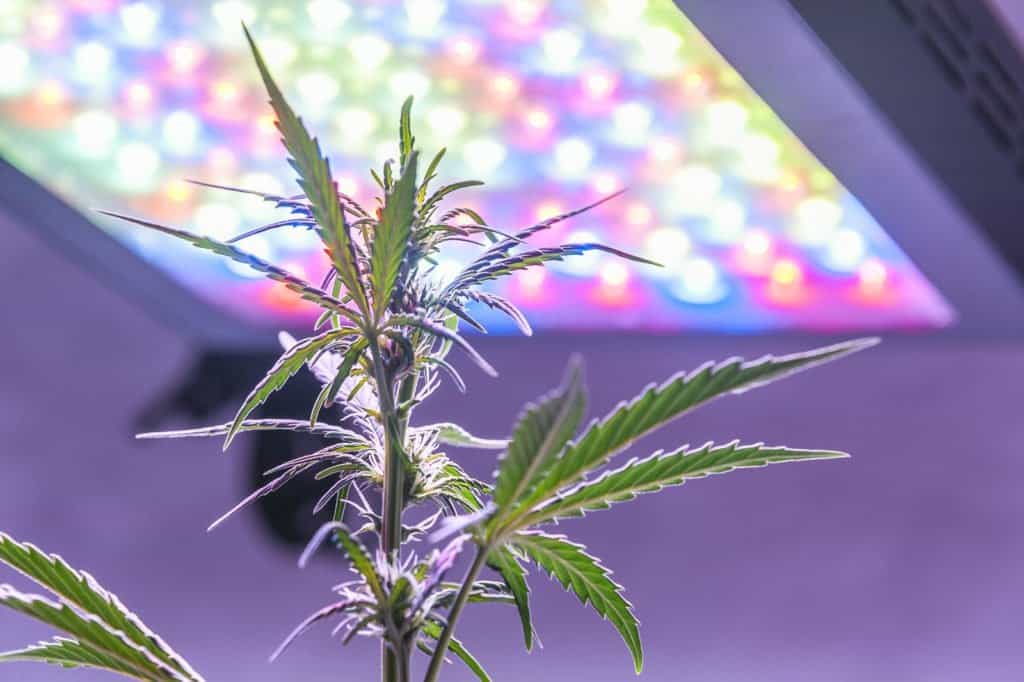 Growing cannabis indoors provides some distinct advantages when it comes to the level of control that’s possible. While growing outdoors provides its own unique benefits, there also are uncontrollable variables that make it less certain than the full controls and automation possible indoors. Not only are factors like temperature, humidity, and air flow under the grower’s control with meters, but lighting and light cycles are easy to change or customize at the discretion of the gardener.

As well as the duration of light provided, the grower is in the driver’s seat when it comes to the color spectrum of light provided to the plants as well as when that light is applied to the grow. As any indoor grower knows, full-spectrum lighting is necessary to grow high-quality cannabis. Basic incandescent and fluorescent bulbs won’t cut the mustard for growing cannabis. Specialized, full-spectrum grow lights in either High-Intensity Discharge (HID) or Light-Emitting Diode (LED) models are the most common options for growing high-quality marijuana flower. Both are readily available, and the quality of LEDs has increased significantly during the past several years.

When people refer to “full-spectrum light,” they typically mean natural sunlight or a specialized light bulb that captures a fuller spectrum of light than common bulbs available on supermarket shelves. Full-spectrum lights are not only useful for growing plants, but also for other specialized purposes, such as properly maintaining reptiles in captivity, particularly many diurnal (active by day) lizard species like iguanas and monitors. These animals require full-spectrum bulbs to produce a usable form of vitamin D3 in order to process calcium properly from their food. Without it, their bones can become weak and rubbery and ultimately break, or at the least seriously jeopardize the health of the animal. Many plant species—including cannabis—have similar specialized lighting needs.

Full-spectrum light extends beyond the visible light spectrum for humans, which falls between 390 and 700 nanometers (nm). Plants require an even fuller spectrum of light for photosynthesis and growth. The full-spectrum light they require includes different colors of light that correspond to different light wavelengths. Cannabis grows particularly well under different spectrums of light, and their different colors, at different stages of growth. With indoor grows, what the plants benefit from the most initially will change as they mature.

HID Lights and Their Colors

The most common type of light used to grow cannabis indoors are metal halide (MH), high-pressure sodium (HPS), which are HID lights, and LEDs. Let’s evaluate the spectrum of light emitted by MH, HPS, and LED lights in more detail to gain a clearer understanding of the specific applications and benefits of each.

Metal halide lights, although not used as much as either high-pressure sodium or LED when it comes to cannabis lighting, still has value for growing high-quality flower, although it’s more limited—and the reason is quite simple. Although a useful grow light, metal halide is of greatest use during the beginning stages of a cannabis plant’s growth. The blue light MH emits is very bright, and seedlings and young clones will grow well with it. Blue light is particularly useful during the vegetative stage of growth because the plants will grow short and stout, with healthy, large leaves to absorb the maximum amount of light. Blue light doesn’t force plants to stretch out to reach the beneficial rays. Instead, the plants develop extensive root and vegetative growth under blue light.

This MH blue light closely simulates the quality of light that young cannabis plants experience outdoors during the spring months. As the days grow longer and the sun rises increasingly higher in the sky, the bright light it produces includes the spectrum captured by MH. After the summer solstice, when the days begin to grow shorter, the sun begins to hang lower in the sky, and the quality of light begins to gain more of the red-light spectrum. Shorter days and redder light are a sign that autumn is approaching, and plants respond accordingly and begin to flower if they are growing outdoors.

Because HPS lights emit a light spectrum containing a large amount of red light, they are particularly useful during the flowering stage of the cannabis plant’s life cycle, which outdoors occurs during late summer and fall. When subjected to red light, cannabis plants begin to stretch and grow taller. Outdoors, this allows them to reach the light that’s sinking lower in the sky throughout the day and is no longer overhead. As plants stretch under the red-light spectrum, increased space between the leaves occurs prior to flowering. HPS light is very good at promoting the development of large, dense buds. Although plants under MH will develop flowers once the light cycle is switched to the 12:12 ratio of light to darkness, they will not be as robust as they would be under high-pressure sodium. The quality of the flowers will suffer as well, with high-pressure sodium coaxing higher levels of tetrahydrocannabinol (THC) from the plant.

In grows that utilize both metal halide and high-pressure sodium, the lights are generally switched from metal halide to high-pressure sodium while the plants are still fairly small and in the vegetative phase. Some cannabis cultivators are very successful utilizing just HPS throughout the entire life cycle of their plants. The plants may stretch a bit and grow a little spindly during the early seedling stage, but they will soon grow to the standard plant structure. If forced to choose between one or the other, using only HPS would be the best alternative.

Full-spectrum lighting for cannabis is intended to replicate the sun’s rays. LEDs meet this need quite nicely and are garnering increasing attention because the lights can be adjusted to capture the full spectrum of colors. As we just learned, this is not true for HIDs, which are mostly limited to bluer light for MH and red light for HPS. Another advantage of LEDs is that the light does not dissipate to the extent that it does with HID lights. Because of this, HIDs often have elaborate reflective hoods to concentrate their light in fixed areas. These hoods are not a common component of most LED lighting because the light has a more limited, 180-degree concentration of light instead of the 360 degrees from HIDs.

When it comes to LED light color, the same basic principles apply, but the lights are more versatile. Blue light in the 400-520 nm range will promote bushy, short plant growth. Green light (500-600 nm) will benefit plant response (phototropism). Red light in the 630-660 nm range will cause plants to grow taller and flower so they produce large, tight buds. Dark red (720-740 nm) is the color that’s most conducive to rapid flowering.

Because LED lights are adjustable, when growing cannabis with them, the best practice is to begin with the manufacturer’s recommendations and then adjust them to capture more of the red spectrum as flowering commences. There are some common mistakes that can occur for those who switch from HIDs to LEDs. For instance, you won’t need to water as much because the lights run cooler. HIDs emit a lot of heat and infrared light, which dries out plant soil much quicker than when using LEDs. As well as higher temperatures, humidity levels can sometimes be higher with HIDs as well.

Regardless of the types of growing lights you use, their spectrums and colors play a significant role in how the plants will respond and grow. Regardless of the lighting system, replacing bulbs on a regular basis is the best way to ensure they are operating at an optimum level so you can grow the best-quality cannabis possible.